Pakistan cricket team opener Ahmad Shahzad suffered a bad injury during Pakistan vs. West Indies’ T20 fixture. He was immediately rushed to the hospital after colliding with a West Indies batsman.

The two teams were engaged in a magnificent showdown. It was an enthralling clash that had our attention clasped completely towards it. That, until Shahzad suffered a bad injury, admitting him to the hospital. It came about after Shahzad came in the way of Chadwick Walton who was trying to reach the pitch’s end. 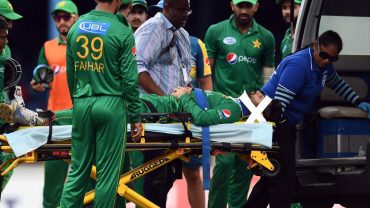 The last ball of Sohail Tanvir’s over was played by Marlon Samuels, while Ahmad Shahzad ran quickly to target the stumps but collided with Walton. He looked unconscious for a moment and in extreme pain. Shahzad was then taken off the field on a stretcher after it obviously seemed like he could not continue playing.

It’s not looking good,Ahmad Shahzad is still unconscious. I hope he get well soon. pic.twitter.com/TBDN0zFivs

It looked awful. We could understand the pain he must have suffered. Damn, it was serious. It is painful to watch him getting in the way and colliding in such a way. Makes us sick to the stomach, indeed. Poor Shahzad… 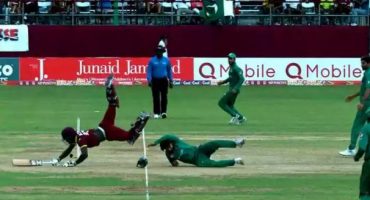 Did Ahmed Shehzad pull off a Christano Ronaldo at the field yesterday? #PakvsWI

After watching his recovery and healing , AHMED SHEHZAD is all set to be casted as new Wolverine ????????????

Tomorrow’s headlines:
Ahmed Shehzad set the world record of winning an Oscar without a movie.

Pakistani experts: You are our Virat Kohli .
Ahmed Shehzad: What is Kohli doing these days ?
Experts: He is injured.
Shehzad: Okay pic.twitter.com/WveXNFyPXY

ahmed shehzad has surely got a bright future… in acting field

But everyone wasn’t being harsh; some people really empathized with him

The injury looks terrible, never seen an ambulance on a cricketing field before. Get well soon Ahmed Shehzad.

Only a mentally sick person can ridicule someone’s injury. Prayers with Ahmed Shehzad to get well soon. #WIvPAK

I hope Ahmed Shehzad will be alright , but he is looking unconcious at the moment

Well, it’s too harsh to criticize Ahmad Shahzad and accuse him of faking his injury. It really looked serious. We shouldn’t judge him that way. He’s a great player and deserves all the respect.

Another Blast Exploded In Parachinar, The Imambargah Was The Target According To The Officials
I Was 11-Years-Old When My “Qari Sahab” Sexually Abused Me In My Own House
To Top