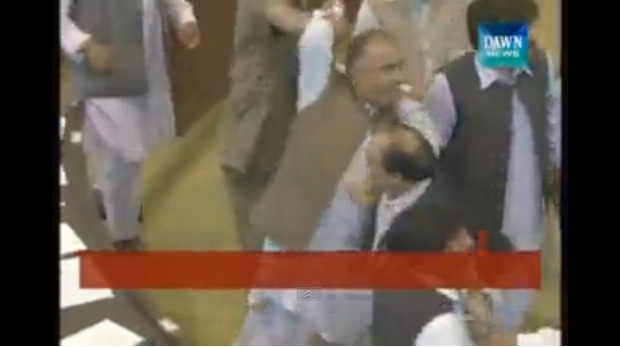 The Dharna issue intensified in the assembly when Shah Farman, the minister for public works and MPA Fazal Elahi of Pakistan Tehreek-e-Insaaf (PTI) attempted to approach the opposition seats and indulge in a physical fight with the opposition party members. The Assembly’s security staff successfully stopped them and attempted to empty the assembly hall of all of the members which were involved in the incident.

The remarks over Pakistan Tehreek-e-Insaaf (PTI) Dharna angered the members of PTI. The whole house then resounded with slurs as it became problematic for the security staff to control the angered Minister for Public Health, Shah Farman and guide to CM, Fazale Elahi.

While talking to the press (gathered outside the KP assembly) Farman, told that the leader of the opposition made hurtful comments against Pakistan Tehreek-e-Insaaf (PTI)’s female workers who he said were challenging against the survey fixing.

“He should know the difference between assembly floor and public meeting,” Shah Farman said, furthering that the leader of the opposition’s remarks on PTI Dharna were against the culture of Islami and Khyber Pukhtun Khuwa.