The impact of Dharna on PAT and PTI

As the Dharna by Imran Khan led PTI and Dr. Tahir ul Qadri led PAT failed to get the resignation from the prime minister of Pakistan, a number of differences surfaced between them and both of the leaders have began holding public meetings in order to prove that they are the more popular political party in Pakistan.

As per the reports, both the leaders are not criticizing each other publically but the leader of PAKISTAN AWAMI TEHREEK (PAT), Dr Tahir ul Qadri  and his supporter are really upset with Imran Khan’s decision to fight alone by leaving the Dharna and holding public meetings with the motive of building pressure on the government. They believe that the Dharna in the Red Zone was having huge impact on the present government while the public meetings are of less significance in politics and now the government is not under pressure anymore. 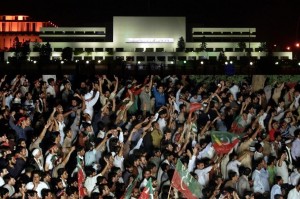 The official of the PAKISTAN AWAMI TEHREEK (PAT) and PML-Q said that each and every decision starting from Lahore March to entering the Red Zone area were taken after discussing them with Imran Khan. At a given time Dr Tahir ul Qadri decided to end his Dharna before Eid ul Azha but on the appeal of Imran Khan, the PAKISTAN AWAMI TEHREEK (PAT) chief delayed his decision. On the other hand, he allowed the supporters of his party to leave the Red Zone in phases.

As per the insiders/ sources when Imran Khan took decision to hold public meetings along with Dharna (in his Core Committee), the opinion of Dr Tahir ul Qadri was not taken and was not given confidence, that is the reason why  he got annoyed by the chairman of Pakistan Tehreek-e-Insaaf. 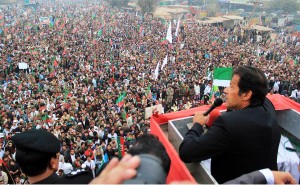 Dr Tahir ul Qadri arranged a meeting with Chaudhry brothers and many others of his allies and discussed the whole situation with them. After the meeting ended, Dr Tahir ul Qadri decided to compete with Imran Khan by carrying on public meetings. The main aim of this move was to put pressure on the government as well as to respond to Imran Khan’s decision to fight alone. As per the insiders the main aim behind holding public meetings by Imran Khan was to pave the way for elections as the Dharna has not been successful in getting the desired result. 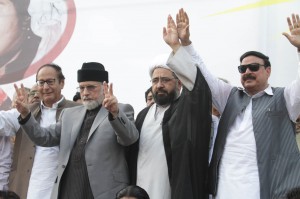 As per the PAKISTAN AWAMI TEHREEK (PAT) chief, Dr. Tahir ul Qadri, the Dharna failed to deliver the desired results as Imran Khan declared the civil disobedience movement that stimulated disapproval from all directions and miserably failed. In addition to that, the announcement of PAKISTAN TEHREEK-E-INSAAF (PTI) to hold Dharna in Lahore and Karachi and the move to practice ‘wheel jam’ all across Pakistan also flopped badly.

The ally political parties are pressurizing Dr. Tahir ul Qadri to move on to his strategy without relying on and trusting Imran Khan. It seems that, Imran Khan is also not interesting in taking an support of Dr. Tahir ul Qadri. The former allies are now seen as emerging rivals. They are constantly in a race to prove their popularity over the other party. Apparently, the fight for nation has changed its nature and has now become a fight of egos.

Virgin Galactic spacecraft in deadly US crash
Funny: Baby Dancing Like a Pro!
To Top