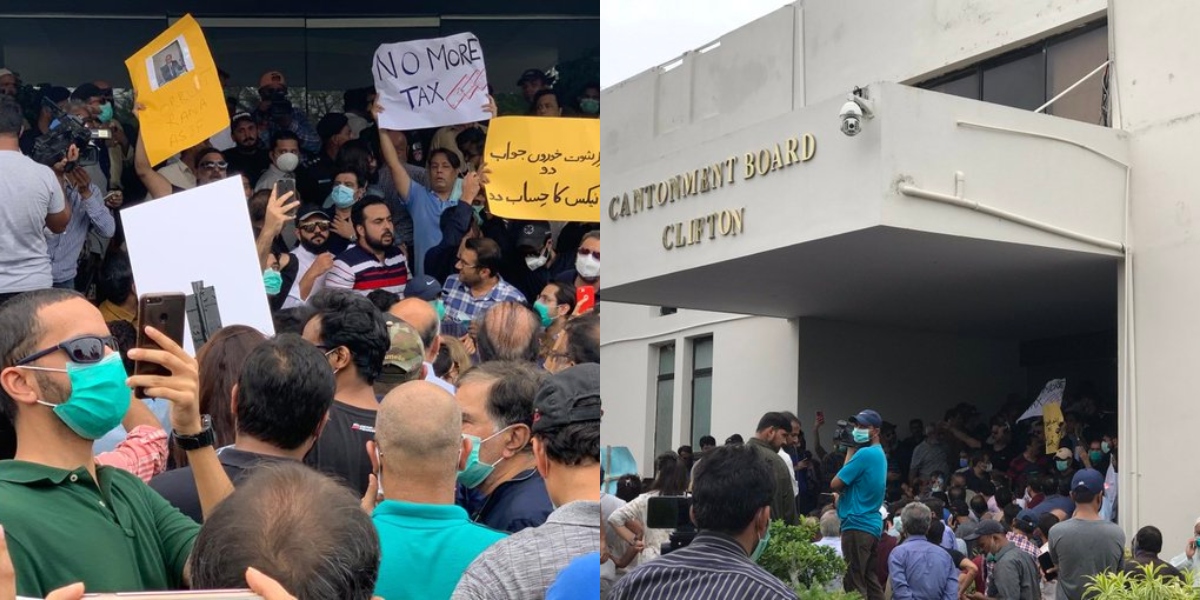 The life of the citizens in Karachi is devastated after the recent torrential rains. Moreover, the heavy rains have lashed the Pakistani financial capital last week, causing heavy flooding. The city looks like a pool. Underpasses are drenched in water and cars have sunk. Locals protests as Clifton and DHA areas are waterlogged and powerless.

Life in the city has come to an absolute standstill. Even posh areas such as the Defence Housing Authority (DHA) and Clifton have suffered immensely from this heavy monsoon rain. As a result, angry residents expressed their grief and demanded action against the Cantonment Board Clifton (CBC).

The residents staged a protest and sit-in outside the office of CBC over their incompetence in providing basic living conditions.

The protest aims to hold CBC responsible for not providing the residents with the proper supply of water tankers, despite taking all the due amount and taxes. Meanwhile, people have been complaining before too, going to the CBC office but the office has shown no response in listening to their complaints.

DHA & Clifton are flooded by torrential rains, waterlogged and powerless

Video clips on social media showed how several houses were flooded with rainwater as the area’s stormwater drains failed to ensure water did not accumulate on the roads.

Most parts of the DHA and Clifton remained without power and waterlogged for 5 days, leading to angry protests at Do Talwar on Saturday night and protestors chanting slogans against the DHA and other authorities for the poor infrastructure exposed by the heavy rainfall in Karachi.

Lawyer Jibran Nasir, along with a team of volunteers, took to the streets of DHA and Clifton on Monday and drained accumulated rainwater.

By the time this report was filed, protesters at CBC had refused to leave the premises until the board’s chief executive officer (CEO) arrived. Meanwhile, not just DHA and Clifton, the entire Karachi suffered last week when a few drops of rain showed the poor performance of political parties and officials in this city. Koi sharam hoti hai, koi haya hoti hai!