The tragedy that was planned, was swiftly subdued by the brave Rapid Response Sindh Police team at the Pakistan Stock Exchange today. Allegedly, and as claimed, the Baloch Liberation Army (BLA) took the responsibility for the attack at the PSX.

Constables Muhammad Rafiq & Muhammad Khalil were the first few men to counter the terrorists before Rangers arrived. Both Rafiq and Khalil are employees of the Sindh Police Rapid Response team from the Naval HQ. However, they were posted at the PSX were security. 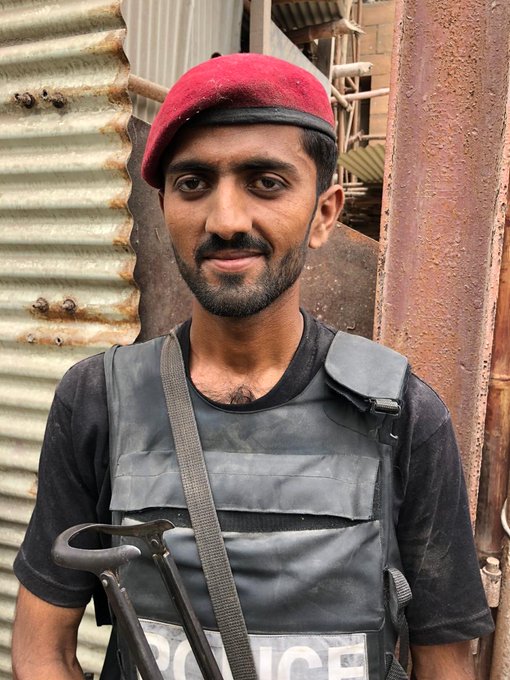 Rafiq revealed that 4 terrorists came to the PSX in a Toyota Corolla car. Just after stepping out of the vehicle, they started shooting at the guards. Countering them was one policeman and two security guards of the PSX. However, all three of them were either wounded or killed.

That is when Rafiq and Khalil stepped in. Initially, Rafiq reveals that he countered the terrorists and knew that it was going to be a showdown.

“I saw one terrorist and before he could shoot me, I shot at him and he died on the spot. The terrorists then started talking to each other saying that one more person was alive, who was shooting at us. They were talking about me,” said Rafiq.

Ice in the veins. Under-equipped and underpaid yet composed in the face of the enemy. The nation is indebted to these brave young men.
pic.twitter.com/WPepusRMmE

“They were loud so I heard it correctly. That is when I stopped firing, so they would get confused. This made them run behind for cover. They started shooting again, taking cover behind each other. One of them was firing, while the other one was throwing grenades at us.

“As soon as the other person peaked, he saw me. But I shot him twice before he could shoot me. He got injured really badly and fell to the ground. But he did not give up and tried to throw a grenade at me. I shot him in the hand, and then in the head, before he could unpin the grenade,” added brave constable Rafiq.

“After that, the remaining two started to run again, I shot one in the back and he fell down. The remaining terrorists were killed by my fellow Constable Khalil,” concluded Rafiq in his video statement.

Sub Inspector Shahid Ali of Karachi Police, who was on duty at the the entrance of Pakistan Stock Exchange, was martyred by terrorists in the exchange of fire when they attacked PSE.
Inna Lillahi wa inna ilayhi raji'un#Karachistockexchange pic.twitter.com/IzMxdUiWEY

All it took was a meager 8 MINUTES for the Rapid Response Sindh Police team to neutralize the BLA terrorists. 8 minutes ONLY! Imagine, these brave policemen, with weak bodies, even underpaid and underappreciated, managed to finish 4 terrorists only in 8 minutes.

What a great story, what a tale to tell our children. Well done RR Sindh Police team, you have done the unthinkable, saved hundreds of lives and made Pakistan proud. It seems the Indians lauding the attack have received a great surprise with this news.

Meet Constables Khalil & Rafiq – The Rapid Response Heroes Who Killed All BLA Terrorists At PSX
Here’s Why People From This Generation Are So Lonely!
To Top