With the Pakistan Super League in full thrust, every private entity has tried to make the most of the tournament, turning it fruitful for themselves. With the final match still to be played out, a massive controversy erupted on Twitter, regarding the PSL and one of its private stakeholders.

You might not know much about Dennis Freedman, but Twitter surely does. Dennis is a cricket enthusiast from Australia, who has toured the UAE and Pakistan after being funded by Pakistanis through a charity campaign. Dennis, previously, had followed the PSL, but this time, he visited and vlogged his journey. 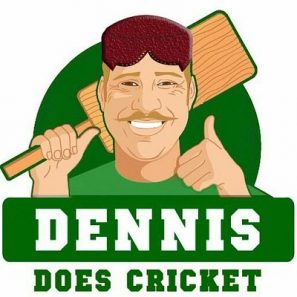 The people were loving Dennis’ tweets and vlogs, extremely fond of his love for Pakistan. However, on 23rd March, on Pakistan Day, Dennis Freedman became subject of a huge controversy after he tweeted against the Pakistan Day Parade. 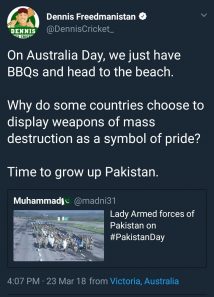 The tweet, which has now been deleted, reads: “On Australia Day, we just have BBQs and head to the beach. Why do some countries choose to display weapons of mass destruction as a symbol of peace? Time to grow up, Pakistan!” 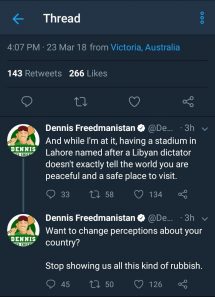 After this, Dennis further went on to say that naming the stadium in Lahore after a Libyan Dictator (Gaddafi Stadium), was a bad move as well. As soon as these tweets were out, Pakistani Twitterati started calling Dennis out, giving him the rudest of all awakenings, saying that he was nothing but a hypocrite.

Dennis has been literally sucking Pakistan’s balls for the past 2yrs. Got a contract with PSL, got a sponsored free trip to Pakistan. Now he speaks his mind nd gets lynched online by pakis ? https://t.co/BkhgrngZmb

All the Pakistani Twitter lauded and cheered for @DennisCricket_ when he trolled India and lauded Pakistan. Now that he gives his personal opinion on Pakistan, they’re bashing him. Grapes are sour?

Dennis,do you even know how it all started? West’s favourite dictator Zia Ul Haq crash landed Pakistan into the soviet afghan war. Left wingers in Pakistan were tortured to death. Gaddafi stood with us & opposed Zia while you did nothing. Where was Australia when zia tortured us?

Welll !!!! Pakistan is all grown up man and exactly that is the thing we need to show it to our neighbor whose 8 times bigger than us .. and would you still like to go into the details of Global operations Australia has been conducting ?? I bet you don’t .. come on Dennis 🙂

Mr. Dennis, display of these “weapons of mass destruction” is NOT to entertain your rubbish tweets but to make the people of #Pakistan feel safe against terrorists. Living in a country with no brainless neighbors is a privilege so don’t abuse it. And yes, grow up. ✌

Dennis was always a fraud. Pakistan treated him like he’s the son of George Bush (still not important, but…).

A fair amount of people do not fawn over him. He’s just a baiting troll who has Pak twitters approval because he antagonises Indian fans by throwing random insults at them. Been given undue coverage by newspapers such as Dawn or Lums when he has nothing original to say. https://t.co/uwX0n0ihdb

Dennis every great country display their weapons and arranged the military parade in everywhere in the world.
If Australia feels threats on border then you will feel importance of weapons and military. So saved your opinion for bad time. Cheers #PakistanDay https://t.co/7WkqtabkU0

Maybe, the people on social media were too harsh on Dennis for his opinion. Labeling him as a ‘gora’ who was here because of the ‘color of his skin’ is going too far. Other than that, the Pakistan Day Parade is held for a reason, and our neighbors very well understand that.

These Pictures Of Molana Tariq Jameel On Feroze Khan’s Nikaah Are Going Viral On Social Media!
Military Helicopters Were Used To Dry Wet Pitch in a PSL Match And The Internet Lost It
To Top