Dehli-Based Restaurant Introduces An Article 370 Inspired Thali In Support Of The Indian Government!|Parhlo.com

A Dehli-based restaurant called Ardor 2.1 is gaining attention for their thali inspired by the article 370 and the on-going problem with Kashmir.

Serving A Thali Designed According To The Article 370:

The restaurant is known for their thalis paired with the addictive taste, and has been a popular spot for the locals. However, now the place has come up with a marketing strategy that drags in the revocation of the article 370; a decision that has been the major reason for the current chaos within the region. The citizens of Kashmir have been unable to visit or contact their loved ones because of the restricted ways of communication. And the Indian military is still posing multiple threats on the Kashmiris that are going against the decision, as a whole. 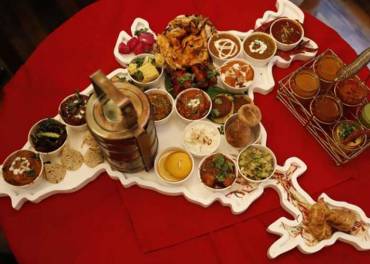 The thing is, this gesture from the restaurant can be seen as an optimistic action from India’s side because it favors the region to be a part of India. Ardor 2.1 mentions that Kashmir has always been a part of India. And that has been officially announced and confirmed  through the revocation. If people from Jammu and Kashmir visit the restaurant with their government cards then they get a discount of INR 370. Moreover, the restaurant will also be donating to the Kashmir Relief Fund to help the citizens of Kashmir. The owner, Suvvet Kalra mentioned, “We are a secular country and to survive in peace and harmony, each one of us needs to make an effort. This is our contribution to the flavours of the nation, to stand together united as one big family.”

Is This A Good Decision?

The dishes within the thali consist of traditional Kashmiri food. They have been gaining praise all over the nation of India. However, Kashmirs have never considered themselves to be a part of either Pakistan and India; at least, a good portion of them. They have been the center of an unwanted war where their culture and rights have been diluted. So they wish for peace and a future where the two nations don’t have to fight for its possession.

This isn’t an issue that one can lightly brush off by including a couple of dishes. It, basically, supports India’s horrific decision of revoking the rightful article that protected the Kashmiris.

It still remains as one of the most selfish and inhumane decision that any leader has made in this year. Though, the fact that they are donating to the people of Kashmir remains as a positive gesture. But supporting the actions of the Indian government still seems problematic. This isn’t even a concern of bringing each other down, but genuinely any foreign country can understand that what happened to the Kashmiris is dangerous. Even though, India is always trying to manipulate the international media to cater for the country.

What do you think of the situation? Do you think that this is a positive decision from the restaurants part? Or is it insensitive to the current stress and concerns that the people of Kashmir are going through because of the revocation? Share your thoughts using the links provided below.

Sonya Hussyn Just Shut Off Yasir Hussain’s Troll On Her Picture And Damn, She’s Savage!
Kashmiris Expose The ‘Normalcy’ & Brutality By Indians And The Details Are Extremely Disturbing!
To Top