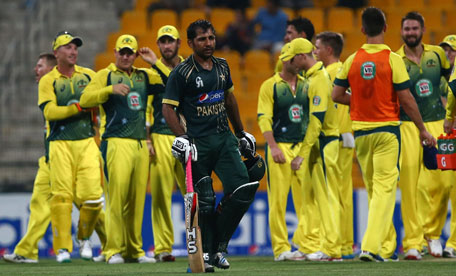 You can’t stop abusive words flowing out of your mouth when you leave Pakistani team at the score of 150/3 in 30 hoping they will easily chase target of 232, but on your way back you find, the so called lion choking at 230/9 with Muhammad Irfan facing he last few deliveries.

I felt like blasting the television screen on watching the yet-once again crumbling of Pakistani team against Australia in the last ODI of the series.

You can even expect any weak team to pull the match off from that point when you have got wickets in your hand and two of your top order batsmen seem to have set on the crease. But, No. We, the lions, are the entertainers.

We make sure that audience, no matter form which country they belong, get to see the nail biting competition and take the match to the last over. In that quest, we suffered this defeat and have suffered numerous in the past.

The defeat to Australia could not come at any worse time than this when the Cricket World Cup 2015 is just a few months away and losing to host team of the world cup at our home ground just gives us a rough idea of Pakistan’s performance in the coming mega event. 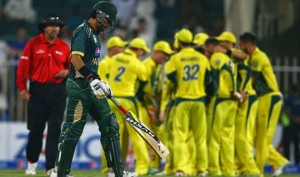 I’m not disappointment with the Pakistani team’s defeat but by the way they gave up. This is conspicuous in all the recent matches Pakistan has played. The fist ODI was the similar show in which we choked to the dismal total of 162. In the series’ second match, our openers resisted their way through tough Australian bowling attack to opening partnership of 126.  But, we maintained our perfection by surrendering to the total of 215, which was quite an easy target for Aussies.Though you can blame Sohail Tanvir trying to be a braggart in the end when just a single run would have tied the match but on whole it’s that thing again wholly responsible for this –‘the batting order’. The debacle of the batting order remains our USP.

I’m not here to present the entire gloomy picture or de-motivate the fans, but our poor performance and historic traces don’t make us favorite for the coming cricket world cup 2015.

Moreover, the luck doesn’t seem to fall our way. With Ajmal’s ban, he doesn’t seem to get rid of it any time soon and Mohammad Hafeez has also been reported for the suspected action. These developments have de-motivated the Pakistani Shaheens. Cricket is also about making bold decisions on the field and off the field. With current defeat to Australia, we witnessed the lack of aggression and bold decision making by the captain and the management.

The fear reflects in the defensive way of playing cricket among the team players. Misbah’s pulling out of the team in the last ODI was the act of cowardice and showed the lack of spirit in the pavilion. The great Imran khan’s words can give the boost to the the team dying in spirit. He often said fear prevents you from taking risks and unless you take risks with bravery you won’t make big successes. 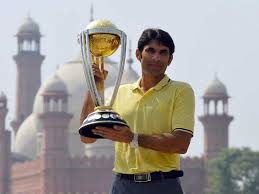 The same aggression less attitude and weak body language of players were witnessed in the series. With Misbah withdrawing from the last ODI is an act totally against Imran Khan’s cricketing philosophy. It was the time Misbah, better had come up as a courageous leader not afraid of dying and loosing and leading the boys himself.  Otherwise, what was the reason that the team requiring 80 runs with 7 wickets in hand with ample of Overs couldn’t make it.

Misbah-ul-Haq has a great potential. He has successfully led the almost ‘dead’ Pakistani team and taken it to the peaks. Highs and lows are parts of the game. He, may be, is going through the lows. But, this is the time when his leadership skills as a captain and spirit as player is tested. He needs to adopt a progressive approach. Moreover, some sort of changes to let the team freshen up is needed. The move to replace Kamran Akmal with Sarfaraz Ahmed was a positive one and we witnessed the positive impact of it. There stands no chances of changing the captain, pretty much cleared by PCB chairman recently, and rightly so because Misbah knows the game dynamics and team characteristics more than anybody due to the experience of captaining the evolving side for 4 years so he deserves to be the captain of the side for upcoming World Cup.

The series with Australia wasn’t the last one as there are two more series coming up against the hosts of the Cricket World Cup 2015. So, it gives an opportunity to Pakistani team to learn and consider this as stepping stones towards the bigger event. The progressive approach is the key to victory in forthcoming series’. The team is full of talented and match-winning players, they just need a boost up and right frame of mind to pull the great victories ahead. We all love our boys in green and hope and pray for the great victories ahead and most importantly we are and will remain with you through every thick and thin.

5 reasons Bilawal Bhutto’s Jalsa on 18th October will be the biggest in history of Pakistan
Jaali ya Sub Pe Bhari? Bilawal Bhutto Zardari to Launch His Political Career “Saeen” Style!
To Top