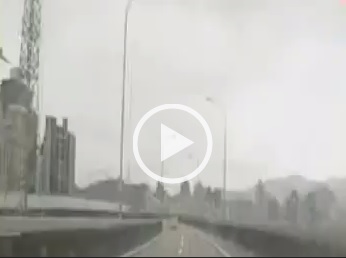 A TransAsia flight clipped a bridge shortly after takeoff and plummeted into the Keelung River, just yards from the shore, near the island’s capital of Taipei on Wednesday. At least 15 people have been killed.

A toddler is among the survivors of the GE235 crash.

A taxi driver hit by the aircraft is reportedly being treated for a head injury.

A total of 58 people were on board the domestic flight, with at least 15 people killed and dozens injured.

As many as 31 passengers were from mainland China, Taiwan’s TVBS news broadcaster said

The last communication from one of the TransAsia flight 235’s pilots was “Mayday Mayday engine flameout”, according to an air traffic control recording on liveatc.net.

A car’s dashcam recorded the moment the plane banked sharply and crashed into the river.

The country’s Central News Agency said the plane was travelling from Taipei to the outlying island of Kinmen when it lost contact with flight controllers at 10:55 a.m on Wednesday.

It is the second of TransAsia’s French-made ATR 72 planes to crash in the past year. Last July, a flight crashed while attempting to land on the island of Penghu off Taiwan’s coast, killing 48 people and injuring another 10.

The article was first published in The Independent