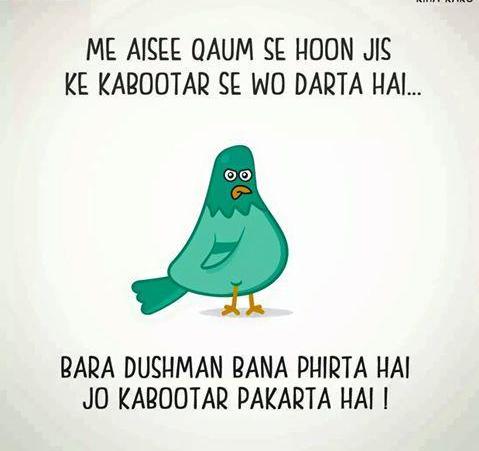 Dear India (you ain’t dear to me at all), what with your daily accusations and shit, I decided to send you a pigeon.

Since you guys are demanding war, I decided to send you a pigeon which sits on my roof with its whole family and attacks my house with all its droppings. That’s like a perfect weapon. A pigeon flying over your areas shooting away that white droppings.  The *Urdu* inscription you guys found on it was basically my little wish, I was asking for *baray ka gosht* since it was a meatless day here when my fighter kabootar departed. And you wanted someone to decipher the code! Poor!

Last year, the kabootar you caught near Pathankot, that one was a real fighter. But I didn’t sent it intentionally. I was somehow singing *kabootar ja ja ja* , poor thing took it seriously. But good you caught that one. That one used to eat my split AC ki taarain and I had to call Nisar- the electrician all the time.

Dear India (lol, dear), seems like you guys are too farigh like me. I have nothing to do except troll a bhaarti soorma on Parhlo’s Facebook page who was born with a fault. Apparently, he (I dont know he hai k she, which reminds me, my father till last year believed Amitabh Bachchan is a woman) can’t speak any word other than Porkistan while worshiping his mother and I am eyeing that mother, *hanji, *puth* ki tou nihaari banegi*.

So coming back to your faraghat, you talk about war, you are shit scared !! Aik kabootar se darr gae??? Larna chahtay ho, tou maidaan main aao, its not the kabootars you should be scared of. Its the droppings. I have sent for you a fighter. A real fighter. Meow !!!!

P.S: There are more on my roof. Bhejun kya??