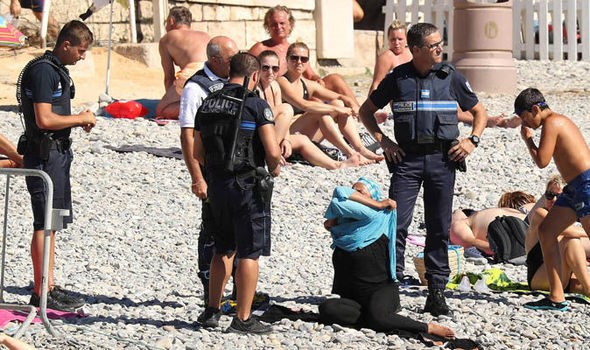 Armed French Police have recently forced a woman to remove her covering attire (aka Burkini) on its beach in Cannes. Why? Because Laws: Laws that promote Liberty. What liberty? Liberty that can only exist if a woman is naked or least covered.

Here is my open letter to France:

May I ask you to please stop being so adamant in objectifying a woman’s body? It’s a body that has a soul. It’s not an object to attract tourists, consumers and clients so that your businesses could thrive. A woman’s body is her property. Not any government’s and not any business’s for sure.

Treating a woman like a walking piece of flesh is the greatest insult to her self-esteem. A woman is a human. And if I am not mistaken, it surely has a soul. It’s not anyone’s property to make use for minting money. It’s a woman’s choice what she wears. If a woman chooses to promote your brand by being a bikini clad model on your business’s billboard ad, so it could attract eyes as the cover model for your magazine and its sales increase or sell your cars in skimpy clothing; it should be her choice! FORCING a woman to remove her clothes so that your beaches become more attractive and aesthetically ‘pleasing’ to tourists; it is nothing but objectification in the purest form.

Most women, if not all, set a line that they don’t want to cross: a line that defines their self-respect. The measure of that respect and dignity lies on how she defines it. Forcing a woman to be naked or less covered, so she becomes an eye candy to make sure your businesses could blossom: it is nothing but a direct attack on their self-respect.

So, My Dear France… Stop being so resolute in making sure a woman’s body is objectified. A woman deserves respect; respect them. A woman’s body is not a walking piece of flesh. Not an eye-candy. It’s not there for making sure your tourism and other related industries could flourish. Not at all… Monsieur!