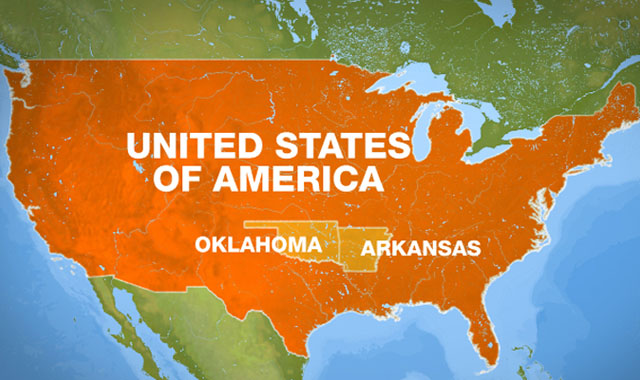 Tornadoes have ripped through south-central areas of the United States, killing at least 14 people in Arkansas and Oklahoma, officials have said.

Two people were killed in Vilonia, a small town in central Arkansas of some 3,800 people, and rescuers were digging the rubble of ruined buildings looking for more victims.

A spokesman for the Faulkner County Sheriff’s office in Arkansas said there was a “mass casualty situation”, and the number of people injured was reported to be numerous.

A person also died in a tornado that tore through the nearby town of Mayflower, 35km northwest of Little Rock, at about 7:30pm, officials cited by the Reuters news agency said.

About 45 homes were destroyed and a lumberyard was damaged, said Will Elder, an alderman in the city of 2,300 people. He said at least one person was injured.

The tornado passed through the east side of town, tearing up trees and bringing down powerlines, making it difficult for the emergency services to find stricken areas in the the darkness.

“It’s extremely hazardous here right now,” said Elder. “The power lines are down, roads are blocked and they will have to proceed with caution.”

Three people were also killed in western Pulaski County, according to the sheriff’s department.

Meanwhile, at least one person was killed in a tornado in a small Oklahoma town in the northeast corner of the state, according to Ottawa County Sheriff’s Department spokesman Derek Derwin. Media and the National Weather Service reported that two people were killed.

That twister was spotted in Quapaw, 322km northeast of Oklahoma City at about 5:45pm, according to the weather service.

An Ottawa County police dispatcher said a search and rescue effort was underway in Quapaw, but could not confirm reports of fatalities.