For all the comic book enthusiasts who waited for this movie for 3 years and it’s finally out, did it live up to its hype? Should the reviews be taken seriously? Were the fans satisfied with what they saw? Well, all of these questions will be answered, but be warned – this is a full movie discussion so it naturally would contain a lot of spoilers.

This is your final warning.

So the movie starts out brilliantly. There are a lot of Watchmen vibes coming from the opening sequence and it makes you think – or rather, hope, that all the reviews were incorrect and that this was a major conspiracy against DC. The bad news is that this isn’t the case, but let’s talk about that later. The opening sequence consists of two events over lapping each other. One is obviously Bruce’s origin story and how his parents got shot in the valley and the other is sort of like a dream sequence (the movie is filled with those) where Bruce is seen running away from the funeral of his parents and then inevitably falls into a cave filled with bats. Even though I was really against the idea of seeing Bruce’s origin story once again, this sequence turned out to be beautifully done. 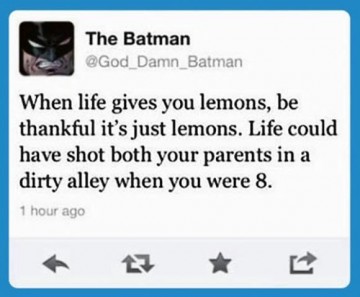 The build up of the movie, the starting 30 minutes, are brilliant. You are introduced to Ben Affleck first and the whole destruction of Metropolis from his point of view is shown. Affleck is spot on as Bruce Wayne and till date is my favorite portrayal of my favorite character. Actually every Bat-Element (Gadgets, Alfred, the Bat-Mobile) in the movie is awesome. For the very first time we saw Batman who could actually fight, who had badass gadgets and knew how to use them and whose Bat-mobile is so freaking rad. 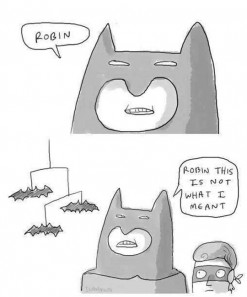 Batman was the major spotlight of the movie – well, at least he was, before the whole showdown between Batman and Superman took place. We are introduced to Lex Luthor in the early minutes of the movie – and he was the biggest disappointment of all. I inexplicably supported Jesse Eisenberg when he was cast as the brilliant sociopath even though I wanted Bryan Cranston to be cast as Lex. But you’ll start to hate him minutes after he’s introduced because he’s not the Luthor we know and love. He doesn’t have his class or his intellect or his charm. If anything, his portrayal as the iconic character screams out, “Wanna-be Joker”. 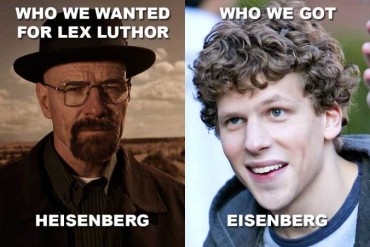 His plan is flawed and his motivations for hating Superman aren’t justified at all. He doesn’t have any agenda and like many things in the movie he lacked development and motivation. The biggest problem in the movie that was consistent in Man of Steel too was the inexplicable and inevitable presence of Lois Lane. She, for reasons unknown, was present at each and every place where the major events were happening. How was she everywhere? Is she a meta-human herself? Does she have transporting abilities? Will she be leading the Justice League? (sarcasm intended). Lois Lane had more screen time in the movie than Captain America did in the avengers and if that isn’t wrong I don’t know what is?

Now let’s talk about the epic showdown we were all waiting for, Batman vs Superman. The whole fight sequence is perfectly choreographed. There are moments in the fight where you’ll literally drool.

But it also lacked motivation and justification. What happened that was so bad that Batman tried and almost succeeded in killing Superman?

Why didn’t Batman just straight up talk to Superman about his issues? 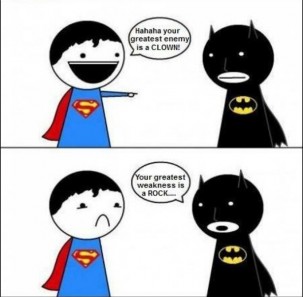 source: thegoddamnbatman     (okay, maybe this is why)

Why did Batman instead choose to fight a being that destroyed Metropolis? Didn’t he think about the outcome of this battle and how much property damage will they be dealing with after the fight? Batman is a sound and logical human being. He surely would have tried to talk the boy scout first instead of taking him head on. I was so excited when I heard they were adapting iconic and legendary “The Dark Knight Returns” by Frank Miller. 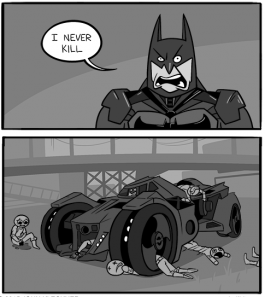 In the comic there was a long and detailed back ground which justified every step Batman took against Superman. But even in the comics Batman wanted to prove a point by maiming Superman. He never intended to kill him. Another problem in the fight is Batman’s cowardice. He is the freaking Batman for crying out loud. He never surrenders. He is the man who dodged Darkside’s Omega beam. He almost always comes up with a solution for any and every obstacle. HE DOES NOT BACK DOWN. But sadly at one point during the fight Batman got so scared of superman that he literally raised his hands in surrender. He got scared of Superman. He is the one person who is not afraid of anything and Zack Snyder made him scared of the last thing Batman would ever be scared of.

Now let’s talk about the last battle i.e the battle between the Trinity and Doomsday. First of all there was no need to introduce Doomsday in the movie. His character was very rushed and was misused. The whole fight sequence is terrible. There is a whole lot of confusion in the whole sequence. Batman is running away from Doomsday in most of the fight and at one point tried to block out Doomsday’s heat vision with HIS HANDS!!!! WHAAAAAT ?

And then Wonder Woman came to SAVE BATMAN. Oh my god I think I bled a little.

The most important point to note is that Batman who was so against Superman for “destroying” Metropolis, led a rampaging murdering monster to a heavily populated area without a sound plan. Batman is the freaking modern day Sherlock Holmes. He’s always two moves ahead of his opponents because of his intellect and his strategically brilliant mind but none of these elements were present in Ben’s Batman. Then they went ahead and destroyed another iconic arc of all time, “The Death of Superman”. Superman is murdered by Doomsday just after a few punches and his death till date is the most meaningless death in a movie.

Everyone should have cried their hearts out when Superman died but no one did because the whole scenario was stupid. No one felt even a little bit connected to Superman. No one felt sad for him. 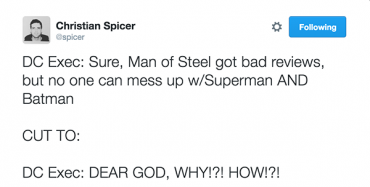 The entire movie lacked development, characterization and motivation. Everything was happening for one reason or another. We, however, were never made aware of those reasons. The whole movie was rushed and there were a lot of things that could have been easily taken out of the movie but weren’t.

Batman and Wonder Woman show great potential though. Their individual movies may turn out to be awesome if they get it right and don’t repeat their mistakes again.

Wonder woman was a total badass. Her stance, costume and everything were spot on. I would rate it 6 out of 10 just because of my immense love for Batman. Everyone, including myself, were super hyped for this movie, and it saddens me to say that all the reviews were correct. And this is coming from a long time DC fan.

Snyder, we trusted you and you failed us.