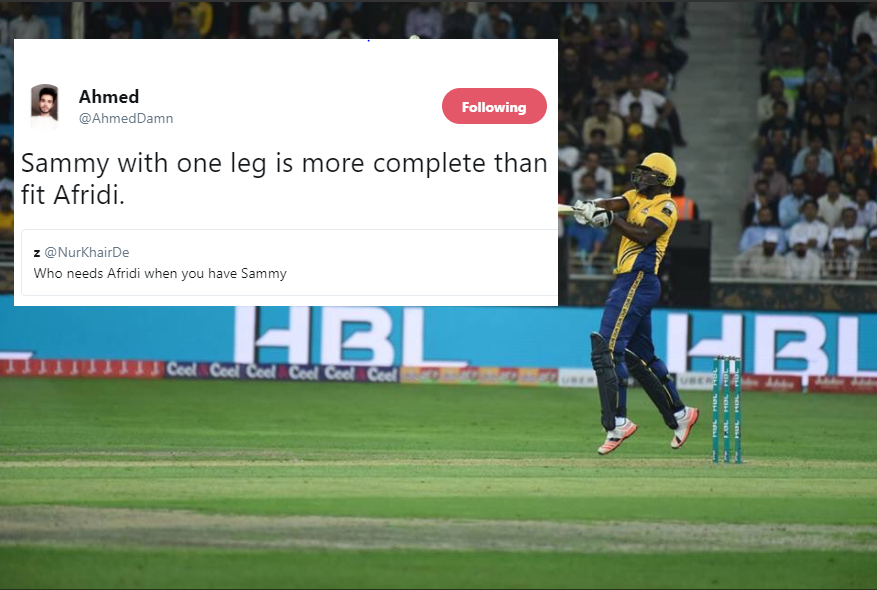 Yesterday’s match between Peshawar Zalmi and Quetta Gladiators was one of the most thrilling matches of this season’s PSL edition. In a nail-biting Pakhtoon derby yesterday, Zalmi came from behind and claimed their victory against the Gladiators. All of this was possible courtesy the captain of Zalmi, Daren Sammy!

Like a dedicated captain, Sammy did everything within his capacity to lead Zalmi with the victory. Zalmi needed 16 runs from 7 balls and the skipper made sure he played a sensational inning to give Zalmis the victory they were eyeing. The match ended with a boundary when Zalmi needed 3 runs off 3 balls, and of course, Sammy was the man to hit it!

What Made Sammy’s Performance Stand Out So Much?

Aside from how the captain took the role in leading Yellow Storm, Sammy injured his leg and despite, he continued making the hits.

The man kept his promise! <3

A wounded lion is always the most dangerous. @darensammy88 performing when the back was against the wall. Had a chat with him before the game and he promised to deliver for the team tonight. And how well did he keep his promise! No words. pic.twitter.com/BIwNwSBjcj

Pakistanis Fell in Love with Sammy Even More After his Performance Yesterday!

What a fantastic win for Peshawar Zalmi. @darensammy88 leading from the front there. A true captain's knock. Cannot be more proud of you, skipper. Love you #QGvPZ

What a nail biting match last night..Captain inspiration, You are a true leader @darensammy88 ? pic.twitter.com/5j883ZWcxv

Yar I have never seen McCullum act like a captain idk. He is never cheering the lads up, not even smiling, not backing them up. I mean look at Sammy. He treats his teammates like a family.

Who needs Afridi when you have Sammy

if Sammy plays PSL for 2 more years our Pashtun bhai log will forget Afridi ever existed.

Darren Sammy becomes the first player in PSL to win the match for his team on one leg pic.twitter.com/pomlJnxR7E

One of the best PSL matches so far ended with a complete drama and a fight put on by Daren Sammy, the Yellow Storm indeed showed their best performance.