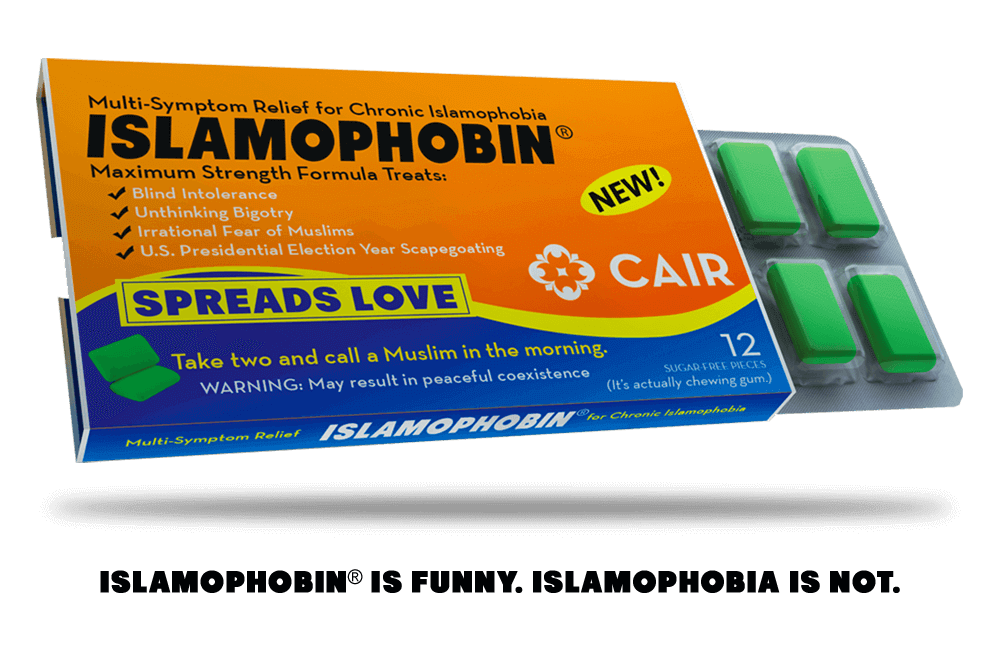 People all over the world are afraid of Muslims and their religion, Islam. Why? Because of no real reason at all. They know as much about Islam as a dog does of operating cars and thus, like the dog driving the car, they run over several Muslims and change their lives for the worse. They bully and persecute them for nothing they’ve done. Just their faith. To overcome this, a group of people from Washington, D.C. have come up with the best solution.  It’s called ISLAMOPHOBIN®, a multi-symptom relief for chronic Islamophobia.

According to their website, Islamophobin mainly serves to relieve you of Blind Intolerance, Unthinking Bigotry,  Irrational Fear of Muslims and U.S. Presidential Election Year Scapegoating. That last one is excessively important because ever since Donald Trump (the guy most of us Pakistanis know for his brief run as the owner of RAW in the WWE) started running for president, he’s been exhibiting various islamophobic tendencies. Which is basically a nice way to say that he wants to put a tag on every Muslim and ban them from crossing the border into the USA.

Yes, you read that right.

I know. We reacted the same way.

Signs that you need Islamophobin

Signs you need Islamophobin aren’t as specific or limited as you would think. Apart from the obvious ones, i.e. fearing or hating Muslims, there are several others including if you:

(3) Pray that a Muslim is not on your flight

If you do any of the above, Islamophobin is for you, my friend. Trust, me it will help.

What People Had To Say

The reception of Islamophobin was positive by majority of the public.

Does .@realDonaldTrump
know that this medicine is now available?
Watch the commercial.https://t.co/W3mcNiPZMf#Islamophobin

Take two and call a Muslim in the morning. #islamophobinhttps://t.co/5Z9THTPM3Ppic.twitter.com/u11LYBn9YQ

However, some people still didn’t quite get the message.

When MUSLIMS stop Raping Killing, and Chopping off Heads, there won’t be a need for #Islamophobin. pic.twitter.com/weRjc06kSA

Regardless of this, we all can agree on the fact that Islamophobin is an urgently needed medication and curing Islamophobia should be one of the highest priorites for not only us but also for influential people who have the ability to appeal to huge crowds of people. People like this do exist out there and with some hardwork and determination it is likely that one day, Islamophobia will be eradicated forever.

Yes, President Obama is one of those people.

Further details can be found on the Islamophobin website.

This Is the WORST Thing That Could Happen to Your Biryani
You Wouldn’t Dare Beat These Women Lightly. Or at All.
To Top