Considered as the toughest exam of the country, the Federal Public Service Commission (FPSC) based Central Superior Service (CSS) Exam, has hit aspirants hard once again. After a lot of hue and cry from aspirants on social media, the CSS Result 2019  finally came out today.

The CSS Result of Pakistan in 2019 has shocked thousands of aspirants once again, as the passing percentage of the result is a meager 2.56%. For the CSS Exam 2019, a total number of 23,403 applied for the exam, while 14,521 people from across the country appeared in the written exams.

Out of almost 15,000 students, only 372 lucky students could pass the CSS Exam this year. The CSS result 2019 has sent waves of salvation for 372 aspirants on social media, where friends and families of the aspirants could be seen congratulating their loved ones.

With this year’s result, things might soon be changing for CSS aspirants across Pakistan. The PTI government in power plans to bring major reforms to the country’s most prestigious exams for civil service, including one that will make aspirants take a screening test before appearing in the detailed subjective exams.

CSS academies from different cities of Pakistan have their work in full swing, as the deadline date for registration for CSS 2020 is October 31st, 2019. Many renowned CSS academies such as KIPS, NOA and Officer’s Academy Lahore have had their students clear the CSS Exam 2019.

The CSS result 2019 has proved once again that no matter what happens, the FPSC will filter out as many candidates as they can, making the exam tougher every year. The passing percentage of students in the written part of the exam has died down from 9% since 2009, to 2.56% in the last decade.

Candidates who have qualified for the viva-voce part for CSS 2019 now have a tough job ahead. Out of the 372 candidates who have their names mentioned in the CSS result 2019, many will bear no fruit and end up giving the exam next year, once the interview (viva-voce) part of the exam is done with.

What is the Central Superior Services Exam?

CSS stands for Central Superior Services of Pakistan. Aspirants/students from across the country appear in 11 different subjective/objective exams, in a bid to become the creme de la creme of the country. This exam brings forth the most elite and capable students from Pakistan who pledge their lives to serve Pakistan’s civil service.

This form of government is known as bureaucracy. These bureaucrats then join different caders/groups allocated in the Civil Service, which include some of the most powerful designations/departments such as the Pakistan Administrative Service (PAS), Pakistan Customs (PC), Foreign Service of Pakistan (FSP).

However, there are many other important groups in CSS as well that hold the same importance.

How can I register myself for the exam?

Every year, the FPSC brings out an advertisement for the CSS Exam, which requires a student to have at least his/her graduation done from a recognized university. 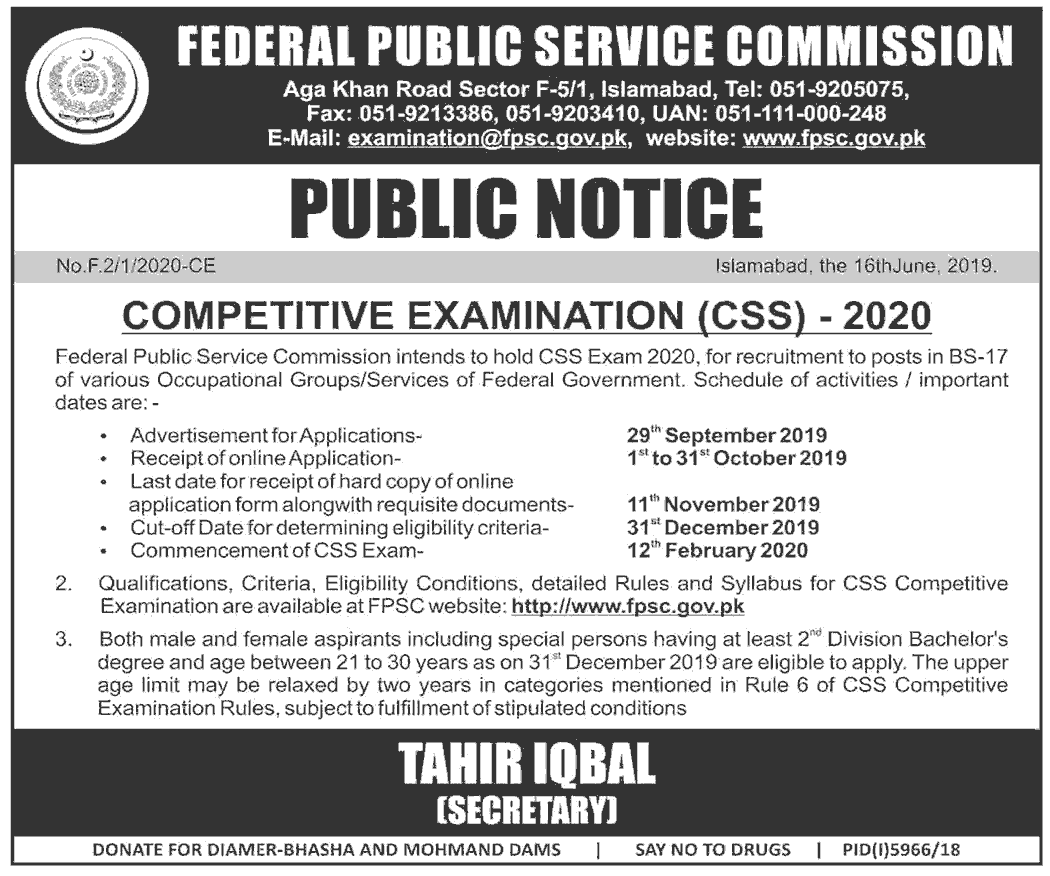 Along with the paid fee challan, students need to send their documents to the FPSC office in Islamabad, after uploading the soft copies on the FPSC website. Once you’ve successfully registered yourself, you are eligible to give the CSS exam.

Why is it so hard to clear the CSS Exam?

The CSS result 2019 proves that indeed, even now, the exam is the toughest nut to crack in the country. Since the perks and privilege that come with serving as a bureaucrat, the criteria is set very hard by the conveners of the exam.

Almost every year, 97% of people who appear for the exam fail miserably. The reason behind this is the tough criteria to clear the CSS exam. Every student needs to pass all 11 papers they appear in, while also collectively scoring an aggregate of 50%.

This means, out of 1200 marks, the students need to score at least 600 and clear all the subjects they appear in.

CSS 2019 and lessons students can learn

The CSS result 2019 is evidence that in order for one to clear this exam and achieve the most elite status in Pakistan, burning the midnight oil is compulsory. Students who have failed the CSS Exam 2019 must work on their mistakes.

As it is famously said, studying for CSS is a full-time job that does not pay. Tips from CSS 2018’s topper Shanza Faiq will help you clear the exam.

For those appearing for the CSS Exam 2020, we wish you the best of luck.