With the Special CSS Exam in November and the usual one to take place in February 2021, aspirants have hit the books again. The Central Superior Services Exam (CSS) is considered the most respected, renowned and toughest exam in the country.

However, the age limit is a factor along with the number of attempts that have irked many aspirants over the years. For most provinces the age limit is set at 30 years old, while students of Balochistan and GB/FATA avail an additional age limit of 2 years, making it 32.

One aspirant of the CSS Exam penned down a letter to the Prime Minister of Pakistan, Imran Khan. In the letter, the student talks about increasing the age requirement for Pakistan’s underprivileged youth. The letter was initially published on SocialChuski.

This is what the CSS Aspirant had to say

Educational inequality is a curse.  Out of its countless damages wrecked is one to the civil superior services examination. It is producing an oppressive environment in competitive exams for the marginalized class as the larger chunk of the population is disadvantaged in academics. When they start CSS preparation, after completing Masters, at the age of 25 or older, they are at level zero in skills required by the CSS exam. Several years are needed to learn the English language (one of the core skills required for CSS), for learning a language takes years of hard work and dedication. It is more unlikely to pass when most of the underprivileged class have to support their family financially, after graduation. Several other problems faced only by the middle class on further eclipses their chances of qualifying CSS within a certain period of time.

The elite or advantaged class, on the other hand, studies from modern institutes from school to graduation. Learning is qualitative in such institutes. The graduates of such institutes are already equipped with English language skills (one of the core skills required for CSS). As a result, the advantaged class exploits the age limit rules set by FPSC and beats the disadvantaged class with no difficulty. This is the story of thousands of such less endowed candidates who do not qualify the civil services in the limited time frame, and they live the rest of their life with a wish that if there were few more years and attempts available they would have been qualified the exam.

Career counseling were not available at the initial level of education to the underprivileged class. Therefore, many students ended up with wrong career choices and confused career goals. It was the state’s responsibility as stated in article 25-A to provide 16 years of quality education to its youth.

United Nation Development Program (UNDP) report indicates: 38% of Pakistan’s population is between the age of 25 and 54, and, 22% are between ages 15 to 24. This shows the cutoff age limit thwart many candidates between the ages of 30-35 to pursue their career in the civil services. 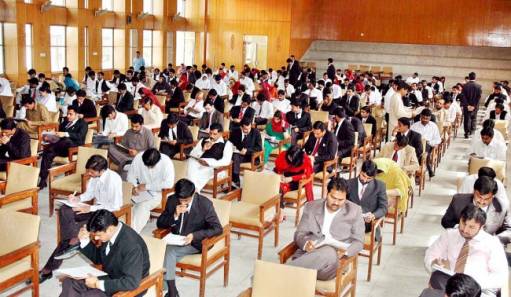 In most of our neighboring countries, developing and even developed countries’ age limit is 35, and the exam attempt limit is more than 6. The general age limit in Nepal, Bhutan, Malaysia is 35 years. However, in India, it is 32 general still lower than of us.  Sri Lankan civil services age has been increased from 30 to 32.

Lifting the age ban will provide equality of opportunity. It will open a window for the more middle class and lower middle class motivated, talented, and matured and exposure driven lot to let them into the civil services. It will strengthen bureaucracy as bureaucrats with underprivileged backgrounds understand the problems of their underprivileged class which is the highest percentage of our population.

Most of the countries, developed and developing, including our immediate neighbors have the general age limit of 35 years, however, in Pakistan, it is 30, despite the fact that Pakistan has a comparatively more poor and unequal education system. Therefore, timely age relaxation by the government may yield some relief to the larger disadvantaged population of our society.

The existing rules of age and attempt limitations for CSS has handicapped the already underprivileged class. We the underprivileged class also dream to go be a part of the privileged bureaucracy.  Shouldn’t we get equal chances to qualify for the exam?  Although we will not be able to join civil services at the middle twenties like privileged class, we will be thankful to join it in the early thirties rather than being barred for entering forever.  We would be grateful if the cutoff age limit for CSS is increased to 35 for the general public and the number of attempts is also increased to six.

Regards
The Underprivileged youth of Pakistan

The views present might seem correct to some, others might argue that becoming a civil servant at a young age is better. However, the fact of the matter remains that the age decided to give the CSS exam remains an issue.

You can also read up on the details of the Special CSS Exam later this year.