COVID-19 Being Used To Harass & Shame Others

Global pandemics occur once in a thousand years or so and it’s just as well because they sure seem to bring out the strange & apparently dark side of the human race. In the current covid 19 crisis we have seen a barrage of information flowing into our phones… some right some wrong and then the downright mean and destructive.

The last kind of information or rather gossip has been in the shape of rounds of hateful messages and forwards on WhatsApp which were circulating naming and shaming those affected, based on concocted stories and maybe cruel intentions. 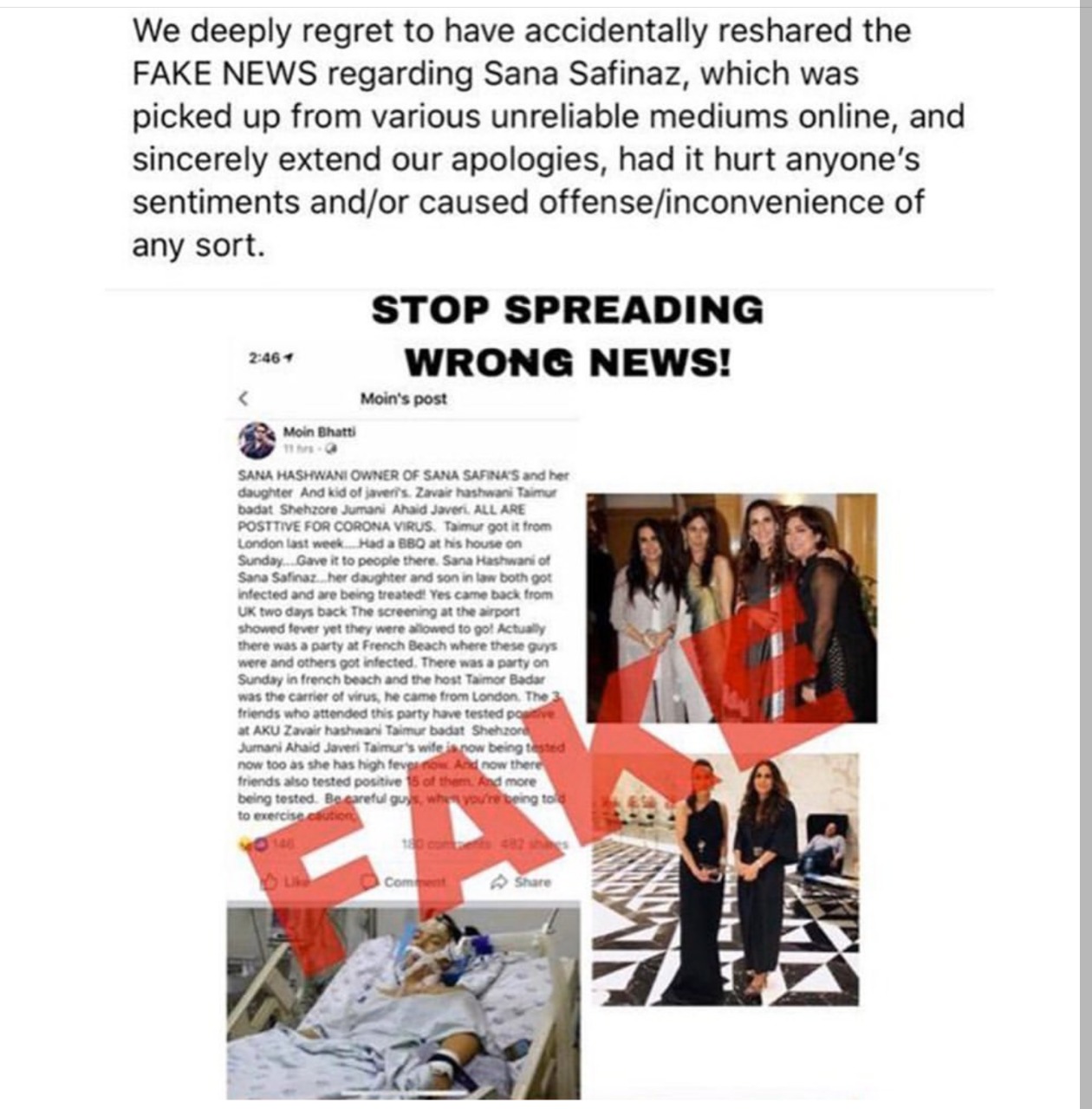 In one incident, people were named who had seemingly been diagnosed positive about how they were all at a party with a hundred people. Turns out, they were not – it was a family barbecue, where one of the named person wasn’t even present.

With an already stressful pandemic at hand, the shaming of those, who didn’t realise they were infected or take the news seriously at first to travel, went viral; from celebrities sharing the information in their Facebook status’ to Twitter by journalists who didn’t research or verify and have now deleted their tweets after some of the affected parties spoke up – and even reached out to them. 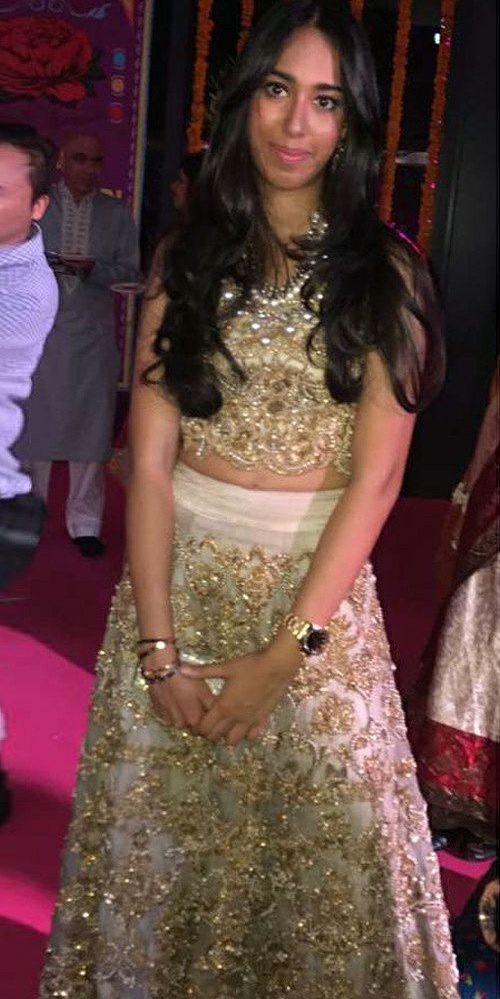 Below is a statement by Zevair Hashwani herself:

“To put an end to all the false rumours. I flew into Karachi on Sunday from London. Came straight home into quarantine as any responsible adult who has travelled abroad should do. Everyone has old and immunity compromised family members.

I tested positive Sunday night the day I arrived and have been in quarantine since the flight. I have not interacted with anyone or attended social gathers as Whatsapp claims I have. (No one should) For those concerned I am showing no symptoms yet and have still tested positive. Today is day 6 of total quarantine for me.

My mother and husband have tested negative and are in quarantine post travel anyway. Please stay indoor stay safe and quarantine yourself regardless it is the only way to beat this global pandemic. Refrain from forwarding false information and WhatsApp’s as it only creates panic and spreads lies.

Every person on social media has a responsibility towards this pandemic. Creating hype and not fact checking before spreading rumours only makes the situation worse for everyone.”

Following this, there were images of an unknown woman in the hospital with the report that it is Zevair’s mother, Sana Hashwani to which Sana Safinaz, the brand put out a statement informing all about the blatant fabrication as shown below. 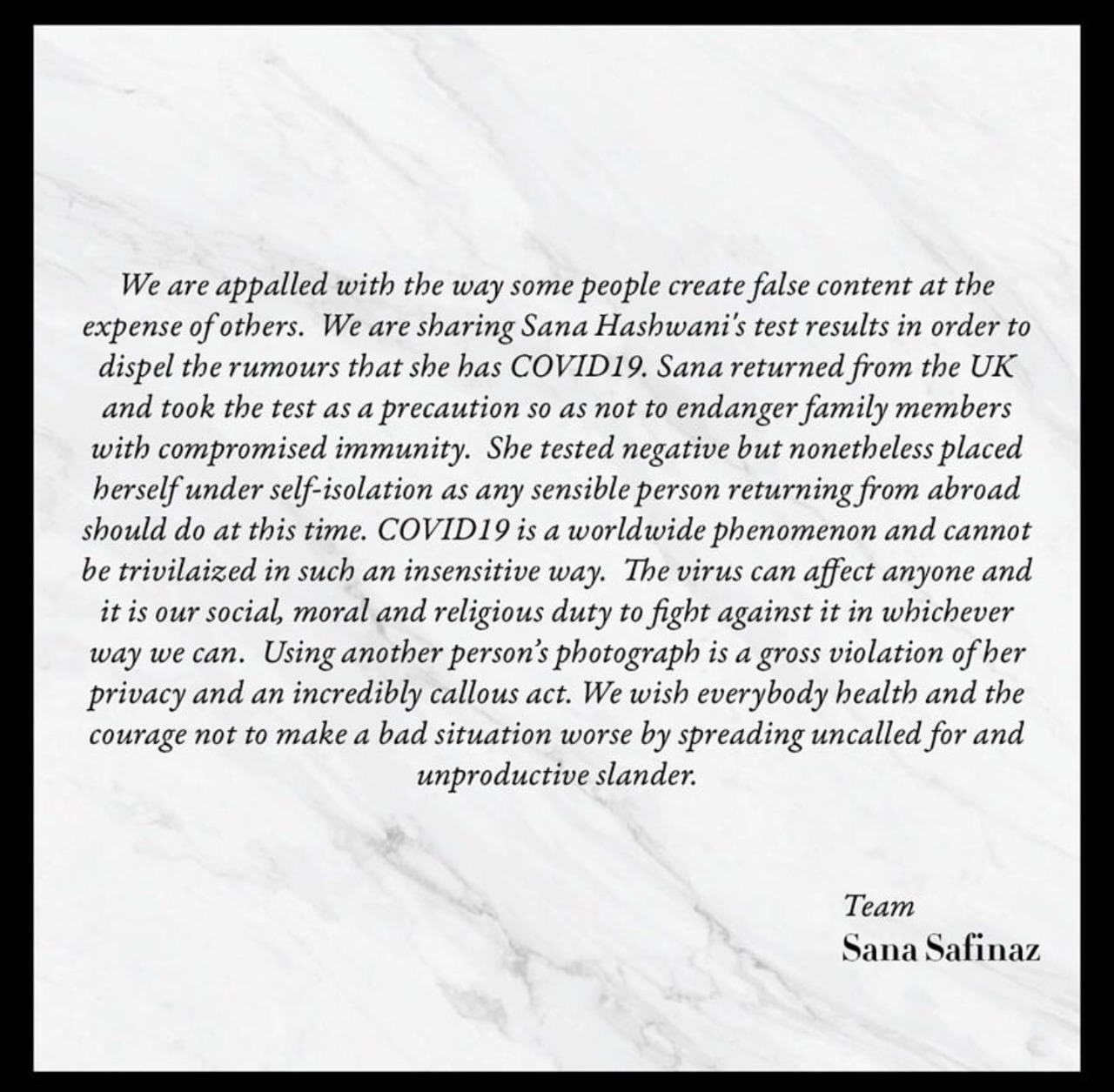 In Lahore, Nazia Gulzar got tested by Chughtai which turned out to be a false positive which authorised the police to come and arrest her, make her sit in an ambulance for 3 hours and wait for the media to take pictures of her before taking her to Mayo. She was tested again there which came out with a negative and they finally released her after 3 days.

Why then have the whole brouhaha of the police, media and public? Why shame someone without knowing what the results are going to be?

Attacking the owner of Lajwanti’s daughter for having contracted Covid 19 was a terrible ordeal for the family. She came forward saying:

“The health department [officials] showed up at our house and we fully cooperated with them and took her first to Ganga Ram (hospital) and then PKLI (Pakistan Kidney and Liver Institute).

“At PKLI, instead of providing treatment to Dania, they sent her back home, saying you seem more educated on coronavirus than us so you would be doing fine taking care of yourself at home,” she explained.

“False rumours spread around social media that she wanted to hide? Why should she have done this? Why wouldn’t she want treatment? I don’t understand exactly why people are so cruel,” Ana said.

Don’t know if social media is a curse or boon. Spreading fake news about someone you don’t even know is just not right. My daughter Dania Ali, who is a fashion student, came back from UK unaware that she had contracted #Coronavirus 1/4

Other than these, the online bullying and harassment saw a whole new peak with Maria B’s videos first circulating with all kinds of hateful information in the start and then in the shape of memes and animations and being dubbed in different voices with someone making fun of her privilege in the wake of her cook allegedly having contracted Covid-19 and the whole haw haye that surrounded this episode… well turns out Maria B’s cook tested negative for the Covid 19 virus and now people are looking around sheepishly at what kind of damage their “all in good fun” posts tweets and humour may have caused this family.

Hahaha people are so creative. pic.twitter.com/rsrETvzP7e

Last but not least, the online bullying didn’t just stop here. The attack on Sharmila Farooqi came next when she made a harmless error while showing us how she would be making her meal – a trend that has taken social media by storm as everyone is showing their culinary skills during the lockdown. We repeat – it was a slip of tongue. It could happen to any of us.

Here’s the reason why everyone from Human Rights Watch, WHO, UNICEF, World Bank, IMF, Arshed Sharif, Fahd Hussayn, to Shahzeb Khanzada are all fans of PPP’s ideas.

Sharmila Farooqi is showing how to cut the tail off a Red Snapper to make a Chicken Fillet:pic.twitter.com/LRGnpcvpyC

Coronavirus can be deadly, it’s frightening as we cannot see it; it has caused deaths in all age groups with and without low immunity worldwide. Researchers are still trying to figure out why and how this has a high fatality rate that we have seen and a vaccine and clinical trials are simultaneously in the works.

But is there a vaccine for bullying & harassment? Is there a cure for playing with people’s privacy, respect and integrity all based on half-truths?

While the world clutches on to all it has, there is an upscale of togetherness in the community for most, but also the bitterness on the other end. What we should be doing, is sticking together, showing good community values – not bullying and harassing each other for laughs or a few likes.

An atmosphere of witch hunts has somehow led the public and Punjab government to blame or highlight the well to do, as they were travellers prior to lockdown. Targeting them and ‘making an example’ out of them is not the way forward. This is bullying.

We are all in this together, also do remember that information these days must be verified from credible news media before you put it out there so kindly stop trying to act like the breaking news cycle and have some empathy in these hard times. It’s because of all this that has been going on that Whatsapp has now reduced its forwarding capability to just one person on news. Imagine this is what they had to do to stop us from going bananas with our phones.