This Girl Provides A Guide On Countering ‘Sexual Harassment’

This article was originally submitted by Rida Khan

As a woman in Pakistan, I am sure we all have experienced sexual harassment – the unfamiliar hand squeezing ours’ as we manoeuvre our way into the busy markets; witnessed adolescent boys nudging each other secretly whispering ‘bachi check karo’ as you pass by them or the creepy uncle who scrutinizes you from head to toe even though you have decided to dress in the most ‘shareef’ way as possible.

Sexual harassment is a daily ordeal of our lives and regrettably, we have accepted it; as part of our patriarchal culture and refuse to speak against it. According to reports, 90% of women experience sexual violence; in public spaces, and yet less than 10% of these cases are reported (Kazi).

In case you haven’t guessed, the ‘flying chappal’ technique has been a scary yet effective technique used by our mothers to ‘fix us’. So the next time you encounter a catcaller in a public space, make sure you have an extra chappal in your handbag so that in no time, it hits the catcaller’s face and you can make your ammi proud. :’)

Public stalkers can not only be creepy but dangerous as well. Hence, the ‘flying chappal’ will not prove to be the best remedy in this situation; however, police authorities will certainly be. If there is anything that scares the shit out of these stalkers, it is the police. If you are nearby any police even if it is a traffic police officer, report the ‘stalker’ to them and you will witness the stalker being vanished in a couple of seconds.

If there is anything that can make a woman’s life miserable, it is a sexist boss. From inquiring about your relationship status to inviting you for dinners, a simple ‘NO’ is just not enough to brush off these matters.

Also, read The Rising Menace Of Sexual Harassment Inside Corporate Workplaces Of Pakistan

This will hopefully knock some sense into your boss’s head for fear of having a legal case pursued against him.

Benevolent sexism is defined as having ideas about gender that are subjectively positive but can be damaging to ensuring gender equality. This can be manifested by the flowery compliments that men shower upon us so often. This can make some of us second thought about the man’s intentions. After all, it is just a compliment.

But this type of sexism endorses the idea that a woman’s beauty is the greatest asset that she can possess. This type of sexism could be a gateway to sexual harassment where women are shamed for not having an ideal body size and not conforming to the ‘beauty standards’ of the society.

Hence, the next time someone calls you ‘pretty’, make sure that you are able to draw the distinction of a compliment or another manifestation of deep-seated misogyny that prioritizes women’s beauty above anything else.

Draw boundaries with your partner 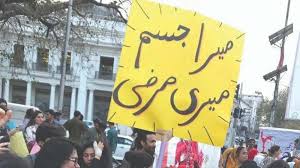 Sexual assault among intimate partners is considered a taboo in this society and many even deny it on the basis of religious grounds. Several religious interpretations are used justifying that it is a wife’s duty to fulfil the sexual needs of her husband and refusing to succumb to them is a ‘sin’. This is the reason why marital rape has not been prosecuted even though marital rape is considered a criminal offence in Pakistan Penal code, in section 375 (Khan).

To prevent sexual misconduct from partners, women need to educate themselves regarding the patriarchal notions surrounding their bodies. They should own their bodies and start saying say ‘NO’ to intimate gestures that they are not ready for without feeling guilty for it because women’s bodies belong to them solely.

Okara Man’s Fourth Wife Publicly Beats Husband For Marrying A 13-Year-Old As Fifth Wife
Careem Pledges To Equip All Of Its Active Captains With ‘Safety Kits’!
To Top