This Girl Shares Her Experience At A Famous Salon In DHA Lahore And Uff, This Is Horrifying!

I visited Cosmo Salon at 148 Y Block D.H.A Phase 3, Lahore on August 26th. It was one of the worst decisions of my life. I was going for their facial package which they had advertised on Facebook.

Everything was going fine until it got to the facial steaming process.

While I was laying on the bed for their steaming session, the steam at first came out fine, but afterwards, the machine malfunctioned and it threw boiling hot water at my face which resulted in the burning of my left cheek and lower neck. The staff at the salon were so unprepared that they didn’t take the burn seriously at all. They instead insisted that it was nothing serious and said it will get better on its own.

When I pleaded to them to take it seriously, only then they decided to put on a “soothing mask” instead of providing basic first aid. The burn was not tended to seriously and was very painful at the time. When I asked them who will take responsibility, they said that it wasn’t our fault. It was the machines fault. 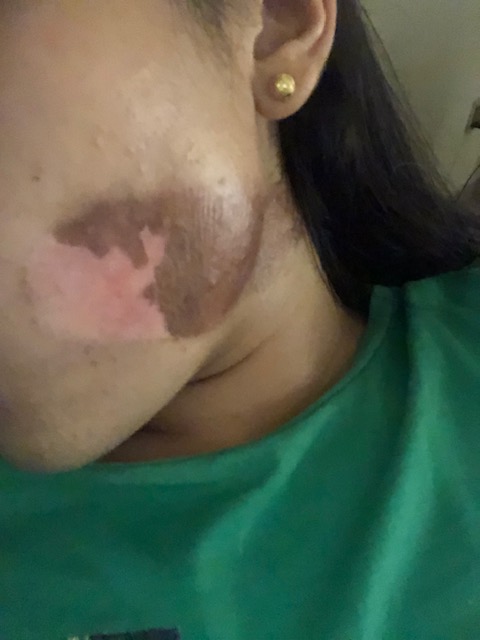 My question to them is, isn’t machine maintenance also their duty?

When I asked to meet the owner, they first stated that the owner is at the other branch and when I said I will take the matter to the police, they then changed their statement and said that the owner is in Faisalabad. When I proceeded to talk to the owner on call, instead of being apologetic, they said that this has never happened before and it can’t be the machine because we keep a lot of stock of these machines.

This statement made absolutely no sense to me. When the owner showed no remorse, I proceeded to take the matter to the police and am currently in the process of obtaining an FIR. The reason why I wanted to bring the matter to you is that this parlour needs to be taught a lesson.

I want to warn everyone of the dangers at this salon so they don’t have a similar experience like mine. I can only thank Allah that my eyes were safe, but if they too had gotten damaged then what would have the salon’s owner done?

Tarek Fatah Tried To Criticize PTI By Sharing A Really Old Video And Obviously Indians Joined Him!
This Girl Reveals The Harsh Reality Of Jobs For The Younger Generation In Pakistan!
To Top