'We Have Lost Engines. Mayday, Mayday' Were Pilot's Last Words Before Crash 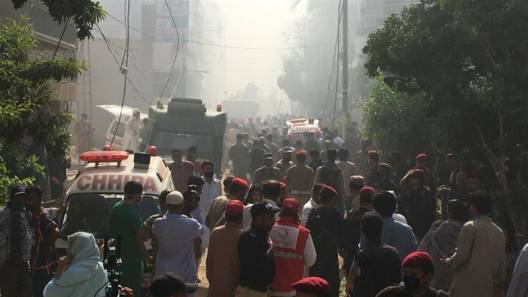 The pilot thrice said “mayday, mayday, mayday”! Mayday is the call of distress. Here is the reported conversation of PK8303 between the control room and pilot.

Control: “appear to be turning left.”

Pilot: “We are proceeding direct, we have lost engine.”

Control: “runway available to land at 25.”

PIA spokesperson Abdul Sattar confirmed the crash. He said that the flight was carrying around 90 passengers, which was flying from Lahore to Karachi.

PIA Chief Executive Officer Air Marshal Arshad Malik, who has left for Karachi, said the pilot told the control room that there was a technical issue and he decided to go around rather than land even though two runways were ready for landing.

PIA CEO Air Vice Marshal Arshad Malik says that the pilot of PK8303 had told ATC that the plane was experiencing “technical difficulties” – both runways were available for landing but the pilot did a go-around – says probe will be conducted to find out what exactly happened pic.twitter.com/cd94aVuulP

Advisor to CM Sindh said, “Chief Minister Sindh Murad Ali Shah has directed IGP and Commissioner Karachi to ensure all possible relief operations at the crash site. May Allah help us all in such difficult times.”

Hopefully, there are many survivors of the crash incident. The last conversation between the control and the pilot clearly portrays a dismal picture. The engine of the plane was not working.

Here’s A Happiness Mantra For Parents That Are Always Worried
Do You Know How Much Ahmed Shah Earns From A Single Episode?
To Top