Just today on 29th June 2020, a group of terrorists tried to attack Pakistan stock exchange but badly failed as Sindh Rangers and police tackled each one of them down to the floor. And we can’t be more proud of them. The thought of how the entire terrorist attack could have been a horrifying massacre is overwhelming and unimaginable.

The brave constables and rangers of Sindh

Terrorism in Karachi isn’t new. However, thanks to the hardworking, brave, and strong constables who risked their lives for the sake of protecting many more. Constable Khalil and Constable Muhammad Rafiq were the two brave heroes who neutralized this group of violent terrorists and killed every one of them. 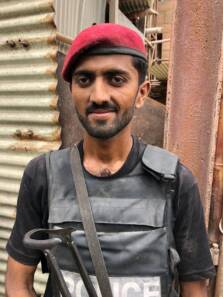 The sacrifice and bravery of these soldiers are beyond applaudable and we should appraise them for their determination courage. Constable Khalil and Muhammad Rafiq worked quite strategically to fight off each of the soldiers and we are beyond proud of them. It was their quick thinking that saved us all from this traumatizing experience that was going to take place at the Pakistan Stock Exchange.

Therefore, after terminating each terrorist, Constable Khalil told the media what actually happened.

Well done 👍 Brave soldier, #Pakistan proud of you.
You did a great job.
Hats off to you.
pic.twitter.com/xtAfhb8Ycr

He told us how he saw them attacking and used his quick thinking to counter-attack them. It is a truly admirable effort and we are proud of how he took care of the matter. Most importantly, we want to thank the Karachi police and authorities who risked their own lives to save ours.

The minute the news of the attack on Pakistan Stock Exchange went viral, the netizens and Twitterati have been all appreciation and praises. It is truly a heroic moment to wonder the bravery of our forces who keep us safe and protected from evil encounters such as this. Which suspiciously makes us think about one thing. Why is the Indian Twitterati so affected by this terrorist attack?

Hats off to them . Sir with due respect isn't a bit risky to reveal their face because there are symphatiser of Terrorist as well.

The minute the post went viral, all Pakistani’s have come together as one united nation to applaud and praise. But Indians on Twitterati seem to have somehow magically known of this attack or were the first ones to take offense of the terrorist attack. hmmm… now isn’t that weird?

We are proud of you

Moreover, all brave heroes that took part in this sudden operation are being rewarded Rs. 2 million by the IGP Sindh.

Wow! Just the thought of facing the risk of losing one’s life and still fighting bravely for our country is inspiring. We are more than proud of these soldiers and we aim to applaud them for their courage. We also stand by them and will always be there to defend and protect our country Pakistan. May you both live long and prosper!

Man Tragically Mourns The Lives Of His Wife And Children In PK-8303 Plane Crash
How Terrorists Were Killed In Just 8 Minutes! Police Constable Rafiq Reveals Details
To Top