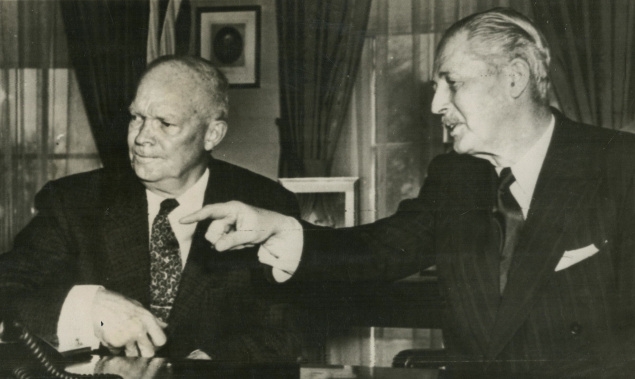 In 1949, the CIA installed a pro-American colonel, Adib Shishakli, as the Syrian leader. He won direct American military assistance along with covert financial aid. The CIA station chief in Damascus, Miles Copeland, called the colonel “a likeable rogue” who “had not, to my certain knowledge, ever bowed down to a graven image. He had, however, committed sacrilege, blasphemy, murder, adultery and theft.” He lasted four years before he was overthrown by Ba’ath Party and communist politicians and military officers.

In March 1955, Allen Dulles predicted that the country was “ripe for a military coup d’etat” supported by the agency. In April 1956, the CIA’s Kim Roosevelt and his British Secret Intelligence Service (SIS) counterpart Sir George Young tried to mobilize right-wing Syrian army officers; the CIA delivered half a million Syrian pounds to the leaders of the plot. But the Suez fiasco poisoned the political climate in the Middle East, pushed Syria closer to the Soviets, and forced the Americans and the British to postpone their plan at the end of October 1956.

In the spring and summer of April 1957,they revived it. A document discovered in 2003 among the private papers of Duncan Sandys, Prime Minister Harold Macmillan’s defense secretary, spells out their effort in detail.

Syria had to be “made to appear as the sponsor of plots, sabotage and violence directed against neighbouring governments,” it said. CIA and SIS would manufacture “national conspiracies and various strong-arm activities” in Iraq, Lebanon, and Jordan, and blame them on Syria. They would create paramilitary factions and spark revolts among the Muslim Brotherhood in Damascus. The creation of the appearance of instability would destabilize the government; border clashes manufactured by American and British intelligence would serve as a pretext for the pro- Western armies of Iraq and Jordan to invade. The CIA and SIS envisioned that any new regime they installed would likely “rely first upon repressive measures and arbitrary exercise of power” to survive.

The CIA sent Rocky Stone, who had cut his teeth in the Iran operation, to serve as the new chief of station in Damascus. Accredited as a diplomat, a second secretary at the American embassy, he used promises of millions of dollars and unlimited political power to befriend officers in the Syrian army. He represented his recruits in reports to headquarters as a crack corps for an American-backed coup.

Abdul Hamid Serraj saw through Stone in a matter of weeks. The Syrians set up a sting. “The officers with whom Stone was deal- ing took his money and then went on television and announced that they had received this money from the ‘corrupt and sinister Americans’ in an attempt to overthrow the legitimate government of Syria,” said Curtis F. Jones, a State Department officer sent to clean up the mess Stone left behind. Serraj’s forces surrounded the American embassy in Damascus, seized Stone, and interrogated him roughly. He told them everything he knew. The Syrians identified him publicly as an American spy posing as a diplomat, a veteran of the CIA’s coup in Iran, and a conspirator with Syrian army officers and politicians to overthrow the government in exchange for millions of dollars in American aid.

The revelation of this “particularly clumsy CIA plot,” in the words of the U.S. ambassador to Syria, Charles Yost, had consequences that reverberate today. The Syrian government formally declared Rocky Stone persona non grata. That was the first time that an American diplomat of any stripeâ€”be he a spy working undercover or a bona fide State Department officerâ€”had been expelled from an Arab nation. In turn, the United States expelled the Syrian ambassador to Washington, the first expulsion of any foreign diplomat from Washington since World War I. The United States denounced Syria’s “fabrications” and “slanders.” Stone’s Syrian co-conspirators, including the former president, Adib Shishakli, were sentenced to death. A purge of every military officer who had ever been associated with the American embassy followed.

Read Also: A Brief History Of The Extensive And Deadly War In Syria Which Killed 500,000 Humans

Have you ever seen this video??? This is the house of Prophet Muhammad (pbuh)! Subhanallah!
Pakistan News: Guards of Abdul Qadir Gilani Murder Tahir Malik in public! VIP culture kills.
To Top