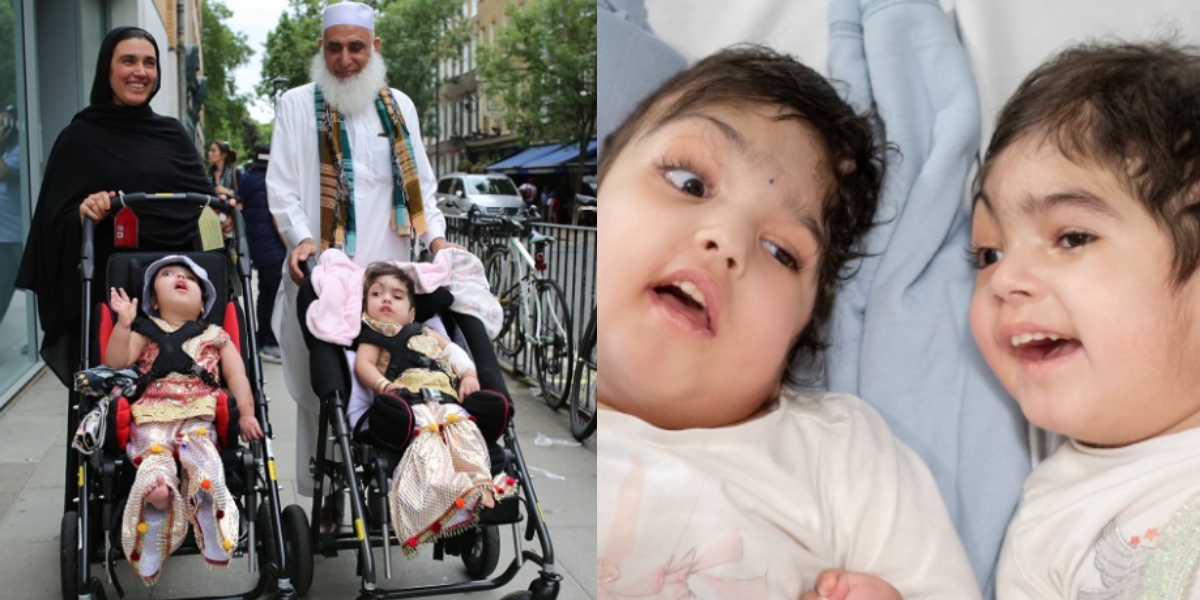 It took the doctors three consecutive surgeries at Great Ormond Street Hospital, one of the world’s largest hospitals for children in London, to safely separate the heads of the sisters. Safa and Marwa are craniopagus twins. They shared a skull and blood vessels which left their brains distorted.

The grandfather of Safa and Marwa, Muhammad Saadat Hussain, gave an interview to Independent Urdu. He revealed how he received the funds for the treatment of his granddaughters in London.

Hussain said, “When my granddaughters Safa and Marwa, who are now three years and nine months old, were born, their heads were intertwined. The girls’ father, Zahidullah, had died before they were born.”

According to Hussain, when the news of the birth of his granddaughters spread in the media, the then prime minister of Pakistan Nawaz Sharif took notice. Nawaz issued orders to treat the girls at PIMS Hospital Islamabad at government expense.

The initial treatment took place at PIMS Hospital in Islamabad

Hussain said the twin sisters were receiving treatment at PIMS for three months. However, the doctors confirmed that they were required to be taken to London for further treatment. But when the cost was estimated, it was in millions of rupees for which the central government was not ready.

Hussain said it was a very painful day for them when the family found out that it is not possible to treat girls in Pakistan. The girls’ grandfather said they also asked for help from the local administration as well as the provincial government for their treatment.

Funding for Safa and Marwa’s surgery

The family asked the then K-P chief minister and PTI leader Pervez Khattak for financial help. Later, Khattak came home and told them that the government had arranged visas and tickets for London. Hussain said they initially left Pakistan for 145 days. However, they later stayed there for two years and a month due to the complicated nature of the surgery.

According to Hussain, they left Pakistan on August 10, 2018. The first operation took place in October 2018 and the last successful operation of the girls took place in February 2019.

The surgery was funded by a generous Pakistani businessman by the name of Murtaza Lakhani. Lakhani’s reasons for helping out was that he wanted to help the citizens of his country.

The surgery was led by the team of Neurosurgeon Noor-ul-Owase Jeelani and craniofacial surgeon Professor David Dunaway. It took four complicated procedures over four months to separate them. The operations added up to more than 50 hours of surgery time and involved 100 members of GOSH staff.

The complex surgery had to be broken down into small procedures to manage it safely. The team first mapped their anatomy in virtual reality and practiced on 3D models to prepare for the surgery.

The grandfather of Safa and Marwa said the girls were still weak and could not walk. He added they were also trying to be vigilant for the health of the twins due to the COVID-19 pandemic. They were undergoing physiotherapy. The doctors in London instructed them to contact the girls whenever they had a problem.