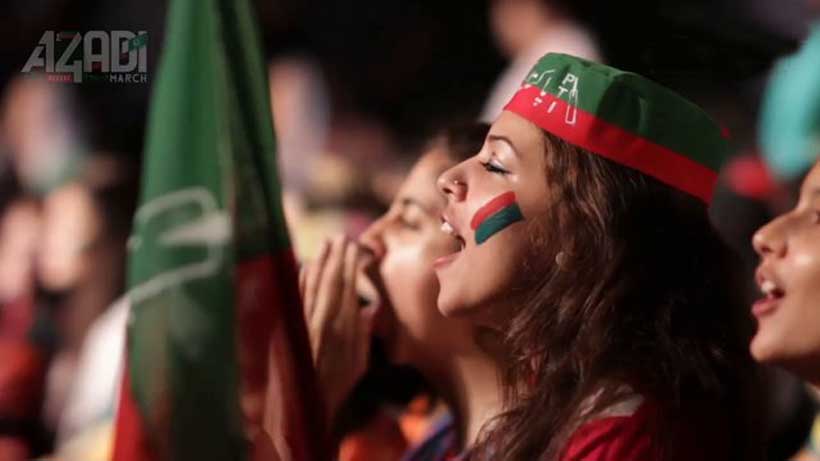 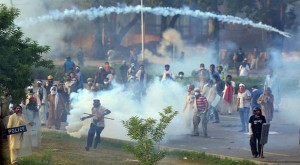 Islamabad massacre goes on and the police continue to respond with force.

The protest took a violent turn after about eighteen days of a peaceful sit-in, when the crowd marched on towards the Prime Minister House. As reported, 25000 people are accused of using tools and a crane to damage the property. Police resorted to using tear gas to scare the protesters away but that did not do much in that regard, however more than 400 people got injured and eight lives have been lost.

Till now, the public serving departments along with the establishment have taking different turns while the crowd refuses to disperse. The political polarization has taken its toll and the two ends of the political conflict are not ready to negotiate. Â The two leaders of the protest, Tahir â€“ ul- Qadri and Imran Khan, are not ready to go back on their demands and their followers are not willing to give up till the revolutions sets its course. However, the common man remains to be the victim and the fighter at Dastoor Avenue.

Pakistanâ€™s common man sat on the roads to protest for days and when the leaders told him to march on, he did. He was allowed to proceed by the police till they unleashed allegedly expired tear gas, leaving many injured. The deaths started off with a lady losing her life who had no suicide jacket attached to her, neither was she armed with ammunition to attack the police. The night got darker when children were abandoned in the chaos as the tear gas left them breathless. Ambulances rushed the injured to PIMS but the chaos could not be left behind. The real bullets still pierced in the bodies were bandaged to dress the severely injured as minor wounds in front of the media. Adding to the chaos, Police gathered outside the hospitals where they were accused of arresting the injured ones. Later, Doctors admitted that the bodies were actually hidden and the injured were discharged forcefully so that the Hospital Administration could deny the aftermath of shelling to the media. This is what the protesters, some tv channels and most of the infuriated nation had to say.

On the other hand, Government has been preaching the flip-side. Their side the story has plastic bullets and no torture on women and children involved. The deaths and injuries were alleged to be fake as the Defense Minister has claimed that the protestors marched on to destroy the Prime Minister House with a crane and that is when Police had to resort to shelling. The use of; teargas and â€˜rubber bulletsâ€™ was just to scare the mob away. Moreover, Government also denied the deaths as they said Police was not ordered to kill anyone. This side of the story gets alarming when Government representatives label the crowd as terrorists with no measures taken to ease the tension.

The clashes between the Police and PTI/PAT followers seem to be low on Governmentâ€™s priority list and non â€“ negotiable approach of both the political parties is contributing to the deadlock. Pakistan, as a nation is being manipulated by the political heads and neglected by the Government. The common man was suffering back at his home and he still suffers at the Azadi Square, either being shelled or arrested. Considering the two extremely different sides of the story, the common man gets lost on his way to freedom, while Army takes the back seat.

Pakistan Against The Government: The Latest News Updates
SSP Asmat Ullah Junejo No Longer Dabang! Only Banged.
To Top