However, Dr. Rani was arrested from Lahore on charges of illegal land allotment to a private person.

Reportedly, on Tuesday night, the ACE team raided Chamba house in Lahore and arrested her. She was charged with illegally transferring 31 kanal and 12 marla land to some persons including Mirza Mubarak Beg and Mirza Azhar Iqbal and others in 2019 as Gujrat ADCR. 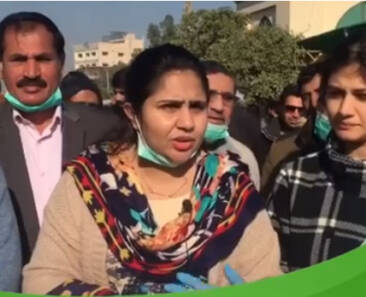 Also, according to anti-corruption officials, she was allegedly involved in the corruption of millions of rupees with the help of land mafia. After receiving several complaints against Dr. Rani, ACE took action against her. She misused her authority and allotted land in the name of her family members (mother, father, brother, and other relatives) during her tenure. Also, she is building a big mansion for herself in Lahore.

Rani was posted as Gujrat ADCR weeks ahead of the July 2018 general elections. She continued to serve on the post for two years before she was transferred from Gujrat by the Punjab government after registration of a graft case against her in the sand excavation case earlier this year.

Moreover, Gujranwala former commissioner Zahid Akhtar Zaman had once sent a written report to the provincial government about the alleged corruption of Dr. Rani. But, she was not removed due to the support of some influential people.

However, Prime Minister Imran Khan has now ordered strict action against her.

Sindh has always been in the limelight when it comes to illegal works of engineering. Whether it is the drug mafia or the land mafia, this province has been ruined by many. But, the province of Punjab too is involved in many criminal activities too including rape cases, child abuse, land grabbing, and murder. Furthermore, the higher authorities in Punjab is also found to be involved in many criminal activities.