Coke Studio is returning as Season 12 has officially been announced and music fans all over Pakistan just cannot seem to hide their excitement. Not only the Coke Studio fans but almost all of Pakistan’s had been waiting for the latest season because of the constant hype created around it. Now, a trailer or the first video of the season has been released.

Here is the interesting promotional video that Coke Studio has posted on its Youtube page. People are already complimenting Rohail Hyatt in the comments while displaying their excitement for the artist lineup:


The other videos uploaded by Coke Studio show the members of the Coke Studio team Zain and Kami roaming around the set filming a behind-the-scenes. People have been raving over the brilliant set that will be used to create heart-warming music and melodies. Once again, just by looking at this single trailer, we can tell how the producers of this show are making sure every detail captures the essence of the season well.

This is also the reason why Coke Studio always returns better than ever and possesses great popularity. The people that regulate the show are putting in their utmost efforts to make it a hit. It remains as one of the best platforms for Pakistani musicians to display their music.

Which Artists Will Be Joining This Season?

Some of the old members of the House Band will not be joining this season. It appears that there might have been some change of plans when it came to discussing their appearance with Hyatt. However, it looks like Hyatt is subjecting most of his time to the success of this season. Hopefully enough, Pakistan doesn’t get to witness some disappointing songs as it did with the previous season. But it is important to sit tight as one doesn’t know what kind of music and artists this season promises. 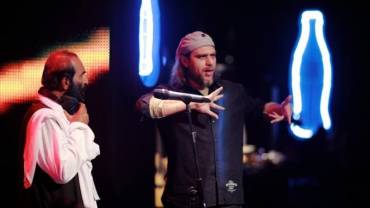 Some of the singers that are expected to join Coke Studio 12 include Shahab Hussain, Hadiqa Kyani, Umair Jaswal, Aima Baig, Atif Aslam, Zoe Viccaji, Sanam Marvi, Umair Jaswal, Ali Sethi, Shuja Haider, Rachel Viccaji, Abrar-ul-Haq, and many other famous and talented singers. Many of these musicians have participated in the previous season and have gained considerable attention by the nation for their impressive skills. Hence, people are curious to see what kind of music will they get to listen to as this new season draws near! Moreover, the release date isn’t too far away as Coke Studio 12 will reportedly be launching this month.

Here is what people have to say about the video on Twitter:

Even little kids are excited about the new season! And honestly who can blame them?

Coke studio season 12 promo is here. So many of my friends including my nephew (13 years old) would have been so excited. They won’t know. Till when? We don’t know. Small joys, big siege. #Kashmir https://t.co/TGFW5djdac

Coke Studio definitely is a great source of nourishment for the soul.

Some seem to be looking at a rather different angle rather than appreciating the trailer.

Coke studio season 12 doesn’t have Momina and Asim. And let me tell you that this is the best news.#cokestudio12 pic.twitter.com/OmPcDwdDuO

What do you think of the situation? Do you think that Coke Studio season 12 would be able to live up to its hype? If it cannot, what might be the reason? Share your thoughts using the links below.

Inam, A Student Of Comsats University, Islamabad Dies Because Of Management’s Gross Negligence!
Zainab Abbas Wishes Shadab Birthday And Wait Is There Something We Should Know?
To Top