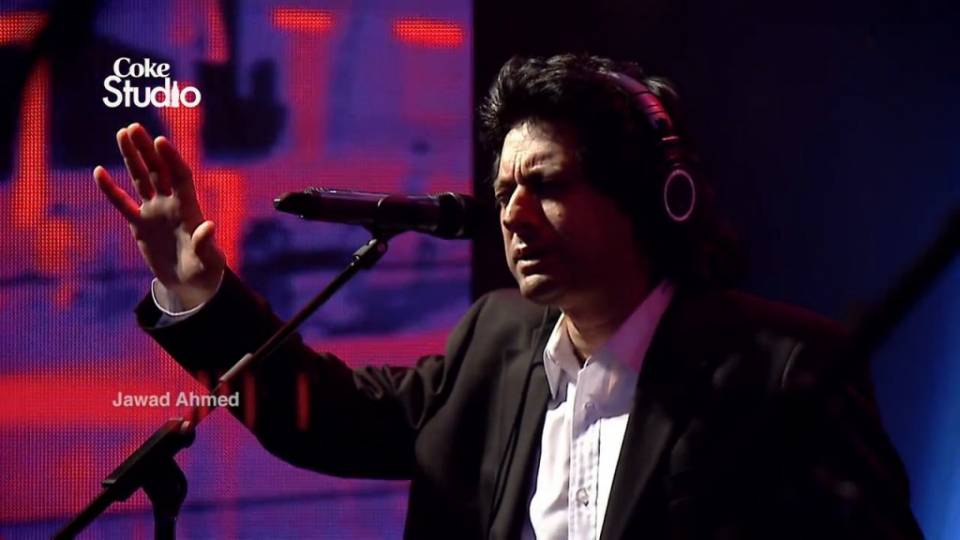 We haven’t seen Abbas Ali Khan for quite a long time ever since he came up with his funky and gaudy debut song many years ago. Abbas Ali Khan, recently, switched to ‘sufi’ melodies but that didn’t earn him much respect and appreciation as compared to the music he introduced initially. His song ‘Sun Re’ became a huge hit amongst Pakistani music lovers.

However, Abbas has returned with the bash in the fifth episode of Coke Studio and it has changed perception of Abbas completely amongst the audience. Abbas has sung ‘Mujhay Baar Baar’ as beautifully as its lyrics is. Mujhay Baar Baar is a melody from his upcoming album and we were totally mesmerized by his performance in the Coke Studio.

Bilal Maqsood described this melody as a poignant tune. They thought it as a very intense and touchy tune in the beginning but then they realized it’s quite heartening and uplifting song that may touch Coke Studio’s music philosophy.

Moreover, they were heard saying that Abbas was present throughout all the recording sessions of Coke Studio as he works on graphics and maintains the screen work on the sets. So, Abbas knew the way the Strings work and it helped him to gel up with them to produce the brilliant piece.

The music given by strings in this song of Coke Studio is very touchy and will move you from the beginning. It is only when Abbas begins singling an alaap in Sufi Raag Darbari, his strong vocals echoes and the sound produced by his vocals is none less than the melodious tune of an instrument. It was a wonderful beginning to episode of Coke Studio.

Just to blance off with Abbas Ali Khan’s Mujhay Baar Baar, Jimmy Khan’s ‘Pehla Pyaar’ in Coke Studio is more energizing, youthful, and elevating. The melodious voice of Jimmy Khan was complemented with brilliant tune of flute produced by Sajid.

The amazing thing about this song of Coke Studio is that the flute doesn’t counter or hijack the highs of the song and rather, keeps up with it as if both the vocals and flute tune are one unit producing the melody.

Jimmy Khan had sung this song as part of his album before and it was heard on various radio channels and internet forums. But, the audience that missed his piece got chance to hear this talented guy singing a wonderful tune on grand forum of Coke Studio. Jimmy has done complete justice to the song with other musicians in the Coke Studio. Strings have to be lauded for putting up the energy and presenting it in the way Coke Studio’s audience likes it.

Mitti da Pehlwan was another beautiful melody of this Coke Studio episode. It was the first appearance of Jawad Ahmad in the Coke Studio sessions. The producers have done well to mould Jawad Ahmad’s music and style for the Coke Studio by ensuring his originality of music in the song. Bilal Maqsood, right before the song, told that there is no bhangra in the song.

But, Jawad Ahmad came up with his baby bhangra-dhamaal song, so they were not sure that they could do it. But, then Strings took it as a challenge and decide to work their way through it in Coke studio and turn it into brilliant tune in this Coke Studio episode.

One might have imagined it hard for anyone to adapt to Jawad’s style of music but strings in Coke Studio, known for their professionalism, Strings shaped the rawness of Jawad Ahmed’s voice and molded it in different style of music with brilliance.

Jawad Ahmed put tempo of this Coke Studio song as high as 128 but, Strings brought it down to 116 and convinced the singer to sing a slow-paced song moving with the waves rather than a dhamaal as Jawad is known for. The result was amazingly fun-filled Coke Studio song which depicted the originality of Jawad’s voice and had tinge of contemporary music with musical acumen of Strings making it one of the best songs of Coke Studio sessions.

“Tufail Niazi originally came out with this song,” Bilal maqsood said before the shoot. “His sons are the rightful heirs to it. If anything, this song should register with the audience through them.”

Khairyaan de Naal’s legacy was freshened by Strings in Coke Studio when they decide to feature Niazi brothers in it. The beginning of the song is slow and takes you with it as it moves and Niazi brothers’ poignant and heart-touchy voice completes the melody in every sense.

The music meets the brilliant voice of Niazi borthers as we move on with the tune and when the brothers sing the main chorus of the song. Not to forget, the impact the flute had on over all tune and it just collaborates with the lyrics on its own having a soulful impact on the listeners.

The Coke Studio version of Khairyaan de Naal embodies emotions, hearty, soulful impact along with the utter simplicity that makes it more prominent to other versions sung before. We can say, this is one is the purest version of the song.

The rawness with the melody exists in the song as it permeates its way through the audience’s auditory senses and moves you gently. One could not have asked or better ending to Sufi filled episode of Coke Studio which will be on Moharram break for few weeks.