Rehman Malik Lies So Much That Even If He’s Eating An Apple, He Will Say It’s A Banana. – Zulfiqar Mirza

It took birth not so long ago. We all are well familiar with this legendary quote by Zulfiqar Mirza that took a toll on people back in time. 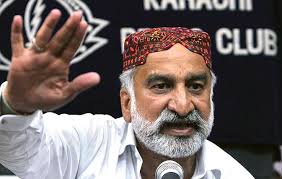 Yes guys, remember classic Pakistani politics? Our lovely politicians calling out at each other using names/phrases that were so unbelievable. Not the first time a politician went full-throttle with ridiculous comments on local media. If you remember former CM of Balochistan, he went on live media like, “Degree Degree Hoti Hai Chahay Asli Ho Ya Jaali.”

While I don’t really remember the background of Zulfiqar Mirza using such a comment for Rehman Malik, I do remember that he left PPP and thereafter, revelations including this classic quote came to life.

Fasi Zaka, Pakistani political commentator/columnist pointed out on Twitter that the global media outlet, CNN has made a whole advertisement based on the idea of what Zulfiqar Mirza uttered about Rehman Malik. Check it out:

Zulfiqar Mirza once said Rehman Malik lies so much that even if he eats an apple he will say its a banana.#cnn just made an ad about it pic.twitter.com/1Il7B2N2uh

but only when if you talk him on phone

I swear same thing came to my mind when i saw that ?

YES. SOMEBODY DO THE HONORS

It's a fruit .Who cares about it being an apple or a banana . Just grab and finish it – From corruption diaries, abstract rule #9211 pg420

Pervaiz Rashid, Maruim Nawaz and Maruim Auragnze, and Ahsan Iqbal will prove that its a banana

Not every day you come across such stories. Not every day, guys! Well, we meant in a light, humorous way without offending anyone. No matter whose side you are on, I bet you are going to have a good laugh over it.

5 Types of Pakistani Conversations that are legit hilarious and petrifying at the same Time!
#JoMeinChahoon: If These 10 Reasons Don’t Motivate You to Follow Your Dreams, Nothing Will
To Top