On Monday, the Supreme Court showed disappointment over the administration of Special Assistant to the Prime Minister on Health Dr. Zafar Mirza in dealing with the COVID-19 outbreak and ordered the federal government to expel him from his job.

A five-judge bench of the apex court, chaired by Chief Justice Gulzar Ahmed the 27th CJ of Pakistan, was listening to a case on the government’s actions to control the spread of the deadly pandemic in Pakistan. 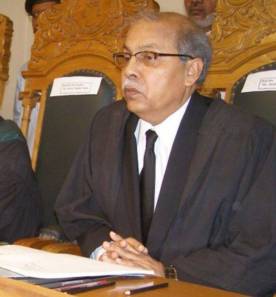 The debate and reasons for removing Dr. Zafar Mirza

Answering to CJ’s remarks about suspending Mirza, the attorney general responded: “Do not change him mid-flight.” He urged that expelling him during this time would be destructive.

Chief Justice said, “The government has only provided census to the court.”

The attorney general responded, “No country in the world was prepared to fight such a disease.”

Justice Gulzar Ahmed asked when the government would legislate on the calamity. “Rest of the countries have passed a law to deal with the emergency.”

“The state has other jobs rather than just holding rallies,” Justice Gulzar Ahmed said.

“The prime minister’s cabinet has become ineffective. He seems distant from the rest. All the provinces are doing whatever they desire,” The CJ added.

Earlier, DR. Zafar Mirza was accused of corruption, which he denied. Besides, Chief Justice took SUO-MOTO action last week on the coronavirus crises. The CJ got to know about the Balochistan government buying kits on higher prices from vendors in Lahore and Karachi. That may be the reason for asking the federal government to remove Special Assistant to the Prime Minister on Health Dr. Zafar Mirza.

Following the orders of the top court, certain reactions of the general public and prominent ones have been recorded on social media platforms.

This is what the author Mir Mohammad Ali says

Our #SupremeCourt is playing politics ?

What authority does The SC have over removing Dr @zfrmrza ? Isn’t that an Executive Branch decision ?

What a time to play games. Shameful.

Ridiculous decision of #SupremeCourt ordered federal to remove Dr. Zafar Mirza in the middle of worst health emergency situation. No sou-motu where it was needed but unnecessary takes. Being a legal person, I must say, petty attempt of attention-seeking by our honourable CJP.

She says it is not a ‘wise decision’

Not a wise decision to remove Zafar Mirza in the middle of a pandemic. These petty fights can wait but the country is in the middle of a major health crisis and it is simply not feasible to bring someone else in at this point. #SupremeCourt

Lawyer Taimur Malik says he ‘fails to understand’ the decision

As a lawyer I fail to understand how the Surpeme Court can seek removal of Dr Zafar Mirza from his position in this manner. Will the Court now be the judge of who is competent or not & seek dismissal if a Minister or Govt. is not meeting the Court’s expectations? What next?

In a nutshell, people on social media seem to be against the decision of the apex court. Many are saying, at this juncture removing the Special Assistant to the Prime Minister on Health Dr. Zafar Mirza is not wise. However, the government has not yet removed Dr. Zafar Mirza from his post.