VIP Culture in Pakistan is becoming a problematic issue for citizens. First, VIP protocols advertently cause long-haul traffic jams, delays and disruption which any citizen of Karachi can absolutely relate to. A heap of protests have already been laid down by citizens who have suffered from the epidemic of VIP culture.

Today we came across a story that further proves how a citizen can seriously face problems due to VIP culture. A security abused and beat up a citizen after he, in his car, got in the middle of his convey by mistake. Watch the whole video of the actual incident taken place on Karachi’s Shahra-e-Faisal, recorded by the citizen himself:

USE HEADPHONES: Citizen beaten up by security guards because he, by mistake got in middle of his convey. What's your take on this? #VipProtocol #Karachi #TimesOfKarachi

Posted by The Times of Karachi on Monday, October 2, 2017

Shortly after the video started circulating all over the social media, people started expressing their immense anger and resentment over it. Basically, how dare a security guard felt obliged to barged at a citizen, disrespect him by violence and abuse?

The story developed further. IG Sindh, AD Khwaja took a strict action against the officer on scout duty for the incident based on the viral video. IG Sindh appointed SP Security Malik Ahsan to investigate the case and compile a comprehensive report at his earliest. 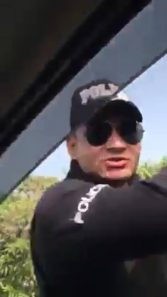 via The Times of Karachi

A recent update shows that the squad commander and the police officer has been dismissed. This proves that readily action was taken by the law-enforcement agency to validate the case and bring an accountable result out of it. This incident stands as a strong example of how the poor of social media to voice out an issue in our society can help.

Citizens need to be treated with kindness and respect and no amount of abuse and violence by anyone should be tolerated.

These Hindus Believe Their Ancestors Fought Alongside Imam Hussain (RA) in Karbala
Mahira Khan is Back on Social Media and Honestly, Everybody is Loving her Attitude!
To Top