Movies are history, watching online series is the new cool. Ever since the advent of platforms such as Netflix, Amazon Prime, Hulu, and Zee 5, the influx of online shows for streaming has become the new norm. While India has been bombarding the online market, it looks like a Pakistani director is hell-bent on giving them a run for their money.

Asim Abbasi, the man who directed ‘Cake’, which is available on Netflix, has now come out with an online series called ‘Churails’. The series is being released on the renowned Indian platform Zee 5.

Bringing some extremely song characters, Churails is a story about women who take their relationships and those of others, in their own hands. Showcasing a new storyline, something that Pakistan has not produced before, Churails is one of a kind show. 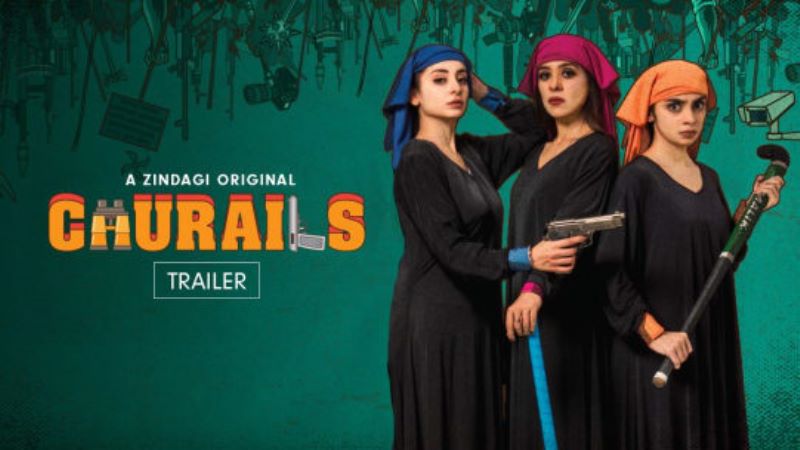 A team comprising of a wedding planner, a boxer, a lawyer, and an ex-prisoner, the women run a spy company on cheating husbands. Featuring Sarwat Gillani, Mehar Bano, Yasra Rizvi, and Nimra Bucha, the show’s trailer has stirred up a controversy on the internet.

While some see this ‘progressive’ new show as one in the right direction, others have been calling it out for being vulgar and misleading. Since the Pakistani censor board cannot intervene, the show will eventually be released and available on Zee 5.

Watch the trailer of Churails

Asim Abbasi spoke about the series’ launch on an Indian platform, saying: “Zindagi’s commitment to truly original content that has a voice and can transcend borders, has provided me with the perfect platform to create a show like Churails.”

“A story about strong women, embarking on a journey of self-discovery, empowerment, and sisterhood, I believe Churails is a timely show with pertinent themes that will resonate with audiences globally,” he added.

The show’s trailer is getting so much attention, even Indian director Anurag Kashyap tweeted about it. Anurag is famously known for giving us Gangs of Wasseypur.

Had no clue this was directed by @IllicitusProduc .. adding to my watchlist . His first film “Cake” was such a delight .. https://t.co/4KaEfrFuud

#churails just showed the middle finger to Pakistan's esteemed censor board and relics sitting in privileged positions, approving only archaic content that belongs in the 1920s. #showtimemotherfuckers! I didn't say it!

#Churails
In the guise of women's rights, unconsciousness, shamelessness, to show their men down, to promote homosexuality, through 5th generation wars, labels(to promote feminism)have made a series/movie called "churail". This poster has "abuses" written everywhere on the hijab pic.twitter.com/KgQgGwHkQP

Pakistani art hitting new milestones, The trailer was epic, exceeds my expectations. I knew this was gonna be good but the plot meri soch se zyada interesting he. My type. Crime: incestigation: thriller!#Churails https://t.co/25FWC3b6Bq

Proud to see such good content coming out of Pakistan

1stly, this pseudo feminist blocked me bcoz whoever differ from her point of view is a troll in her book & she ran a campaign against Ali zafar in misha case
Those shows don't target genders, churails do.
Aurat march with vulgar slogans is turned into a webseries #Churails pic.twitter.com/jx0Wx7FBjK

Whatever the case may be, Churails is ready for its premiere on August 11. Even though the narrative remains divided, the production and quality of the show are hands down, one of a kind.  This in turn, also showcases the progressive side of Pakistani cinema. Will the future be similar? Only time will tell.