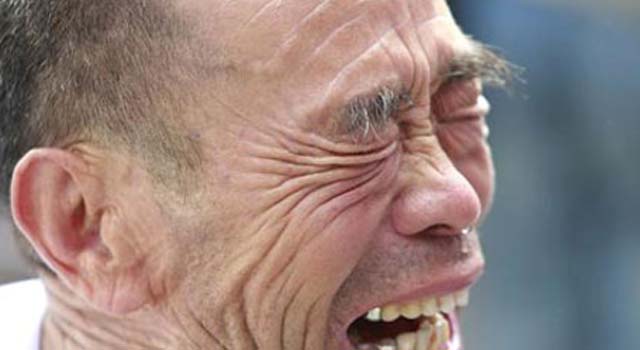 ÃœrÃ¼mqui: A group of coal miners from the western province of Xinjiang, had an unbelievable surprise when the gallery they were excavating opened up on a section of an old mine, that was abandoned 17 years ago after an earthquake that caused some large sections of the tunnels to collapse.

While they were exploring the galleries, they stumbled upon Cheung Wai, a 59-year old survivor from the 1997 accident, obviously in a rather bad shape.

He was immediately taken to the hospital where a complete evaluation of his physical and mental states will be done over the next weeks.

The poor man had remained trapped underground with the bodies of 78 of his dead coworkers, after an earthquake of a magnitude of 7,8 hit the region and caused the wooden support structure of the mine to crumble and collapse.

Somehow lucky in his misfortune, Mr. Cheung was saved by the fact that some ventilation duct still connected his underground prison to the surface, allowing him access to air that was sufficiently pure to keep him alive.

He managed to survive thanks to an emergency stash of rice and water, stored in an underground depot, conceived especially for this kind of case.

The man complemented his diet by catching and eating the countless rats that pullulate in the mine, as well as collecting large quantities of some sort of phosphorescent moss, which constituted his only source of vitamins.

Even though he was suffering from great physical and mental stress, he managed to give proper burials to all of his comrades, spending almost a year in this great selfless act.

Mining accidents remain common in China despite growing measures by the government to reduce the problem, which killed more than 4000 miners a year at the beginning of the millenium. Over the last years, the authorities have been cracking down on many unregulated mining operations, which account for almost 80 percent of the countryâ€™s 16,000 mines.

The closure of about 1,000 dangerous small mines last year helped to cut in half the average number of miners killed, to about six a day, in the first months of this year, according to governmental statistics.

The case of Mr. Cheung remains unique however, and constitutes a world record, according to the universally recognized authority on record-breaking achievement, Guinness.

The former record for surviving underground was of 142 days and was held by a british man named Geoff Smith. He had been voluntarily buried in the backyard of the Railway Inn, his favorite pub, with the intention of breaking the record.