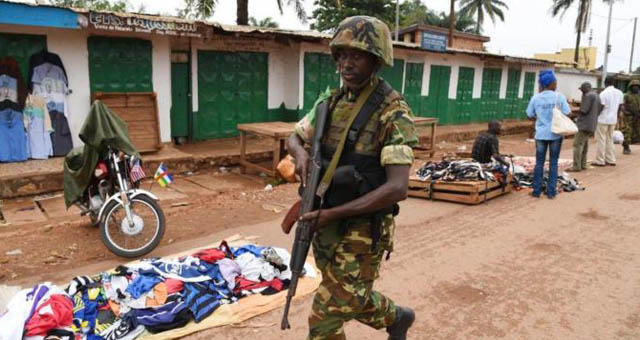 At least 15 people, including children, have been killed in an attack on a town in Central African Republic near the border with Chad, a local official and aid workers have said.

It was reported on Friday that explosions were heard in eastern Markounda mid-afternoon on Thursday. Shortly afterwards a group of armed men wearing both military and civilian clothes entered the town and began looting and attacking residents.

“We estimate at around 15 the number of people killed, including men, women and children. Markounda is now empty as the inhabitants have fled into the bush, the fields and neighbouring villages,” Lucien Mbaigoto, deputy prefect for the town, told Reuters news agency by telephone on Friday.

Peter Bouckaert, emergency director of Human Rights Watch, said on Twitter that 13 had been killed, including eight children. It was not immediately clear who was responsible for the attacks.

The head of a new European Union peacekeeping force, Major-General Philippe Ponties, told a news conference on Friday that there would be 850 soldiers in place by June and that their task was to secure Bangui airport in addition to the third and fifth districts of the capital.

“The objective that we are looking for, and which I think we share with most of the international community, is to make it so each citizen of Central African Republic, whatever their communal background, can see a positive future,” he told reporters.

The news conference was held in the VIP lounge of Bangui’s main airport, with the EU peacekeepers taking over airport security on Wednesday.

The presence of peacekeepers has failed to stop thousands dying as result of in inter-communal violence in the vast, former French colony. Close to one million people have been displaced.

Revenge attacks on Muslims have increased since January, when interim leader Michel Djotodia and his prime minister, Nicolas Tiangaye, stepped down under international pressure for failing to establish authority over the poor, landlocked country.

The mainly Muslim Seleka forces seized the capital Bangui in March 2013, setting off a wave of killing and looting that prompted the Christian majority to form self-defence militia, known as “anti-balaka”.

Amy Martin, head of the United Nations Office for the Coordination of Humanitarian Affairs in Bangui, said several armed groups were active in the border area including Seleka fighters who had formed alliances with armed Fulani herdsmen.

The UN said on Friday it was expanding its operations in CAR, distributing 60 per cent more food in April than in March.