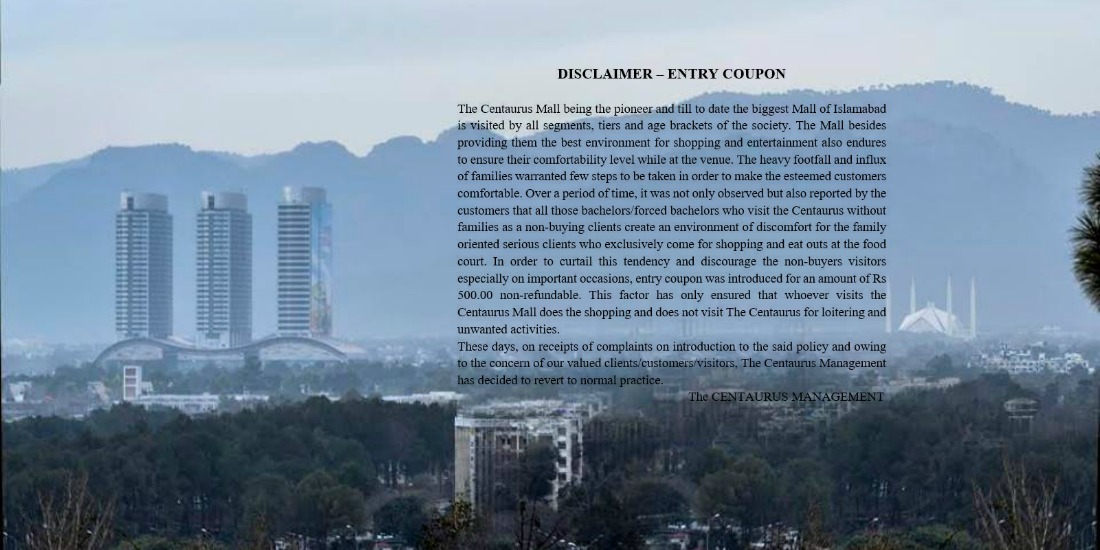 Centaurus Mall in Islamabad received poor reviews and was subject to a lot of criticism after it introduced its sexist policy for controlling the shopping mall’s environment. After ending their previous policy of making groups of men, or as they say “bachelors”, purchase Rs 300 coupons out of which Rs 250 was refunded, the authorities introduced Rs 500 nonrefundable tickets. Such method quickly grew hatred for the mall itself and the authorities were receptive enough to notice this at least.

The Centaurus Mall authorities issued a reply in the wake of the growing criticism towards their recent action and here it is:

As you can see, the shopping mall authorities believe that it is groups of men who are believed to bring discomfort to the families or any woman inside the premises. Hence, it is only fair that only men should pay a ticket of Rs 500 in order to keep them away from “unwanted activities”. However, the mall seems to have no regards for groups of men who genuinely come to the mall for shopping or dining purposes. By handing them a Rs 500 nonrefundable ticket, they have generalized every man in the category of “desperate” may it be two brothers going inside to buy clothes, or even a father-son couple, or perhaps even friends who just want to shop and get out.

However, the policy instantly becomes inapplicable if those group of men have even one totally unrelated woman among them because that scenario becomes “family-like” and is absolutely not discomforting for the families at all.

Although the Centaurus mall authorities say that they have reverted back to normal practices, they must take notes from the much larger shopping malls of Karachi and Lahore who attract a much larger crowd and contain more features and facilities than Islamabad’s only shopping mall.