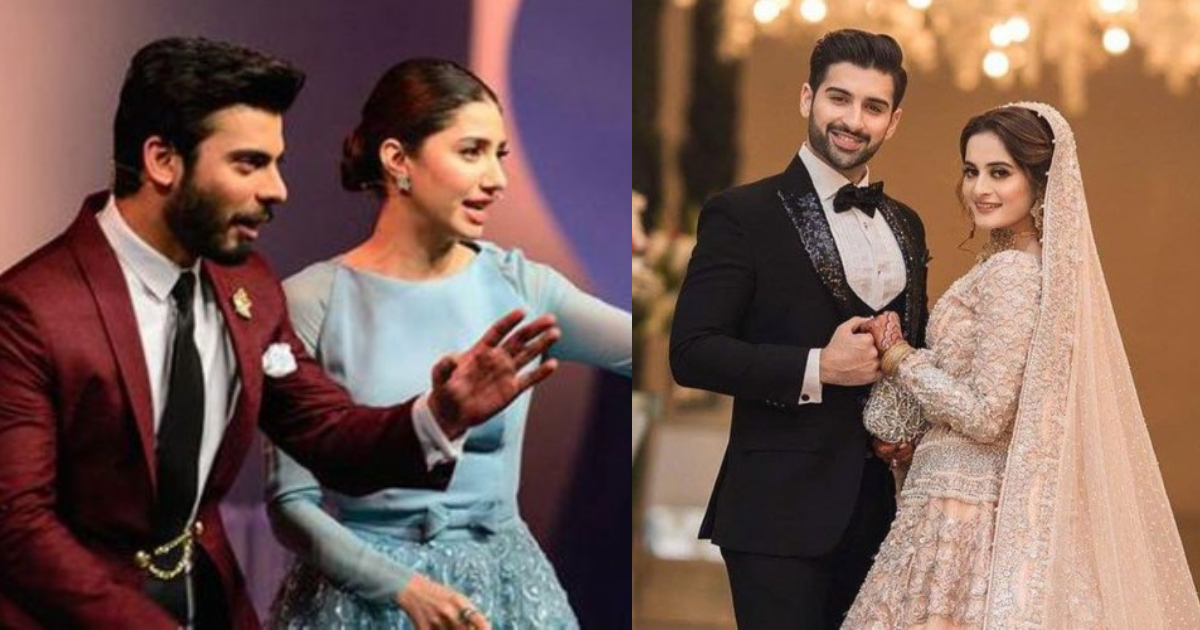 Pakistani celebrities and the gossip that comes from their “secretive” relationships is what keeps the internet and most of Instagram going. Isn’t it? Celebrity relationships keep the hot-news more HAWT! Like who’s dating who, and who’s getting married and who isn’t! Also, the insider information for which we all die for — “why they stopped dating each other”! Well, there are certain things which celebs try to keep under the rug.

There are other things which make certain couples the most loved amongst people. There are many on-screen couples which we wish were real-life couples. You know who we are talking about! Lol! Mahira and Fawad, no? Liar! We all have chupkay chupkay wished that they were together in real life! Even if they are not a real-life couple, this on-screen celebrity couple proved to be quite lucky for each other. How? Their drama serial Humsafar, got them to reach the milestone which they dreamt of all their life. Maybe there’s more to come for both but their big breaks for Bollywood movies came after the popularity of this drama serial in India.

They look amazing together and sure make the BEST on-screen celebrity couple! 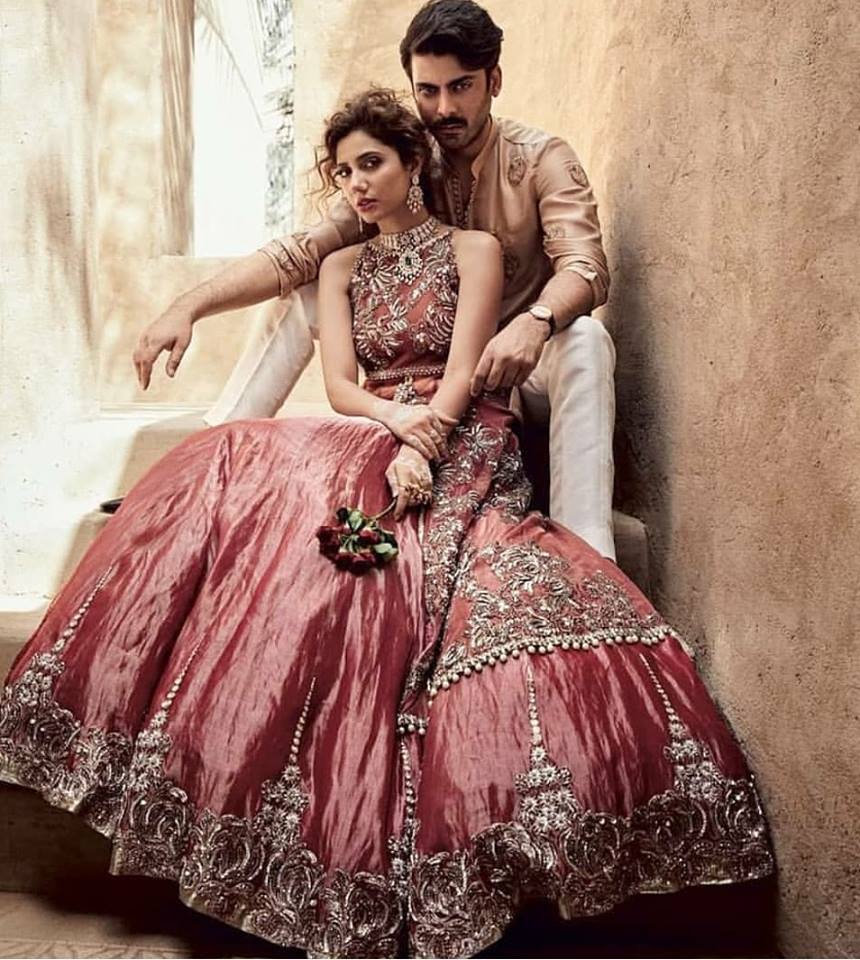 Fawad got married quite early, and is now a father of two beautiful kids and he along with his wife make a beautiful pair! They love each other and support each other to reach the place where they both are today. Celebrity relationships personified!

Fawad Khan proved to be the best actor, friend, husband, and father! His name was in the “Top Sexiest Asian Men” list! *Heavy Breathing* 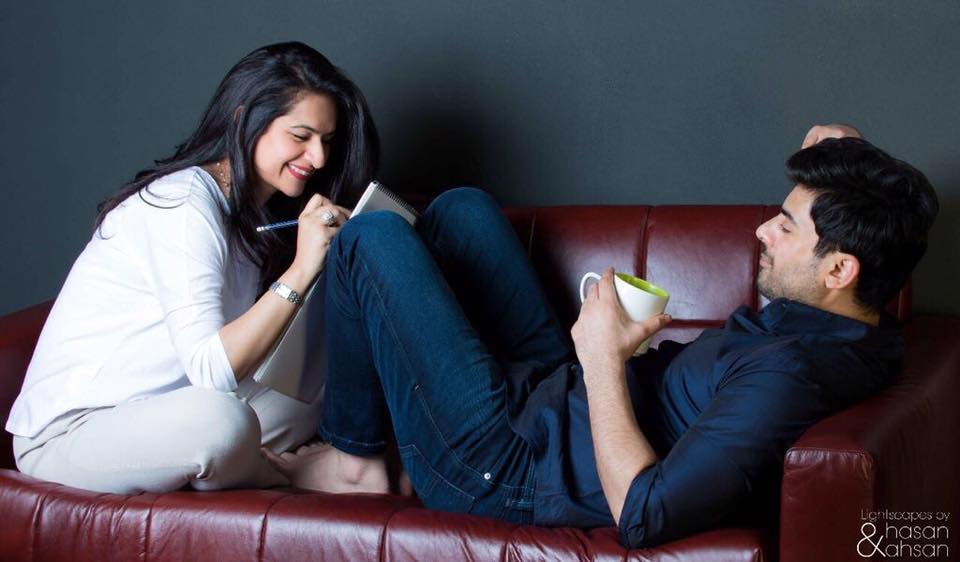 Looking back at the times of some amazing music bands of Pakistan and kick-ass VJs, Farhan Saeed and Urwa Hocane make the a one in a million celebrity couple, elevating the relationship. Probably the hottest of all! You would agree to it, no?

Both of them have earned their place in the industry through hard work. Urwa and Farhan have worked together, bringing their best work out. They support each other and know that they have got the best partner in each other. They broke the years’ old myth about celebrity relationships being fake and short-lived, Farhan and Urwa are growing strong with each passing year of their marriage. Kudos!

Get yourself someone who looks at you the way Farhan and Urwa look at each other! 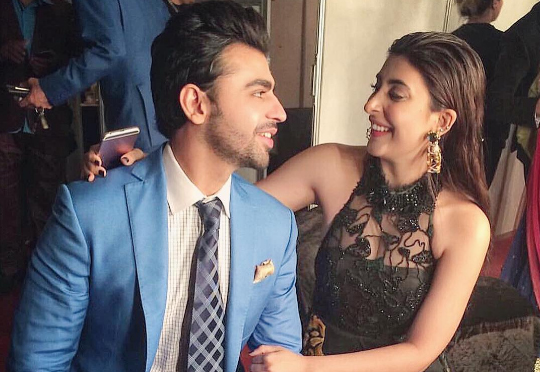 While all this was happening, out of all the celebrity relationships, Sajal Aly and Feroze Khan’s break up was the most shocking of all! People paka paka thought that both of them will end up marrying each other but oh well! The breakup came into notice when someone stalked both of them on Instagram and found out that they have deleted each others’ photos.

Well, they both seem quite happy now and Feroze got married, and the good part is he introduced his super adorable wife to his fans. Since then, not just his fans but his family too is head over heels for his wife Alizey Raza!

They make the cutest couple!!! 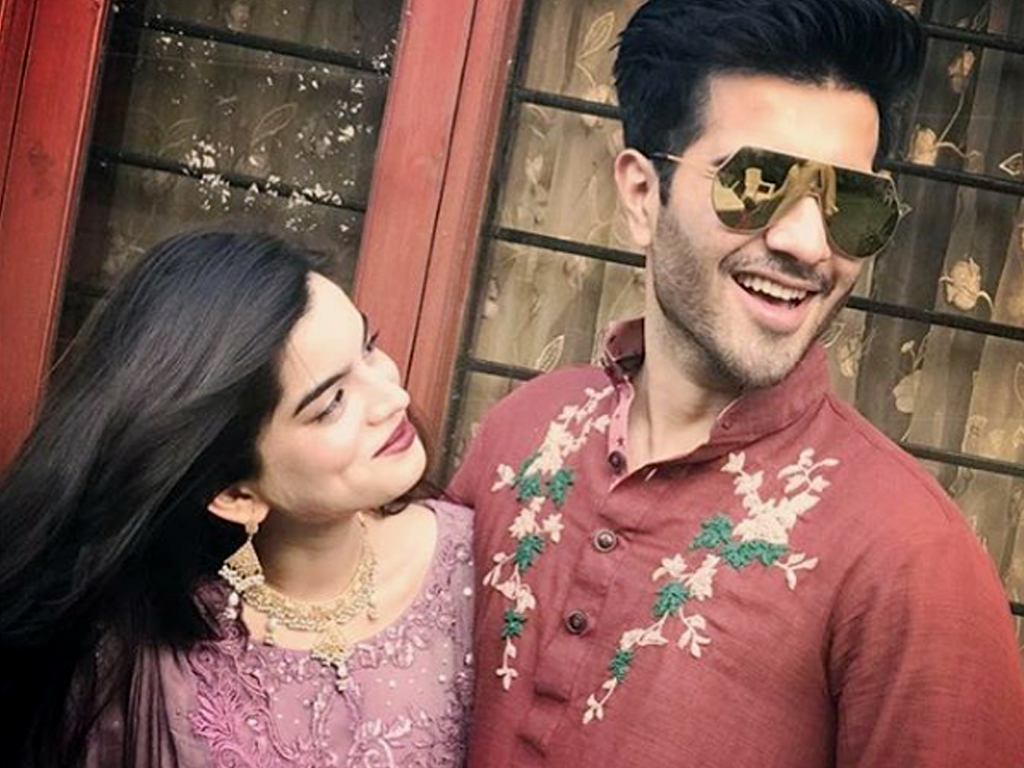 Right right, after Feroze’s wedding we got to hear that his best friend and best co-actor Aisha Khan is getting married too! The beautiful lady posted a photo with her fiance and who knew that everyone would love this couple so much. Aisha Khan has never been involved in any controversies which are very rare in our industry, working in showbiz and not getting involved in stupid rumors is a blessing. She’s not been involved in any relationship with a celebrity before.

But after her engagement, Aisha decided to leave showbiz forever and it broke many people’s heart but they all wished her good luck for her new life.

“I have always tried to keep my professional and personal life separate and request everyone to understand please,” she stated in the message. “I would also like to let my colleagues and friends know about the limitation that I might have had in accepting new projects since 2016 out of which a few scripts stayed with me for a long time. My apologies.” Aisha Khan wrote in her Facebook status before marriage!

Major Uqbah may not be a celebrity, but after this marriage, they became the most loved celebrity couple. 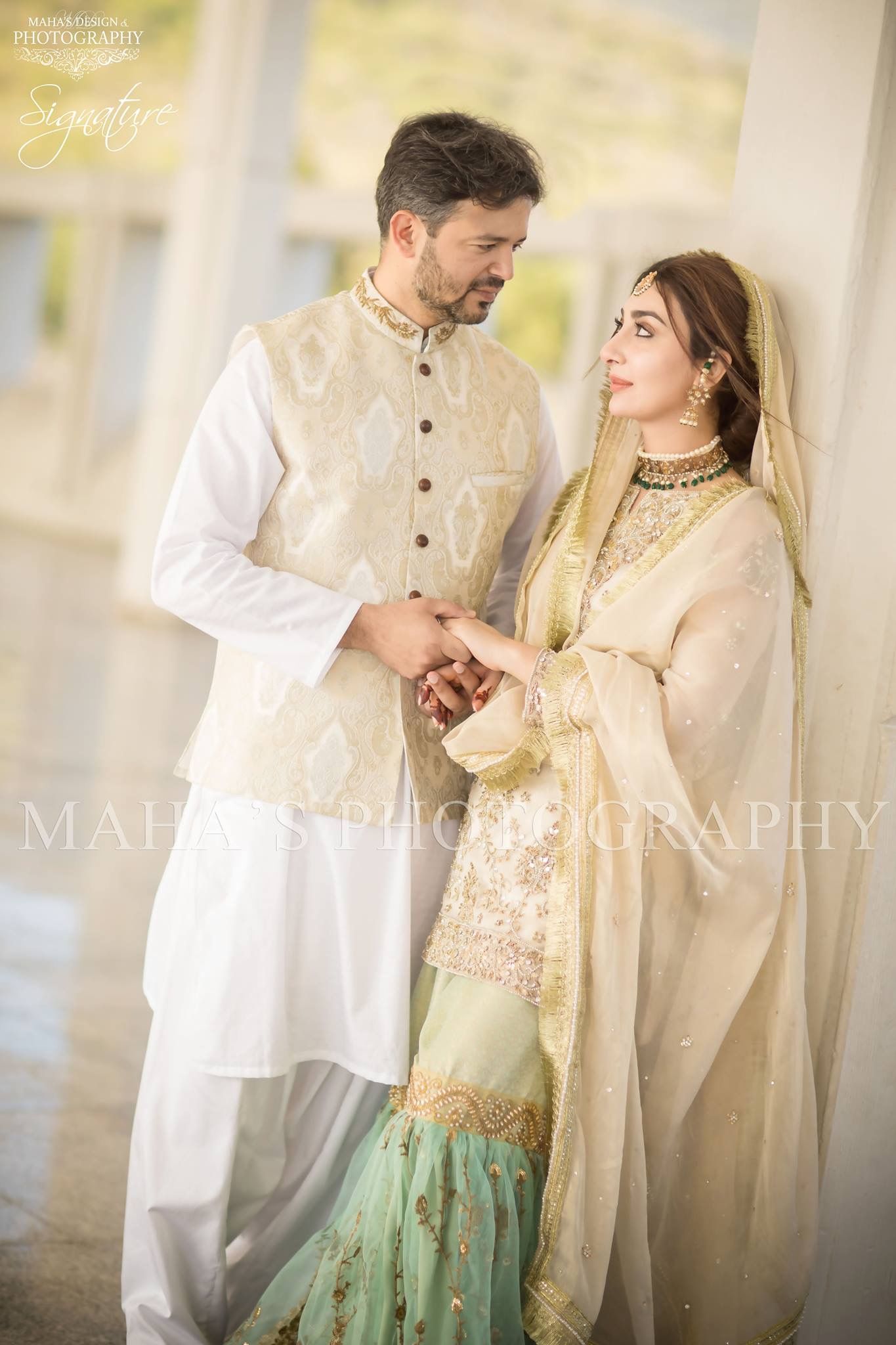 There’s always news about celebrity relationships on the internet, but this one couple stuck together. through thick and thin, while the world waited for them to tie the knot soon.

They enjoyed their wedding to the fullest, that was actually the best part! Isn’t it amazing? 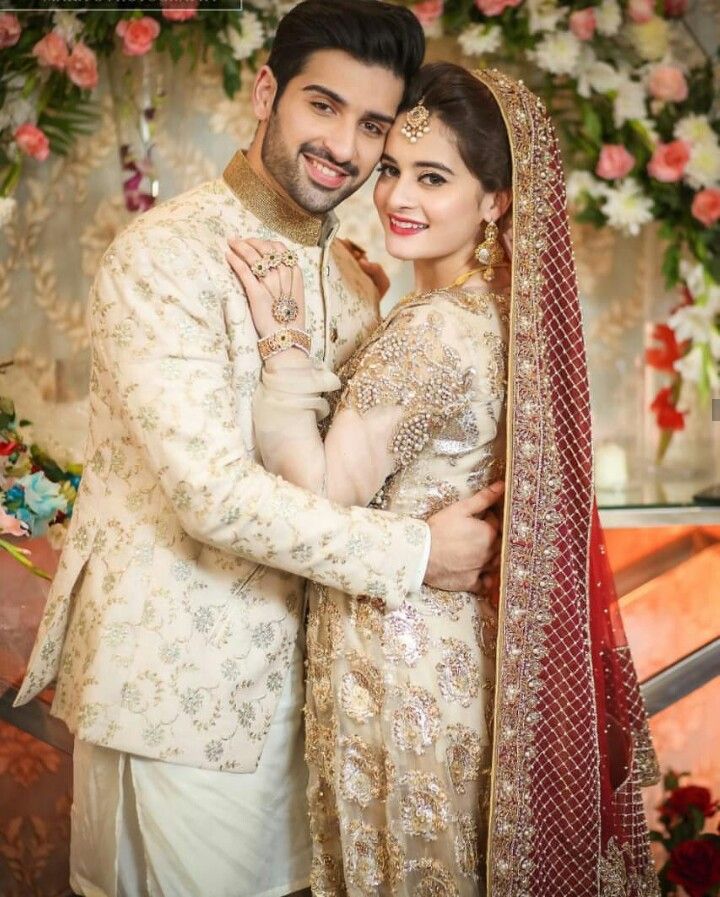 Aiman and Munneb Butt started dating long ago, and they both were usually seen in movies and coffee hangouts. Two years back they both got engaged in a small ceremony where only friends and family were invited, people were looking forward to them getting married. Last year, when they announced their wedding date, the list of events shocked many people! LOL! 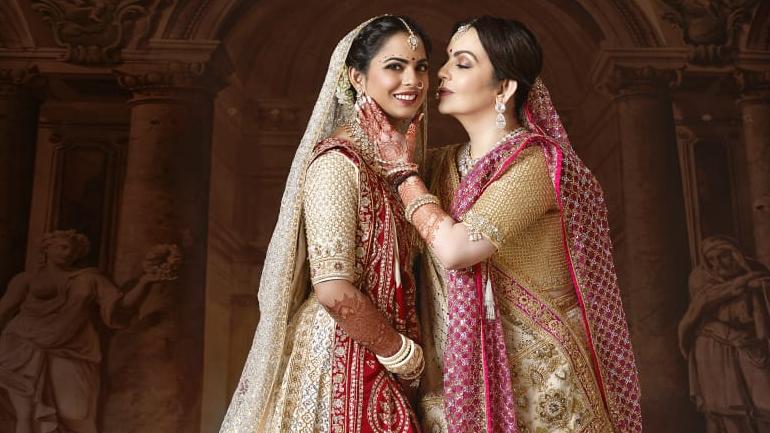 Isha Ambani and Anand were in a relationship for a long while as well. There were rumors of them getting married in some exotic place but they chose their homeland. We can very easily call this wedding to be the most expensive of all! After all, this is the wedding of the daughter of India’s richest man. 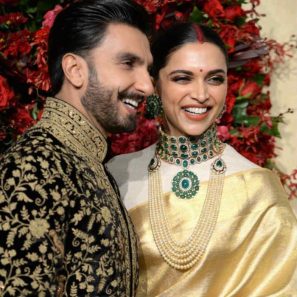 Ranveer Singh and Deepika Padukone who got married on November 14 and 15 after six years of dating have gone on to set a whole new level of relationship goals. Ever since the couple has tied the knot, they haven’t stopped talking about each other and expressing love at each and every platform. 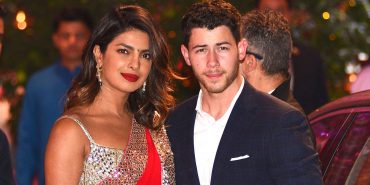 Priyanka Chopra and Nick Jonas got engaged in late July in Greece and capped off their engagement on the bride-to-be’s 36th birthday in London–in a romantic gesture right out a scene of a movie. Straight out of the opening scene of Sweet Home Alabama, Jonas took his bride-to-be to Tiffany & Co. where she picked her ring! The duo tied the knot on the 1st of December 2018. 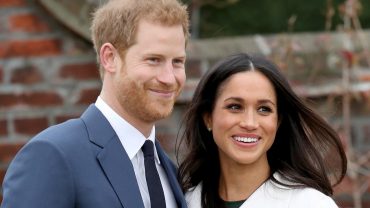 The two tied the knot on May 29th in 21018 and the wedding was really a royal affair! The couple is now expecting their first child and we can’t hold our excitement in. While Prince Harry, is a member of the British royal family; the bride, Meghan Markle, is an American former actress.

But guess what, who is everyone’s new favorite off-screen celebrity couple? Iman Ali and Babar. <3 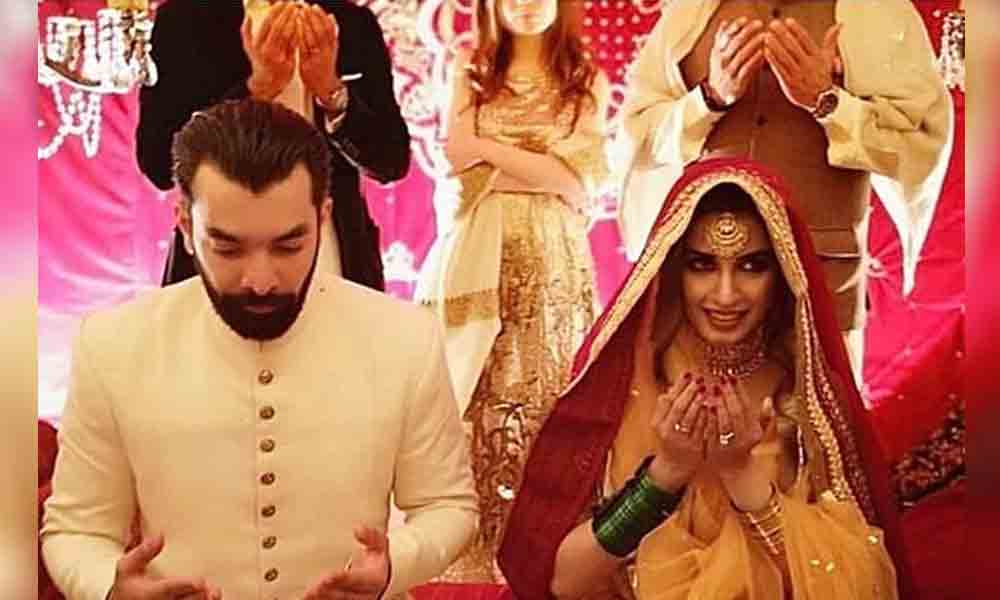 Nobody knows when is her baraat is but we keep refreshing our newsfeed to get the first update. Waiting like a jasoos phuphoo and scrolling through Instagram to check hawt celebrity relationships, haha! Celebrity marriages are pouring like rain, every other celebrity is getting married. And we are sitting here like couch potatoes, singing “single bells single bells single all the way”!

These pretty ladies getting all dolled up on their big day is surely giving you major bride goals! GOD! Who looks this pretty? Aur kon kon shadian kar raha hai? Please get married soon, our Insta feed is looking empty already! And if any of the celebs are getting married, it better be a big fat wedding. Okay?

Read Also: Tragic Life Stories of these 8 Celebrities will Break your Heart

Here’s Everything You Need To Know About Ahad Raza Mir!
JS Bank Becomes Pakistan’s First Financial Institution To Be Accredited By The Green Climate Fund
To Top