Celebs Call Out Authorities For Banning YouTube In The Country

Pakistan Telecommunications Authority (PTA) has been quite active nowadays as they consistently ban different applications in Pakistan. This is making the lives of many people difficult and also limiting them from having a good leisure time at home.

From banning PUBG to having other applications and social media sites banned. The list goes on. However, recently, the Supreme Court has hinted towards a ban on most used video uploading, sharing and watching apps, YouTube, and people are not happy.

It might cause many difficulties for people who are earning their bread and butter with the YouTube platform.

Celebrities call out govt, PTA for the ban on YouTube

Even celebrities are coming out to call PTA for the imposition of this ban, and to request them to nullify and ignore it. Pakistani celebrities are always ever ready to share the spotlight and to school those who are doing anything incorrectly.

Really? Banning YouTube??
What next – Twitter, insta,FB, Netflix or even WhatsApp? Freedom of speech is the basic tenet of any society. In Pakistan, social media provides checks & balances that mainstream doesn’t. Progressive states shouldn’t need to resort to bans!! #YouTubeban

Tamgha-e-Imtiaz honorary, Hayat, took to Twitter to share her disregard on the matter. In addition, Ahmed Butt also defended her by posting his disappointment towards the ban. 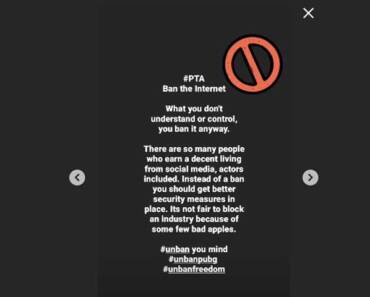 #YouTubeban There is a massive industry of content creators, digital makers and entertainers in Pakistan that survive on YouTube. Filter content would be a great idea but Banning YouTube will only create more idleness and negativity amongst the professionals and the public.

She mentions that YouTube in itself is a massive industry and cutting out content creators, and entertainers source, is just going to make the society dull and also stop young talent from growing. And it does make sense.

#YouTubeban We have already lost too many jobs due to this Pandemic. Lives.. Let's be moderate in this Ban towards YouTube. If downsizing and joblessness continues like this, the next big pandemic could be mental inactivity which will cause further crimes and induce negativity.

Even different YouTubers who have earned fame and stardom through the platform are fighting for unbanning the platform.

It also makes us realize that YouTube isn’t just a platform. No, it is becoming an entire industry for Pakistanis.

In fact, many foreigners come to Pakistan after learning about the beautiful sites of Pakistan. They learn about them from viral videos on YouTube.

So now the question is, whether banning such a major digital industry really a wise choice?

In addition, how will a 400 million dollar industry be compensated? We know that excessive use of any application, YouTube, Tik Tok, Snapchat, etc. is indeed harmful. However, is it really wise to make sure that the use of an app that is allowing to promote growth in the economy be banned?

Perhaps now is the time to put our thinking caps on. As of now, no confirmation about the YouTube ban. Let’s just pray it stays that way and YouTube isn’t banned after all.