Narrated Abu Sa‘îd Al-Khudri Allah’s Messenger said, “If a person embraces (converts to) Islam sincerely, then Allah shall forgive all his past sins, and after that starts the settlement of accounts: the reward of his good deeds will be ten times to seven hundred times for each good deed, and an evil deed will be recorded as it is unless Allah forgives it.” (Sahih Al-Bukhari, Vol.1, Hadith No. 40A).

Being born in a Catholic household and practicing the very religion for years, Allah blessed her in His own way. For 3 years, she was studying the religion of peace, Islam. It takes courage to go against what you preached your entire life. On the other hand, blessed are those who see through the light and choose the right path. 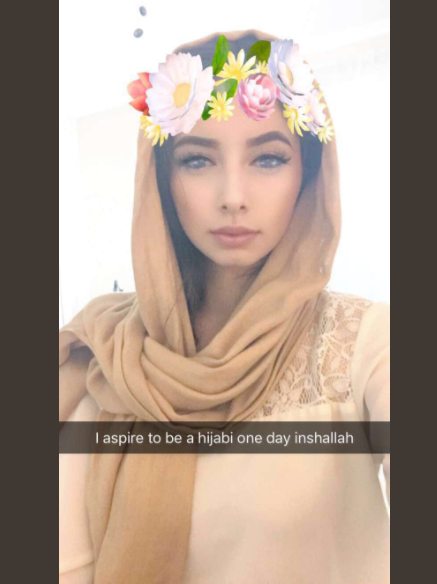 On 22nd October 2017, Laura Announced that She has now taken her Shahadah!

After 3 yrs of learning & practicing, I finally took my shahada today. Thank you to everyone who has ever helped me may Allah SWT bless you pic.twitter.com/tGqFOAjSFn

Despite her Embracing Islam Just Recently, Laura Studied the Religion for 3 Years

Ramadan in Florida is gonna go a little like this but I can't wait I'm so excited ??? pic.twitter.com/lLbl0x1vhL

What makes Laura’s conversion to Muslim even more beautiful is how she took her time to study the religion, practiced the norms and then took the decision. She may or may not have faced any difficulties, but the way she took her way around the path is noteworthy.

A Couple of Days Ago, Laura Listed Down Some Great Messages for Muslim Converts and for those Who are Looking Forward to Joining Islam

THREAD FOR MUSLIM CONVERTS/REVERTS OR PEOPLE LOOKING INTO ISLAM???

I would like to start off by saying Bismillah
Anything that I say that is correct and true is from the will of Allah and wrongs is my fault.

My name is Laura, I was born in Bogota, Colombia and I was raised Catholic my whole life. I have been studying Islam for 3 years now,

And that’s how it all begins

And I continue to study and learn every single day. I am not a perfect Muslim but I try my best to do what is right.

An inspiration for many out there

Let's start with the word "Islam" it means submit, but its also derived from the word "Salam" which means peace.

A Muslim is someone who "submits" to God (the Arabic word for God is Allah). This means that although a person has free will, he obeys God.

A little piece of advice from Laura

I would like to advise that it is important to research and learn a good amount about Islam before you become Muslim. My biggest issue was

That I wanted to know everything before I took my shahada. (I'm a bit of a nerd but idc) You have to understand that everyday u are learning

As Laura mentioned, it is important for one to study and research when they wish to convert. Islam is a beautiful religion. It welcomes all the people, despite their race, ethnic backgrounds.

We welcome Laura to the best religion in the world. May Allah guide you with ease and success, Ameen!