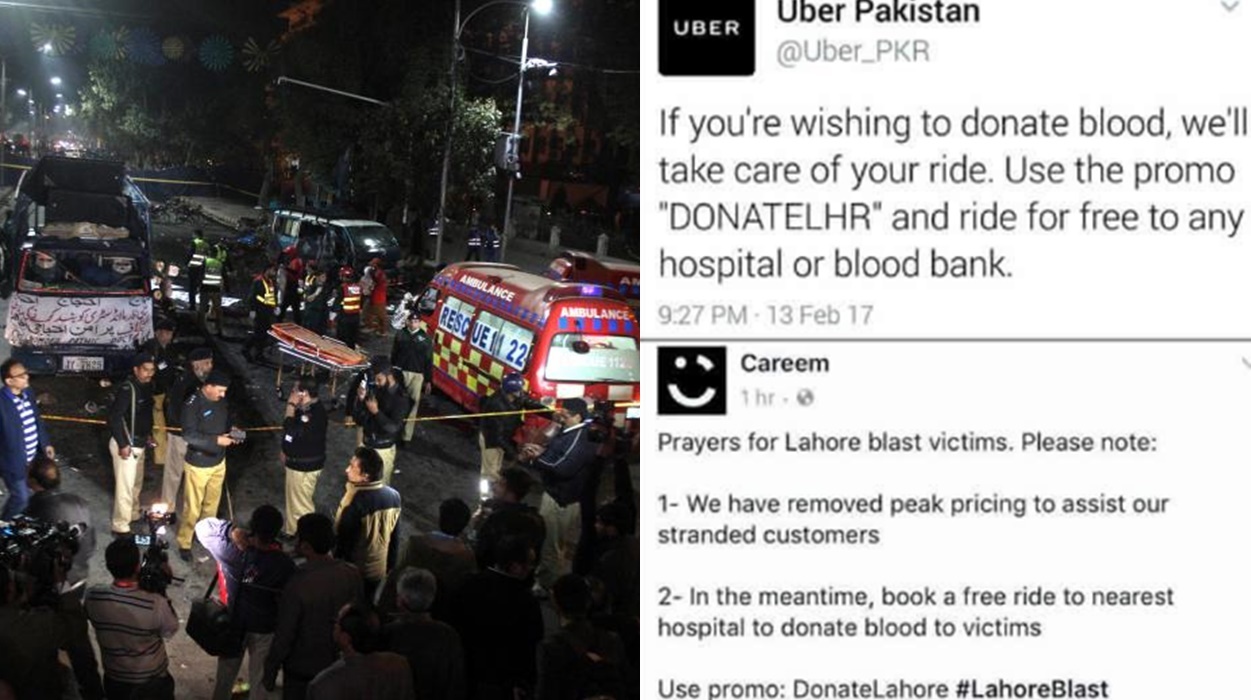 Yesterday was indeed a black day for Pakistan. With a blast in Lahore and Quetta which killed and injured various citizens, Pakistan yet again bled for reasons unknown. Speculations regarding the ‘mastermind’ behind these attacks continue to grow as we see another light.

Regardless of how uncontrollable the occurrence of such unfortunate events for common population is, one thing that glues us all together is how we keep ourselves united during such crisis. This can be seen how the cab driver of local taxi service guarded his customer when the appalling event took place in Lahore.

Local taxi services Careem and Uber are largely used by Pakistanis. In solidarity to what happened in Lahore, two major hospitals, Mayo Hospital and Sir Ganga Ram Hospital required blood donations as victims were treated in these medical care facilities.

In the meantime, book a ride to the nearest hospitals to donate blood for victims.
Use Promo code: DonateLahore
NOW booking only.

If you’re wishing to donate blood, we’ll take care of your ride. Use the promo “DONATELHR” and ride for free to any hospital or blood bank.

The efforts of the two cab services were largely appreciated and used by those wishing to donate blood as well.

While the corporations showed full support, Munira Mehdi explains how her Careem driver, during such horrific time stood for her in an area which was full of danger. Here’s what she said:

“I need to bring to your attention that you have a guardian angel by the name of Mr. Asim Mustafa disguised as a Careem Captain! Shortly before the blast, I was picked up from Mall road by your captain and was on the way to Johar town when I got news about the blast.

Fear gripped me as to how I would get back to the place where I am residing which is right next to where the blast occurred on Mall road! Being a lone female traveler in another city, my only concern was to make it back safely.

I requested the Captain of the car if he could turn around and head back to Mall road. Without missing a beat, he agreed to do so even after knowing the risks of going back.

I was getting back to back calls from loved ones in Karachi and my office colleagues, but my hopes were banked on the stranger who was driving the car. I just kept praying that he didn’t change his mind and end the ride there (I wouldn’t blame him if he did though!)

Mall road was cordoned off a couple of hundred meters from all sides. The captain tried to get me closer to the hotel through different routes but there was simply no way and so he parked his car to the side.

Just when I thought I’m going to have to walk all by myself in the dark to reach my hotel, the captain said to me ‘Baji aap fikr na kare, aap meri responsibility hai. Main aapko paidal drop karke aonga, chahein kuch b hojaye main aap ko sahi salamat pohochaonga.’. He got out of his car and walked with me for 10 minutes in the dark before we reached my destination. Even though he was getting calls from his loved ones about leaving the high risk area, he still made sure he dropped me off safe and sound. I could not express my gratitude in words!! Alhamdulillah.

May he get rewarded for this naiki in this life and the life Hereafter. Ameen!

It takes an extremely brave person to keep someone else’s life ahead of his own and Captain Asim Mustafa proved this yesterday. May Allah bless him with more strength, Ameen.

This Guy Reveals The Most Bizarre Thing Happened To Him When He Tried To Take A Picture Of A Lion In Lahore
This YouTuber’s Unique Efforts In Harmonizing Pakistan Is Certainly Worth A Praise!
To Top