Caño Cristales, the Most Colorful River Of The World! Watch The Video! - Parhlo 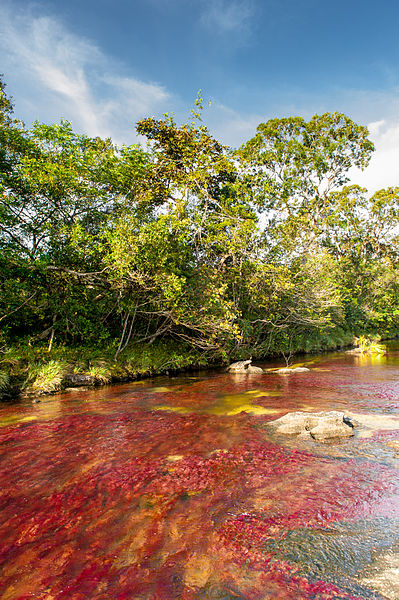 Caño Cristales is one of the most beautiful rivers of the world located in Columbian province of ‘Serrania de la Macarena’ province of Meta, the region of Columbia. Owing to its colorful nature, Caño Cristales is known by a few names such as “river of five colors,” “the river that ran away from paradise,” and “the most beautiful river in the world.”

For half of the year, Caño Cristales doesn’t look much different to other rivers. The river bed comprises of algae and dull green mosses easily visible because of clear current and clean water. The magic occurs in the latter half of the year when the river grows in an effervescent combination of colors. It’s during the short duration of time between wet and dry seasons, when the river is filled with high level of water that specific species of river plants that spread out on river known as Macarenia Clavigera blossom and turns a beautiful flashy. It is beautifully blended into other vibrant colors contributed by yellow and green sand, blue water, and numerous textures and colorful patterns in between. One wonders why Caño Cristales doesn’t blossom with vibrant colors during Columbia’s wet season. Well, it’s because the flow of the water which is too fast in wet season obscuring the sun light to river bed and Macarenia Clavigera that it needs to turn bright red. However, in the dry season, the lack of water in the river don’t muster much life in the river bed thus no colorful species. The epitome of colorfulness is during the few weeks in between the months of September and November.

Caño Cristales is situated in the remote isolated region not frequently accessible to tourists. But, there is tourist program offered which takes tourists to this beautiful river. Tourists can begin their adventurous trip by visiting the nearby town of La Macarena. From there, they are organized a bus or van taking them through a short trip to National Park called ‘Serrania de la Macarena’, in whose heart is located the river of five colors, Caño Cristales. The river Caño Cristales has aquatic plants but is devoid of the fish. The water of the river is extremely clean due to the lack of nutrients and small particles. The river is 100 kilometers in length. If you’re willing to visit this beautiful river, you must visit it during the months of September and December when the river seems a piece of the paradise left in the world.

The Star of Pakistan, Younis Khan is One Naughty Boy!
The End of Tahir-ul-Qadri’s Dharna!
To Top