This Cafe in Islamabad Aims To Become The Talk Of Town! 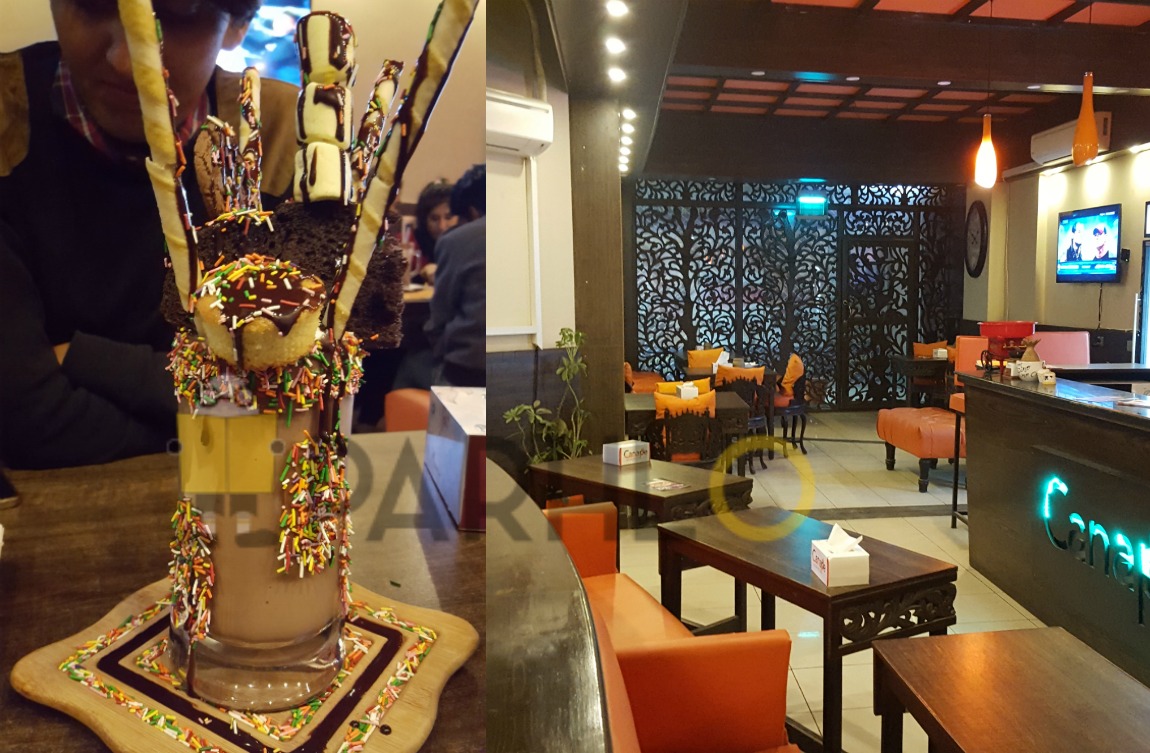 When a person hears about a new eatery opening near them, their first thoughts are mostly associated with food and ambiance. And why should they not? Food and ambiance go hand in hand, and each of the factors contributes to the absolute satisfaction of the person who later walks out of that restaurant with a filled stomach. This is what is going to be discussed here as we look into this cafe in Islamabad (also a juice bar) that recently opened, Canape.

The idea of Canape was started by Abeer Kiani, and her husband Mr. Wahaj. The passion of doing what they love is what drove the couple to this remarkable achievement. Ideas and think tank belonged to Abeer while Wahaj gave them a physical shape. That is how they built a small, yet cozy, juice bar, later expanding it as they progressed in time and success. 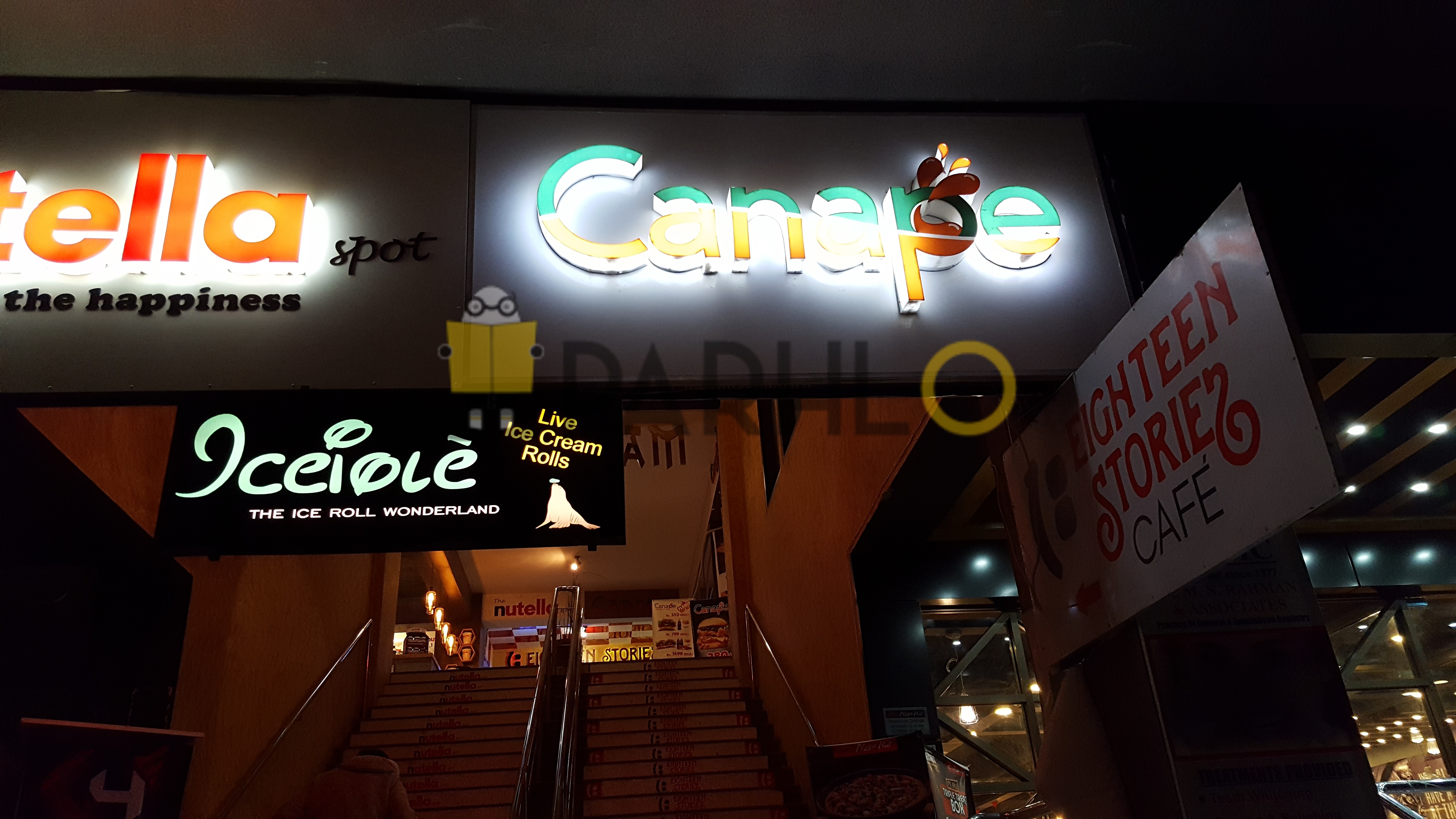 Present in F-11 sector Markaz it is easily accessible as the place is on the main road just beside Pizza Hut. An average set of staircase takes you up towards Canape which you can easily recognize by their well-lit sign at the counter. 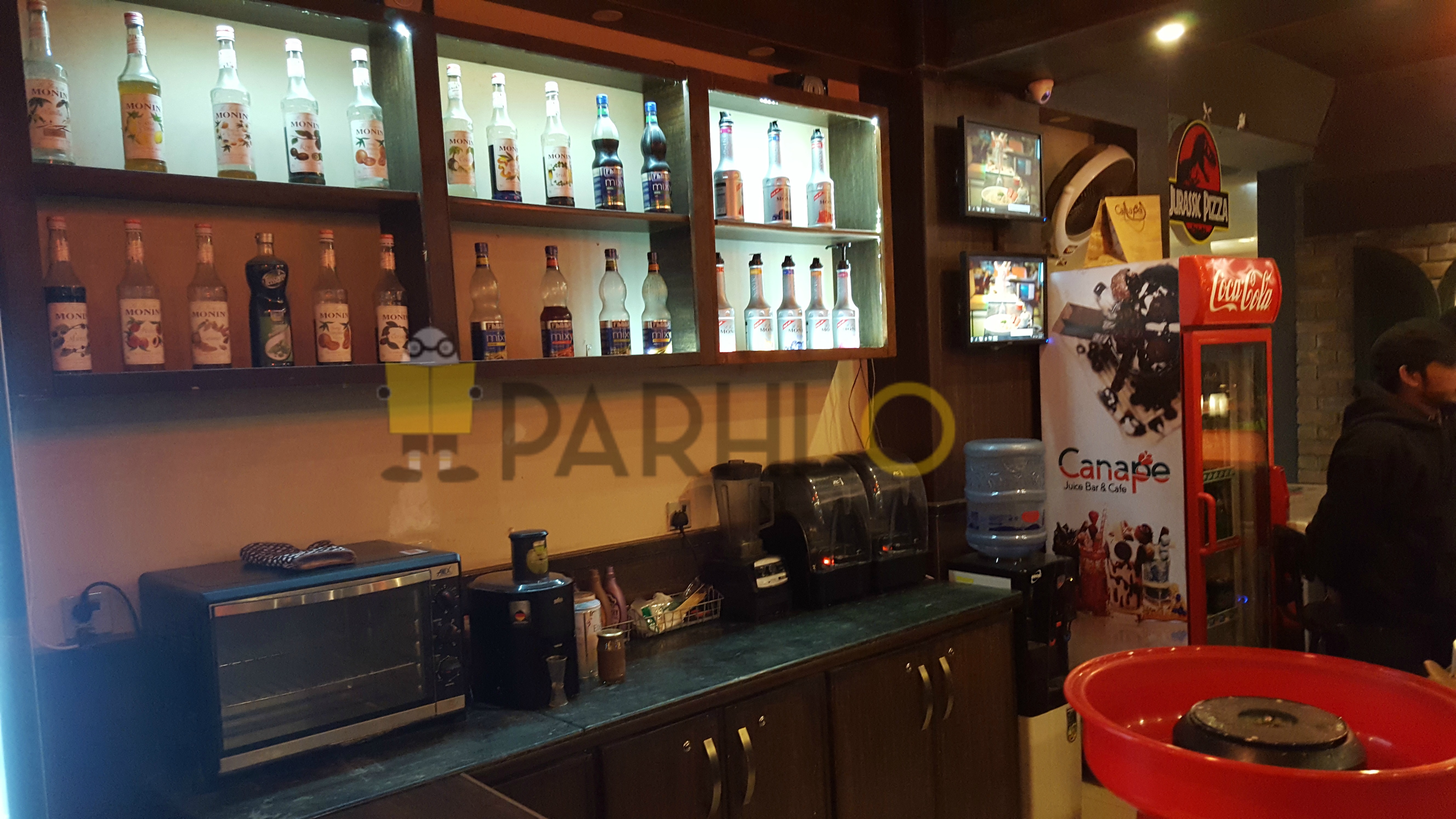 Every restaurant aims to develop a certain theme of its precinct, they try to make customers feel like they are in some different realm. Canape tries this by setting an orange hue. However, one may wonder why orange had to be the color of choice as not everyone seems to be a big fan of the color, studies reveal (kissmetrics). Yet, credits have to be given for maintaining a theme quite handsomely. 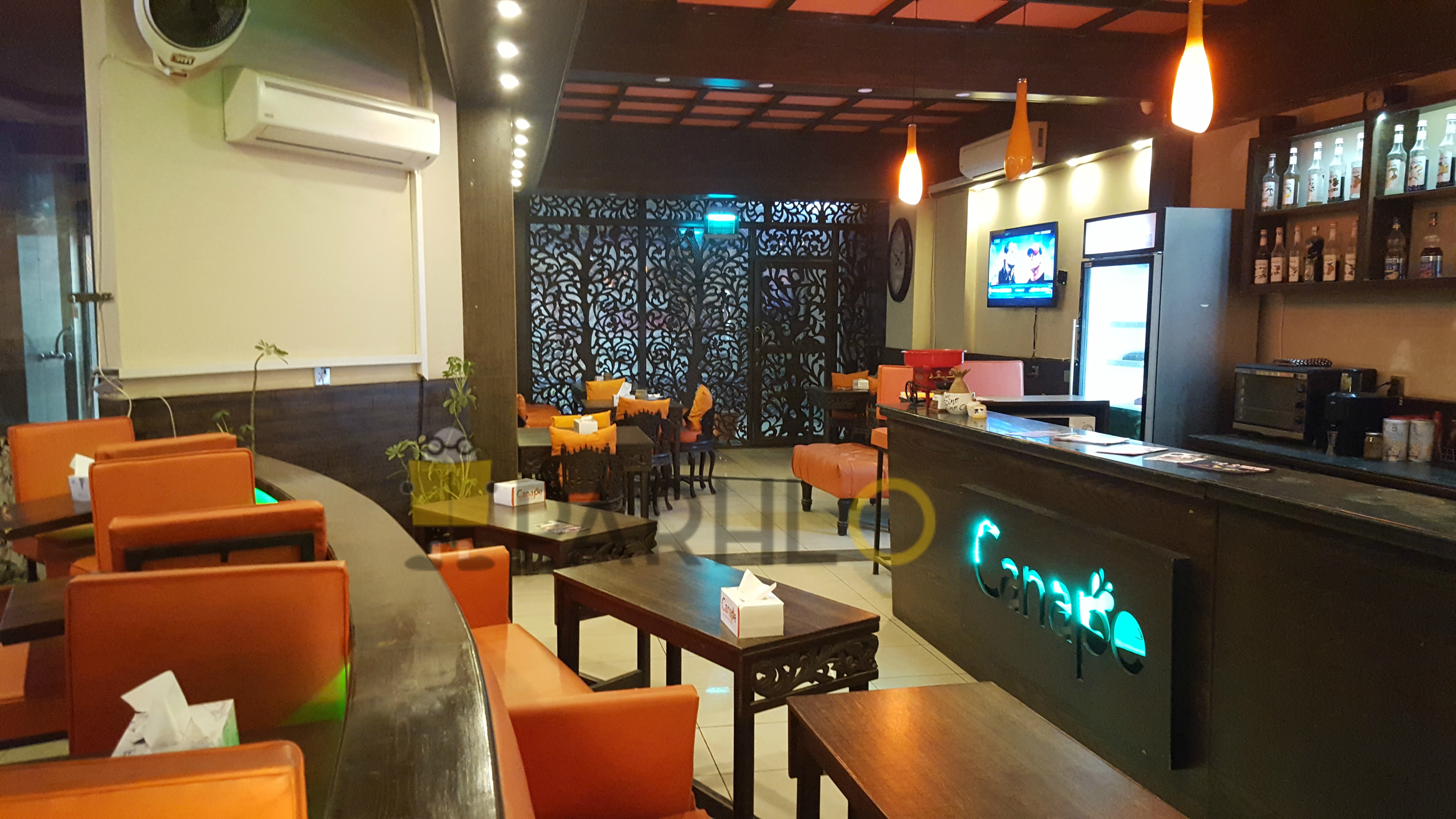 Clean area, alert and friendly staff, is a point to note for the place. Orders do not take too long to arrive, an average 20 minutes of wait is quite normal. However, unlike other restaurants Canape offers its customers a variety of board games to play while their orders are prepared. Therefore, instead of getting lost in your cell phone apps and watching their TV, a group of friends can enjoy playing Ludo and other games. This, I must admit, is a clever way to distract people from keeping track of waiting time. 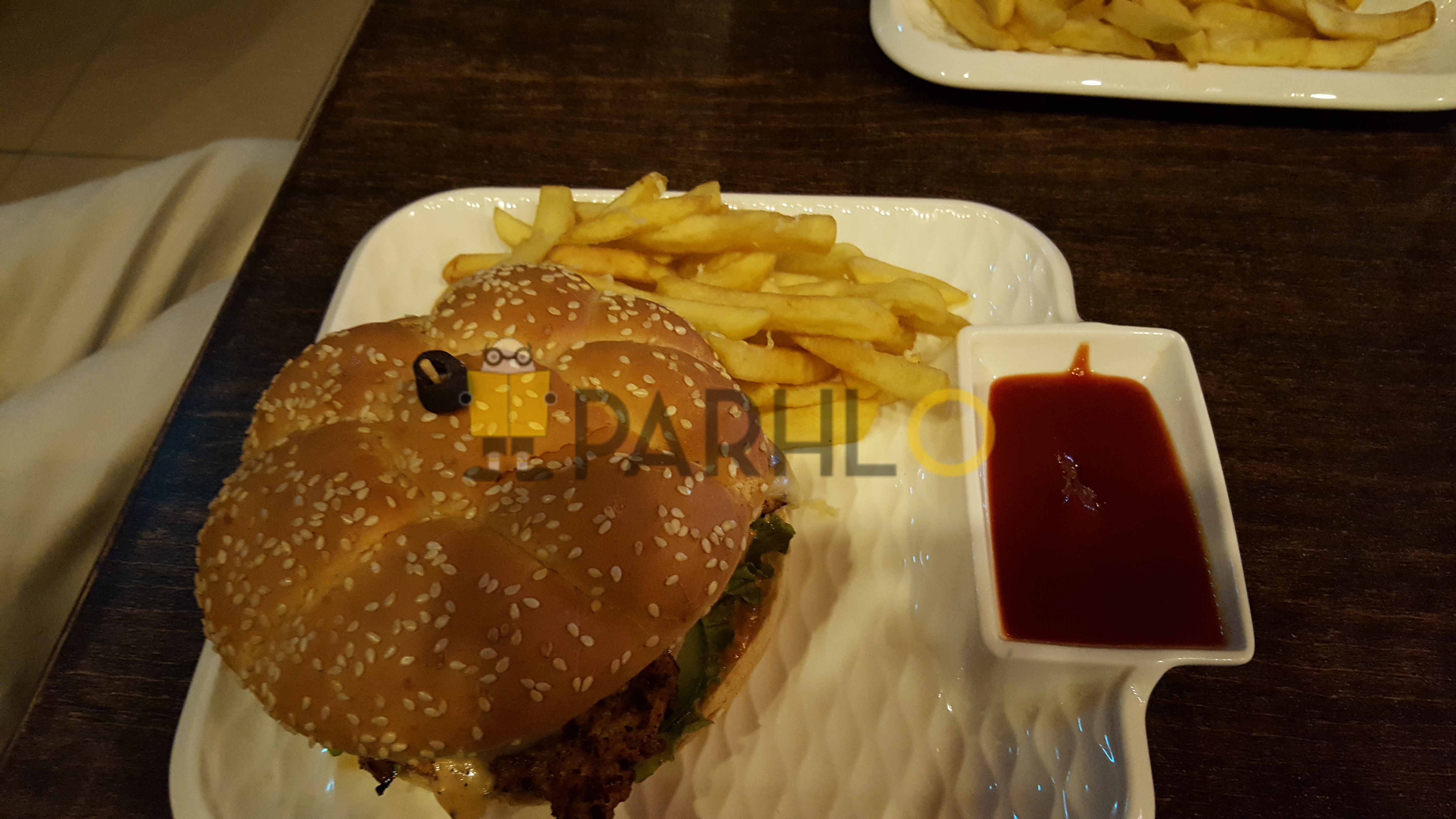 It is about time we move on to food, and that is what we will do now. We had the pleasure of ordering Special Melted Grilled Sandwich, Double Crispy Burger, and Grilled Chicken Burger. The grilled burger topped the ranking amongst the three due to its juicy patty, excellent sauce and just the right amount of additives. The double crispy burger can be imagined just like KFC’s Zinger Stacker, however, this is bigger in size, but unfortunately a bit dry. Even though this is good to eat as well, opinion is a missing sauce that must be added to fill the crispy layers of double patties present within the buns. Credits have been given for managing the oil absorption of the crispy patties, as they were only slightly oily. 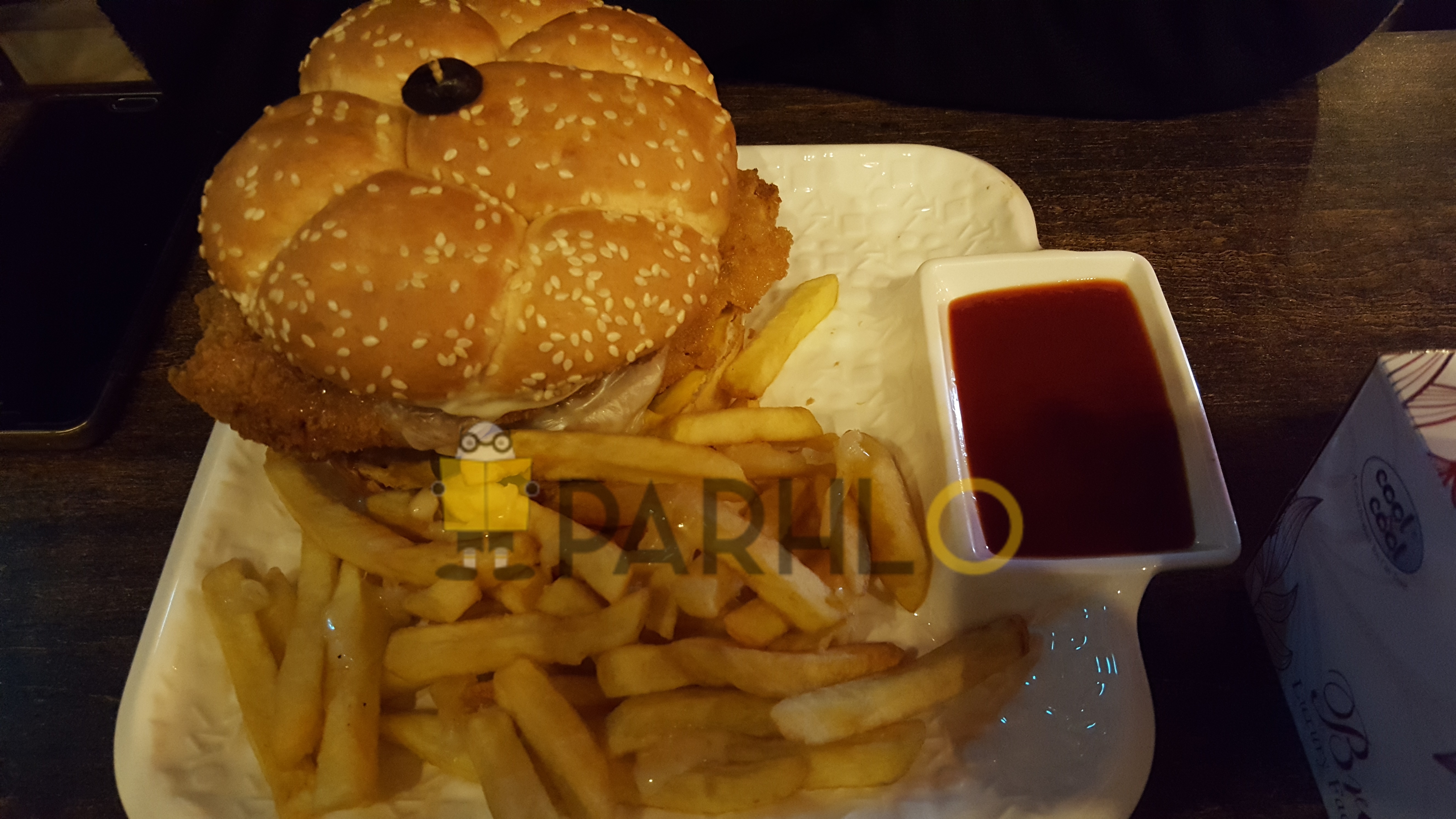 As for the sandwiches, the mouth is filled with cream and chicken and tomatoes the minute you bite it. However, unlike burgers who can work well with sauces, this sandwich clearly did not as it was hard to handle, bread slippery which later became soggy due to sauces; even the toothpicks did not hold the layers together. Nonetheless, if it is the taste you seek, you cannot be disappointed. 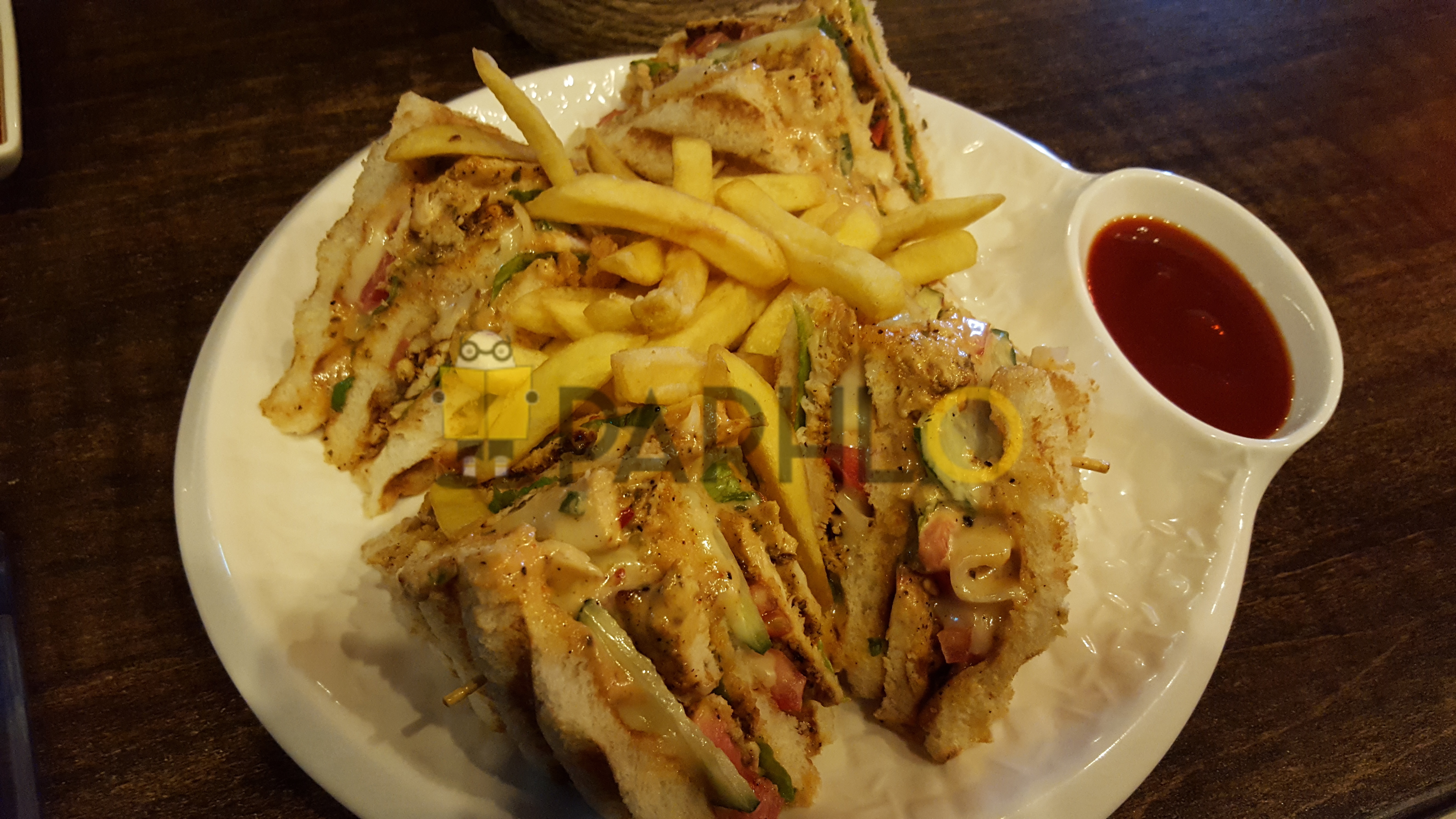 The meal was served with plain fries and ketchup, which was strange because beverages had to be ordered separately. Although there is an option of choosing different flavors of fries, they had to be ordered as a separate meal, meaning the fries being served with burgers and sandwiches cannot be replaced. It will be interesting to see someone eating that much amount of French fries just to eat Mayo Garlic fries with a burger. 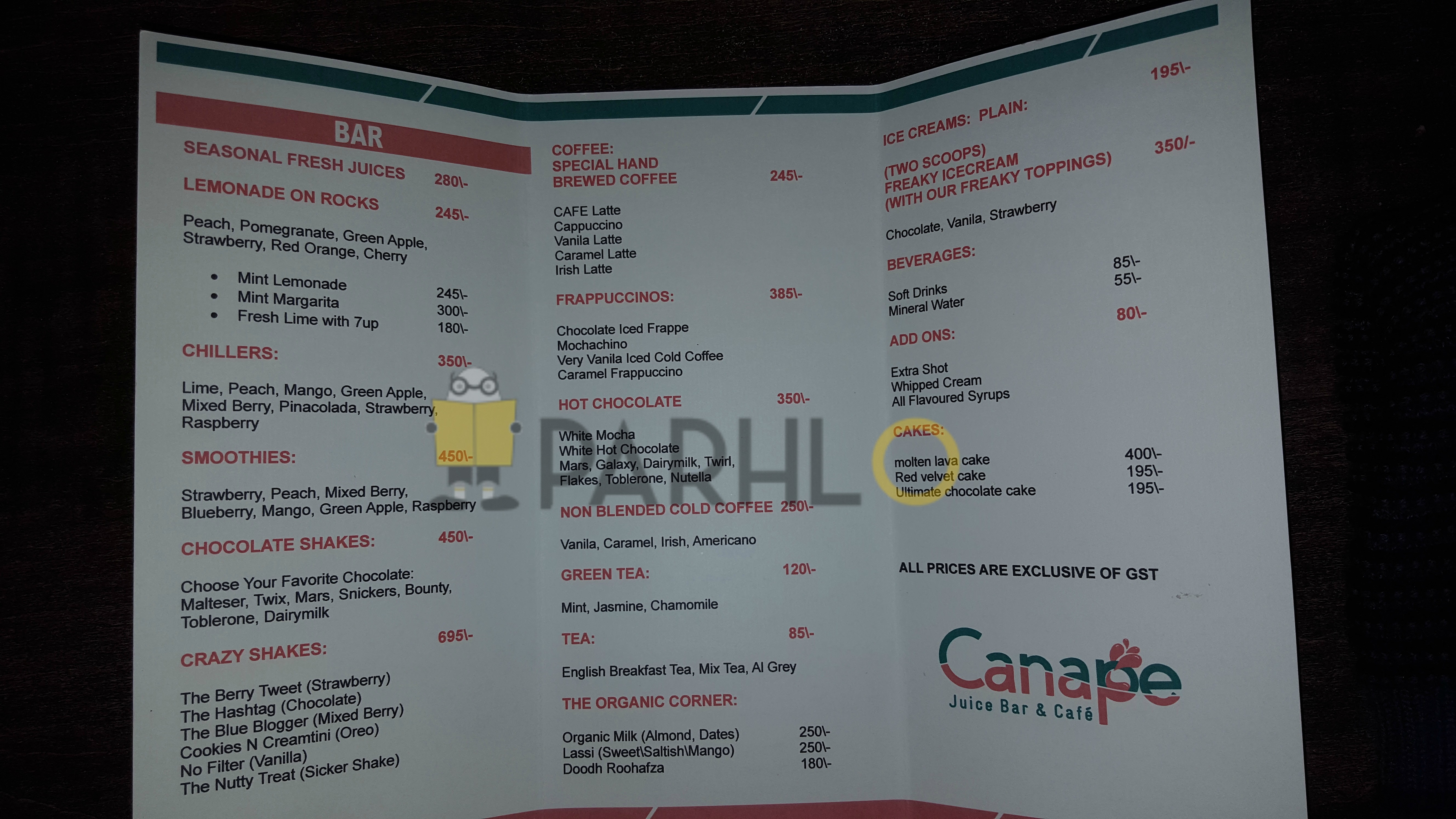 The meal was followed by their signature food, the monster milkshake. Hashtag Chocolate was ordered although there are other flavors as well, and the manager was kind enough to inform that it serves 2-3 people. Honestly, people have been complaining about the price, and looking at how much they pay for molten lava cakes, it is believed that a milkshake that serves 2-3 people has a well-justified price tag. 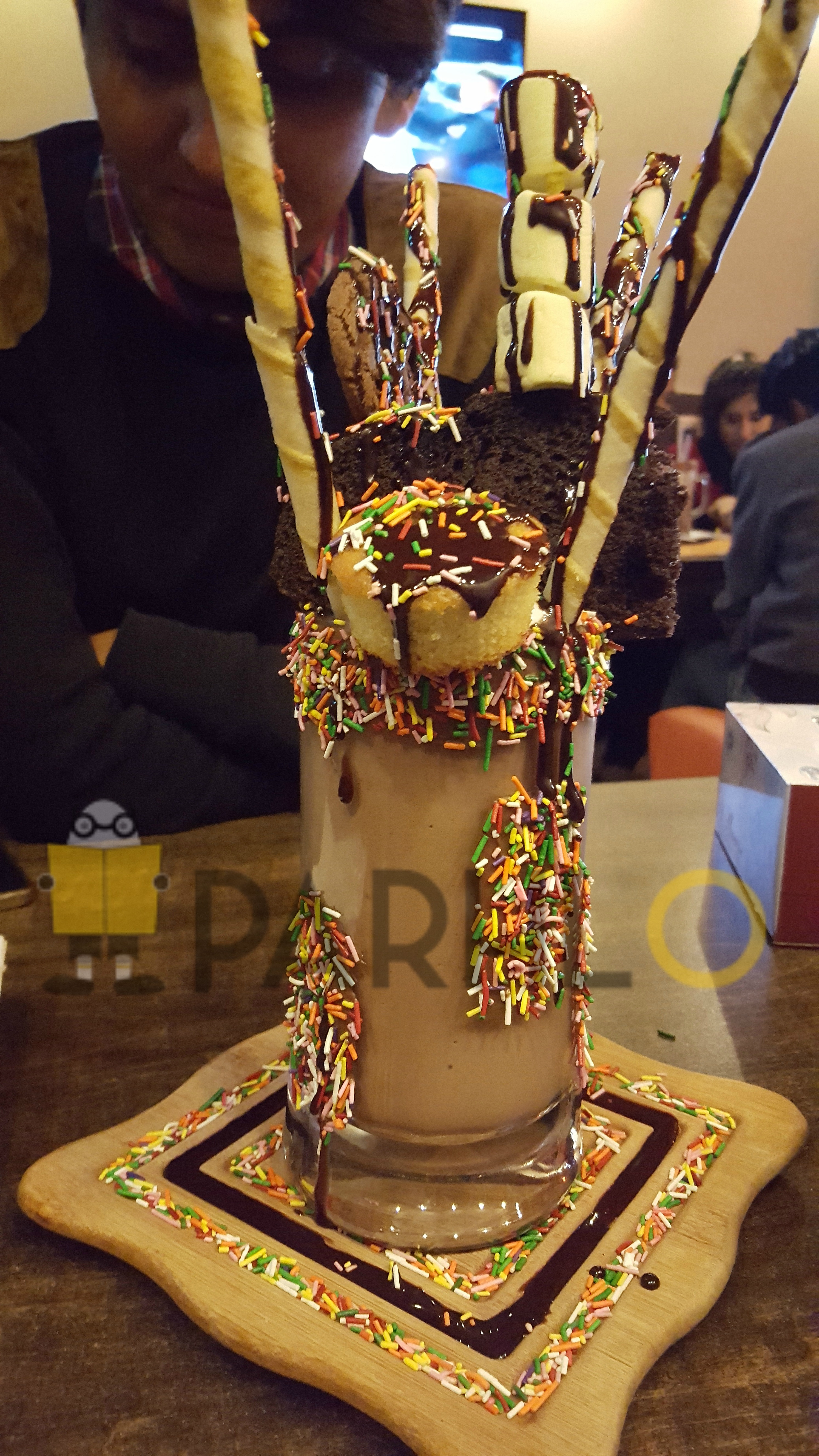 Although the decoration of sprinkles may put off a few people, it is what inside that matters most. Topped with wafer sticks, marsh mellows, a cupcake, a KitKat bar, and a brownie, this alone can be considered as a dessert. Nevertheless, the cupcake seems to give an impression of being one of Hilal CupKake, which is debatable. The milkshake was thick and chocolaty. Just the right amount of chocolate, nothing too excessive or lacking. The taste of the milkshake depends on the way you dig down towards the bottom, as eating a KitKat first might not give you the sweetness of milkshake later. Packed with a humongous amount of calories, an average person may not finish this alone. 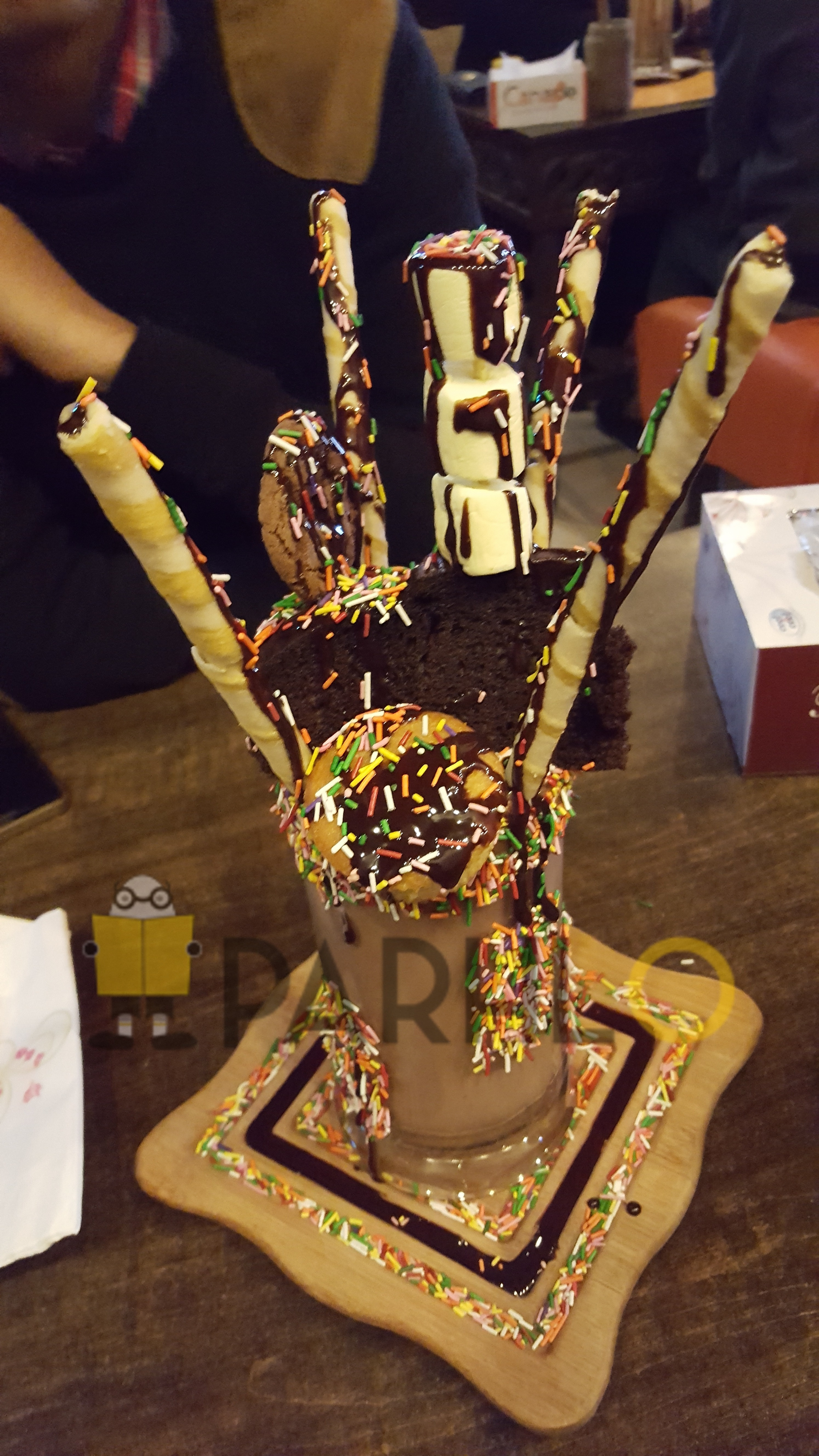 The kitchen was clean, the counters shiny and no grease could be found. The refrigerator was organized and well dusted when visited. The benefit of the doubt has to go to the entire staff, and credits have to be given for this as well. 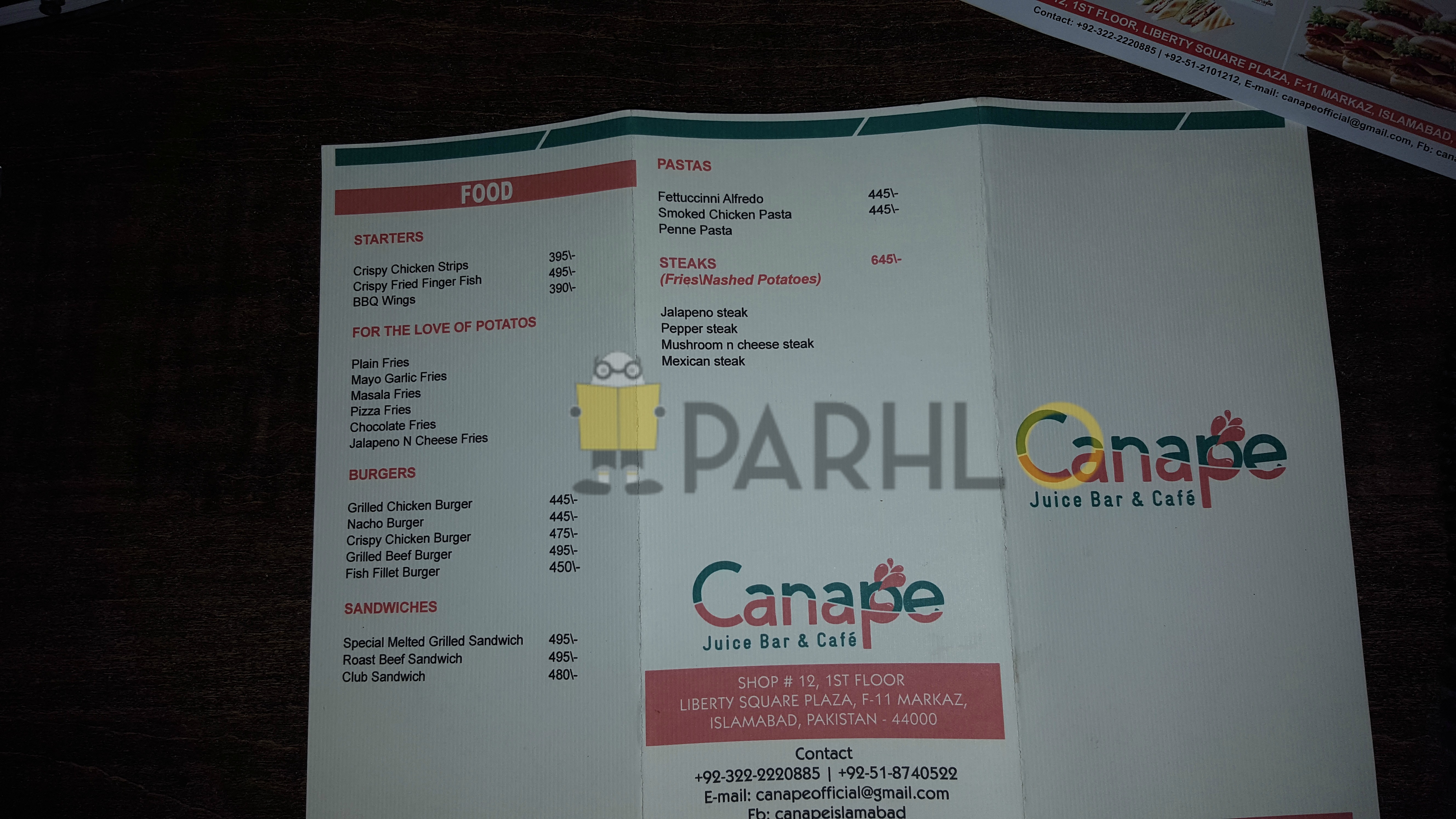 Ultimately, it was a nice experience. A small seating arrangement ensures a cozy environment with slight chit-chatting voices of customers, ensuring a nice time. However, this can be made better if background music volume is lowered and quality of music is enhanced. Seats may need to be made more comfortable although we were seated quite comfortably; however, the same cannot be said about majority people. With average prices (not so high or low), interesting menu, Canape is definitely progressing. It’s been only around half a year (more or less) since its opening, and already it’s providing respectable quality of food, cooked in a decent cooking oil. Therefore, with an overall rating of about 7.5 out of 10, one should check the place out!