Just yesterday, ARY Digital got into heaps of trouble for the racist content that was shown in their widely popular sitcom Bulbulay. It happened so that the comedy show had made fun of the Pashtun community without noticing that the jokes were a tad bit racist. The video went viral and people started to call out ARY Digital for their indecency.

Many even pointed out that there are many celebrities that belong from the Pashtun community and mainstream racism is something that has been a part of the community for a long time.

In fact, Twitteraties were enraged to see such an insensitive portrayal of the community on the show, Pashtuns were being stereotypically shown as ‘terrorists’ and ‘drug jesters’. Within minutes, people all over Pakistan were commenting on the matter and sharing their discontent and disappointment on the matter.

It was indeed upsetting and disturbing to see how much a small aspect can be hurtful to people. Hence, it is always important to make sure the content that is portrayed is not of a sensitive subject

Finally, it seems that people in Pakistan are truly changing. From arresting criminals on time to media people apologizing for their mistakes. Nabeel took to social media where he humbly apologized for the insensitive joke.

He mentions in the video that as soon as he learned about the mistake they had made, he is extremely apologetic. He also clarifies that there was no intention of hurting anyone’s feelings. In fact, the entire show is only for the purpose of entertainment. It is suitable for all viewers from the age of 4 to 80 to enjoy.

There are basically some characters in the show which are not portraying the entire community or anything. Rather, they are just a simple funny character. For instance, ‘the funny doctor’ or ‘Sher Khan’ is basically to create humor in the show. Not to hurt anyone’s feelings.

In addition to that, he also thanked his followers and fans for watching the show. Thus, he is thankful to all viewers for showering them with so much love. He mentioned that it was truly an honor to work with such a loving cast and also having so many supporters. 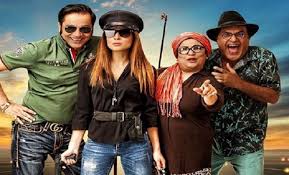 Bulbulay has been one of the longest and most humorous sitcoms on ARY Digital. It is truly admired by all especially with its hard-working and great cast.

Let’s hope that the people are not to judgemental after actor/producer Nabeel‘s statement. For what is worth, at least we are getting to see people accepting their mistakes and clarifying their stance. For now, let’s just enjoy the show and hope they don’t make the same mistakes again.

Fawad Chaudhry Thinks That He Is The ‘Imam’ of Science, Says Mufti Muneeb
Are We Ready For The Third Spell Of Monsoon Rain In Karachi? Yes, It Is Coming!
To Top