This Is How The Budget 2019-20 Will Affect Your Salaries, And How Much You Will Pay In Tax!

Payment of taxes plays a vital role in the stability of any country’s economic hold. From the lower class to the government officials, every person earning is considered liable and is responsible to pay taxes. Pakistan’s tax collection system has become extremely weak in the past 10 years which has hit the country in the form of delayed economic progress.

The budget was announced on Tuesday by Hammad Azhar, Minister of State for Revenue!

The budget for the fiscal year 2019-20 was released by the governing political party Pakistan Tehreek e Insaf (PTI) earlier this week. Most part of the announced budget comprised of a percentage of salaries being cut from the Prime Minister Imran Khan’s Cabinet and that there will be no raise in salaries of the PM and the President of the state. The awaam looked satisfied with the decision and Imran Khan gathered a lot of praise.

A major chunk of the budget speech was covered with the taxation process for the working class of Pakistan. Revised policies for taxes on salaries was announced by the PTI government and the list does make sense. In the last year’s budget, nationals with an annual salary of Rs.1.2 million were excluded from the income tax payment list and were considered ineligible for paying taxes.

Also read: For The First Time In History, PM Imran Khan And His Cabinet Will Reduce Their Salaries By 10%!

No tax to be applied on Pakistanis earning under Rs.600,000!

In the recently announced budget, Pakistanis earning more than Rs.600,000 monthly in the form of salaries are to pay 5 percent to 35 percent tax accordingly. Whereas, the target for non-salaried individuals has been revised to Rs.400,000 annually. It has been instated that persons earning Rs.600,000 or less will not pay any taxes on their salary.

A specific amount from the salary plus the income tax percentage has been set according to the earnings. Following is the proper set of how much Pakistanis will pay on their salary earnings.

Here’s the tax rate displayed according to the salaries earned: 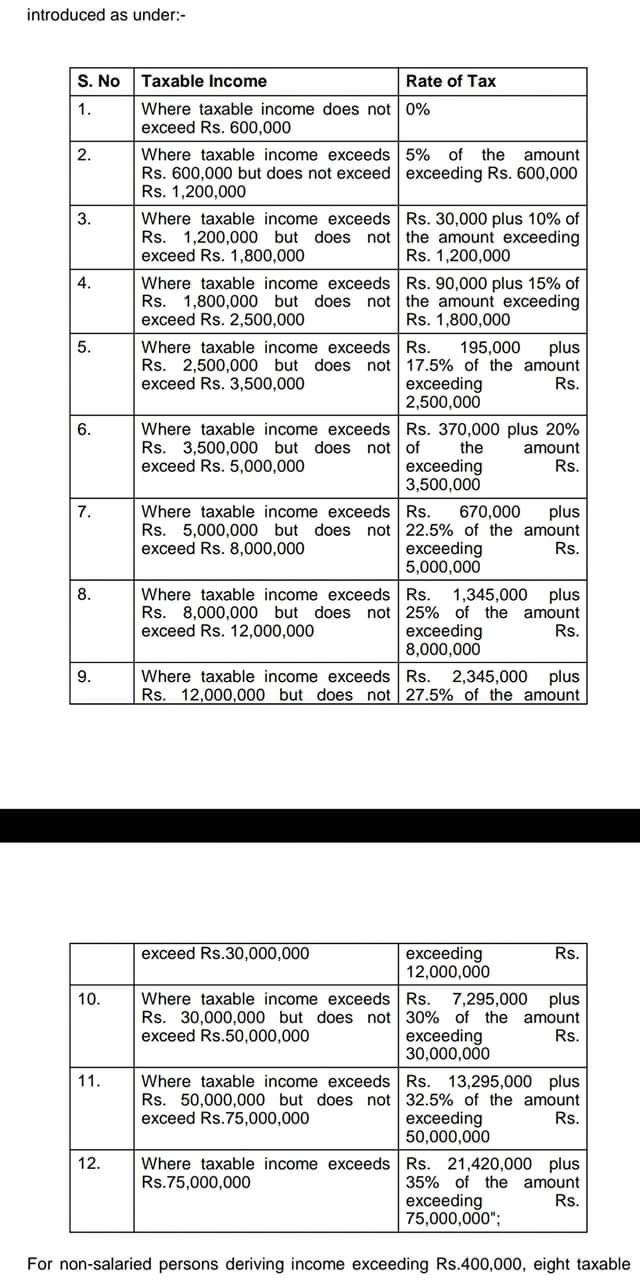 The government took the decision to ensure there be no tax fraud in the future and that the economic condition of the country gets better.

10 Nostalgic Things We Miss About Ramadan Kareem!
A Man From Karachi Tried To Blackmail His Ex-Girlfriend.. What Her Husband Did After Finding Out Was Unexpected!
To Top