Several parts of the world including Pakistan have been under strict lockdown for nearly two months due to coronavirus. In between the economic crisis and people losing their jobs, the crime rate is now seeing a visible spike.

Every now and then, videos of robbers looting some innocent citizens in broad daylight and no one to help circulate on social media. Earlier, a bunch of street criminals thrashed an old lady in Karachi during a snatching attempt and the CCTV footage was brutal. Well, this time, it’s the other way around as the victim has become a hero after retaliating with the snatcher.

The victim becomes a hero

It’s rare to see someone standing tall in front of a loaded gun alone and fight to get his looted belongings back. Currently, the clip from an installed CCTV camera nearby is making rounds on social media gathering praises. The place of the incident is still yet unknown but comments are that it happened somewhere in Punjab.

As seen in the video, the initial victim was on his bike when he was blocked by the street criminal on another bike. After stopping him, the snatcher, from under his shawl shows pistol to threaten and rob off the citizen. However, the situation got a bit extreme when the victim decided to retaliate and attacked the criminal ready to flee from the scene.

After launching the attack, the citizen, at first, snatched the gun to stay safe from any brutal consequences. Apparently, during the beating, the snatcher even tries to escape but the citizen drags him along with his bike on the ground. Eventually, with all the chaos happening, residents and bypassers started to flock to inquire about the situation. 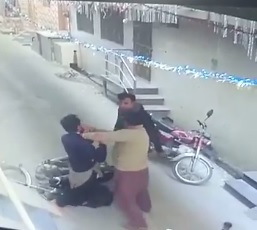 Well, this is neither the first case and nor will it be the last, and the increasing crime rate these days is alarming. Certainly, the ‘victim becoming a hero’ isn’t something we see every day but is extremely dangerous as well. Normally, when a gun is pointed towards a person, he/she loses the capability of thinking but hats off to this brave man who stood against the crime.

Since the lockdown is currently at ease, such criminal activities have become an everyday activity that needs to stop. Previously, a group of robbers went viral for snatching meat from shops along with the present cash.

We will also urge citizens that they must not risk their lives. The law enforcement agencies should take action against such incidents and provide better security conditions to the masses.