The value of women in India continues to deteriorate day by day. The country with the most rape cases on the planet, India has surpassed all means of humanity. In the last couple of days, screenshots of an Instagram group have been going viral on social media.

The group called ‘boys locker room’ was the top trend on Indian Twitter. The leaked screenshots from the group suggested that a handful of boys from India had started the group to share profiles of women and make derogatory remarks.

It is pertinent to add here that these students from the group are not old, but 16 and 17-year-old boys with raging hormones. In the screenshots, the boys can be seen making cold remarks at women and their bodies, displaying their sexual desires. 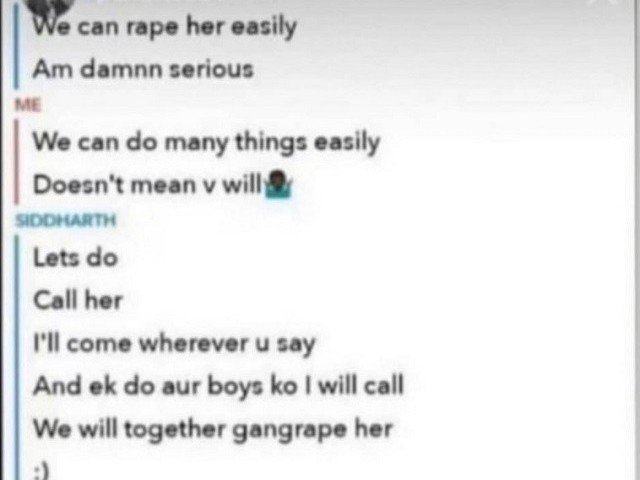 Since the screenshots went viral, Delhi Police had taken suo-moto action to apprehend the culprits. Consequently, with the help of social media, these young boys were marked out and the first arrest was made. A 15-year-old boy was arrested for running the group chat and making rape claims against girls.

DCW has issued notice to Instagram and Delhi Police in the matter of a group named “boys locker room” being used by some miscreants to share objectionable pictures of minor girls and planning illegal acts such as gangrape of minor girls.All the people involved in this act should be immediately arrested and a strong message needs to be given out. #BoysLockerRoom

The group featured 22 members from different cities of India. All hailing from prominent schools and good families. It is alarming how even the youngest of boys coming from well-off families in India dream of raping women. This disgraceful mark was previously blamed on ‘illiteracy’. However, it seems like the case in India is something else altogether.

Moreover, there were two adults present in the group as well, who belonged to prominent colleges in Delhi.

One of the most heartwrenching remarks made on the group chat was by a boy who wanted to ‘gang rape’ his classmate, a girl. This was followed by sharing her pictures in the group, along with others making derogatory statements as well.

Thread: Students who are 16, 17 years old, are casually talking of gang raping girls and women, swapping nudes without the consent of these women on Reddit, with not even a hint of fear of exposure. The dire crisis of rape womxn face, starts with this rape culture #boyslockerroom

Furthermore, per the police officer, the charade was exposed after one of the boys forwarded the screenshots to someone else. It is where the domino effect began. The whole ordeal, initially, was exposed on social media by one of the girls being talked about in the ‘boys locker room’.

Also Read: These Girls From Karachi Sexually Harassed Me And I Couldn’t Do Anything About It!

Smoking Sheehsha Can Cause Divorce: Know-It-All Allama Naqvi’s Back At It Again
Social Media Claims The City School Has ‘Terminated All A-Level Faculty’
To Top