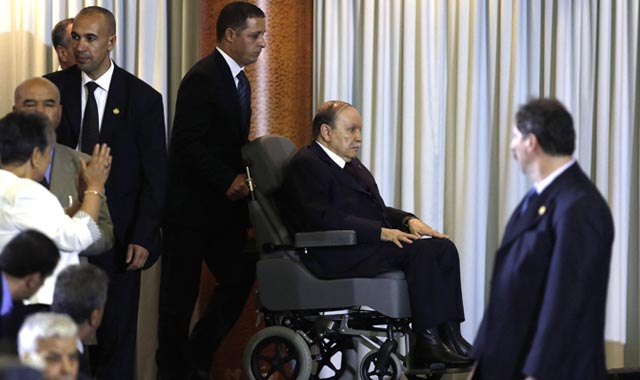 Abdelaziz Bouteflika has been sworn in as Algeria’s President for a fourth term, as opposition parties boycotted the swearing-in ceremony.

Sitting in a wheelchair, a year after suffering a mini-stroke, Bouteflika recited the oath in a hoarse voice and briefly thanked voters on Monday.

“I thank the Algerian people for their renewed confidence,” Bouteflika said in his first public speech for at least two years.

“The April 17 election was a victory for democracy. It was a lesson in democracy,” he added.

The seventy-seven-year-old, who rarely appears in public, promised national reconciliation in his speech.

Bouteflika, who has been in power since 1999, received more than 81 percent of the vote in the April 17 presidential election, despite not even taking part in campaigning.

The election was marred by low turnout and claims of fraud by his opponents, including main rival Ali Benflis, who received just 12.18 percent.

The opposition boycotted Monday’s swearing-in ceremony, including five parties that had called on their supporters to stay away from the election.

Among the absentees was Benflis, who refused to recognise Bouteflika’s re-election, saying doing so would make him “complicit in fraud”.

Other parties that boycotted the election have since united into one front, calling for a national conference on May 17 to discuss a political transition.

Such a transition would include changes to the constitution such as imposing term limits, increasing parliamentary power and strengthening the judiciary.

Despite this, Bouteflika remains popular with many Algerians who credit him with helping end a devastating civil war.

But the president has faced an increasingly united opposition demanding political changes with his recent reign dogged by ill health and corruption scandals.

Algeria is experiencing high youth unemployment and the threat of al-Qaeda in the southern desert, and there have been fears over the president’s ability to govern in light of his health problems.