From the past few weeks, the rise of Blue Whale Challenge game has taken its toll on concerned individuals, especially the parents. The challenge game gives different tasks to the players, which includes hurting and cutting their arms, forming the shape of a whale. 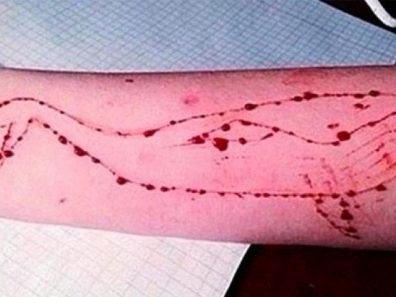 After accomplishing different levels, the end level is said to be the level where the player commits suicide. The game begins with simple tasks such as watching a horror movie and such acts. To note the levels they are on, the individual has to cut their arm, eventually forming the shape of a whale. The final step is to kill your own self. This can be verified by how around 130 individuals in Russia were provoked to take their lives.

The self-harm game reached the dark internet space in Pakistan as recently three people in KPK were reported to have played this game. However, this time two female students in Jehlum were found having cuts same as the Blue Whale Challenge game.

Minahil, a 1st-year student, and Warda, a 2nd-year student were expelled from Government Girls Degree College Pind Dadan Khan as the college administration did not want them to influence other students. According to Express Tribune, the females were on 18th and 22nd level respectively.

The parents of the two females were informed after which they were asked to leave the college in the light of their self-harm patterns.

It is advised that patterns look at their children and instantly report them to a psychiatrist if they find any pattern or clues that they are playing the insane game. Till the time it is taken off the internet, we need to be observant and take care of people around us.

This ‘Zombie Drug’ is Turning People into Cannibals and it is nothing but Scary!
The Untimely Death of This Man Gives Us a Grave Lesson about Life in Karachi
To Top