The bold and straightforward attitude of Pakistan’s legendary pacer Shoaib Akhtar has yet again stirred an online debate. While co-paneling in sports shows, the bowler made some controversial revelations regarding cricketer Danish Kaneria. As always, a BJP official, Priti Gandhi poked in and got schooled for trying to ‘falsely’ accuse the then Pakistan cricket team.

However, it isn’t something new coming from biased India as its hateful approaches against Pakistan and others are now evident. Earlier this week, Australia’s Dennis Freedman exposed India’s ‘hypocrisy’ against speedster Shoaib Akhtar. Regarding the earlier stance, Priti Gandhi of BJP is facing backlash for spreading fake news regarding Pakistani cricketers.

Check out what the BJP official posted!

Without any confirmation or crosschecking, Priti Gandhi posted an old picture of the Pakistan cricket team with a crappy caption. Using hashtag #IndiaSupportsCAA, she wrote, “Picture of Pakistan cricket team during Inzamam-ul-Haq’s captaincy. Hindu Danish Kaneria & Christian Yousuf Youhana were asked to offer Namaz.“. In the picture, the squad can be seen praying after offering Namaz along with captain Inzamam Ul Haq.

Apparently, the BJP official, in her post tried to show Pakistani cricketers ‘unfair’ towards the non-Muslim players. Well, it turned out to be bogus accusations as Twitteratis schooled Priti Gandhi on her lack of knowledge and identification. Labeled as Danish Kaneria in the tweet, turns out to be Abdul Rauf who was a professional physiotherapist at the time.

That’s how it ‘actually’ goes!

Arey @MrsGandhi ji,😂😂
That's not Danish Kaneria, But Abdul Rauf (Physiotherapist ) and others offering prayers before net practice in Bristol. And Yousuf Youhana had already changed his name to Mohammad Yousuf by then. pic.twitter.com/15lrGfa2gl

Hello who is Kaneria here? 😂😂😂
And Yousuf converted from Christian to Islam in 2005, and this pic was taken in Aug 2006.
Better luck next time

This is what happens when u have cow dung in ur head. There is no danish kaneria in this pic. Danish was involved in match fixing therefore he was banned from playing cricket. Upgrade ur whatsapp university. Thank u

That's not Danish Kaneria, But Abdul Rauf (Physiotherapist ) and others offering prayers before net practice in Bristol. And Yousuf Youhana had already changed his name to Mohammad Yousuf by then. pic.twitter.com/vkhWPLuS9A

The miserable Indian government, spreading lies all over!

Need to carry out homework before venturing for propaganda sort of thing lady!Yousaf is one of the finest players who became an inspiration for even muslim peers. U seem to be direly ignorant of cricketers.Danish is not in the set.
lastly Muslim prayer is never forced upon!

Thankfully, in this advanced digital era, people have the power to correct the facts and not to believe in stories based on lies. Certainly, there are several controversial aspects related to Danish Kaneria which he faced during his cricketing days. Since Kaneria’s religious differences still stand tall on mainstream media, Shoaib Akhtar, spilled some more beans.

Since the stance is now clear, hopefully, Priti Gandhi would have learned a valuable lesson for her cheap accusations made. As per Shoaib Akhtar’s recent statement in a sports show, Danish Kaneria wasn’t treated fairly in the team because of being a Hindu. Moreover, it was also revealed that some teammates would not even eat with Kaneria and discriminated against him. 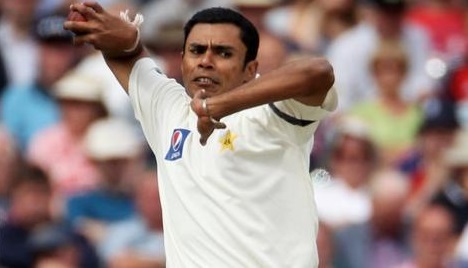 Later, Shoaib Akhtar’s statements were seconded by Danish Kaneria himself calling them all to be factual and true. Previously, during the Pakistan vs Sri Lanka series, Shoaib Akhtar even criticized the selection committee for ignoring cricketer Fawad Alam. Fortunately, the national squad lifted the winning Test trophy at home after nearly a decade.