One of the biggest political party of India BJP (Bharatiya Janata Party) is known for its extremist Hindu views and narratives. One of their members from the women’s wing of the Bharatiya Janata Party made disgusting remarks against the Indian Muslim women that have definitely caused an uproar and shocked everyone.

According To Her Facebook Post, She Suggested That Hindu Men Should Enter Muslim Homes And Rape Their Women.

“There is only one solution for them (Muslims). Hindu brothers should make a group of 10 and gang rape their (Muslims) mothers and sisters openly on the streets and then hang them in the middle of the bazaar for others to see”

She said this is the only way to ‘protect India’. In her own words, “Muslim mothers and sisters should have their honor looted as there is no other way to protect India”. 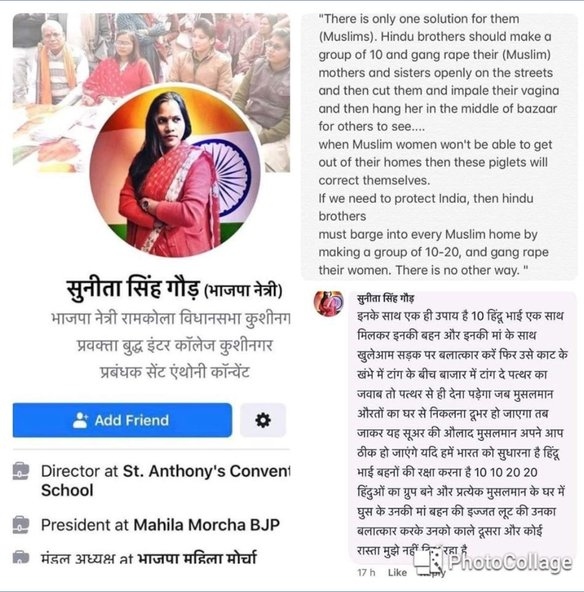 Sunita Singh Gaur is the name of the woman in question. Her Facebook post has been removed along with Sunita from her position. BJP Mahila Morcha National President Vijaya Rahatkar responded and said, “Be assured, BJP Mahila Morcha will not tolerate any hateful comments whatsoever from any karyakarta. The lady in question has been expelled even before you tweeted”

Be assured, BJP Mahila Morcha will not tolerate any hateful comments whatsoever from any karyakarta. The lady in question has been expelled even before you tweeted. pic.twitter.com/r4xIx6AHGG

On June 27th, her removal for “anti-party activities” was announced by the district chief of the BJP’s Mahila Morcha Chandraprabha Pandey and was shared by Rahatkar through a tweet.

This is extremely alarming and disturbing. Her removal doesn’t change the fact that a BJP member openly instigated sexual violence against Muslim Indian women. Encouraging rape and that too gang-rape online is a wake-up call for the entire world to see Indian Extremists for who they really are. Rape counts are extremely high in India and with their own leaders calling out to Hindu men to commit such atrocious crimes on a mass level should be immediately taken into account on an international level.

As for Sunita Singh, her spewing such hate against women is disappointing and shocking, to say the least. No sane woman and that too belonging to such a big political party of a state would say such a thing. Clearly, she needs to be examined and diagnosed.

Also Read: BJP LEADERS THRASHED EACH OTHER WITH SHOES ON LIVE TV AND PAKISTANIS ARE LAUGHING SAYING “YEH HUMSE LARENGE!”

Yasir Tragically Passed Away In A Road Accident And His Sister’s Message Shows The Pain He Left Behind!
Rich People In Pakistan Are Keeping Exotic Animals In Homes
To Top