There’s no doubt that the political space of Pakistan holds many entertaining elements that are way too far from rationality. Certainly, that’s what makes the ongoing political rivalry in Pakistan, a bit interesting and exciting.

Over the years, the Pakistan People’s Party (PPP) has lost its credibility as the promises made to the masses were never fulfilled. Well, it’s not hidden that the current Chairman of PPP, Bilawal Bhutto Zardari gets judged on his masculinity from time to time. However, this time, a party representative got offended in a live show after Bilawal was called ‘Farzande Zardari’.

Ruling the province of Sindh for decades, PPP has always been on the chopping block for its poor performance. Currently, the condition of interior areas of Sindh is extremely rotten and the rulers are still not ready to pay any heed. However, in a recent appearance in a talk show, PPP’s Nafisa Shah tried to take on PTI’s Murad Saeed over a petty issue.

MNA Nafisa Shah was recently presented in anchorperson Kashif Abbasi’s talkshow with two other representatives. While presenting her point of view, Shah turned towards Murad Saeed (who was not even present in that session). Calling names in politics isn’t a new thing but PPP MNA doesn’t seem to know what ‘Farzande Zardari’ actually means.

The argument that doesn’t matter

Presenting her naive opinion, Nafisa Shah stated, ”At first, what Murad Saeed said should be presented among the general public for opinion. He (Murad Saeed) ironically called (Bilawal) ‘Farzande Zardari’ numerous times and keeps repeating it. Just watch Murad Saeed’s language, his tone and his nastiness. Play one of Murad Saeed’s address and ask the nation what they think about it.” 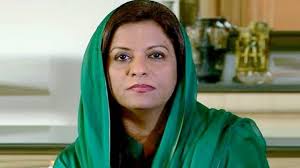 Apparently, it had nothing to do with the ongoing debate but maybe, Shah had nothing meaningful to present. Indeed, it is an alarming situation as Sindh’s future is definitely in danger as the current conditions reveal. Now, even the influential personalities are also coming forward to speak against the long-corrupt rule of PPP in the province.

Earlier this month, well-reputed journalist Iqrar Ul Hassan after analyzing the situation bashed the Sindh government. Starting from the schools to the dirty water being consumed in small towns, he said it all. its high time the Sindh government start thinking beyond corruption and actually do something for the betterment of its people.

FOODPANDA Is Bringing A Crazy 30% Discount For Mastercard Users And The Internet Is In Love!
Hareem Shah Wants To Be Halime Sultan Of PM Imran Khan
To Top